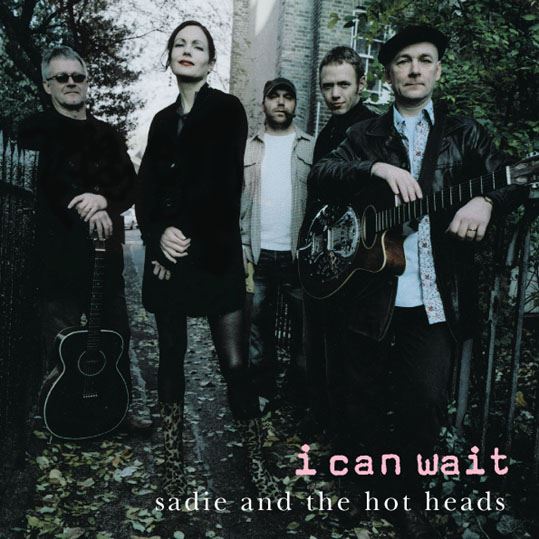 Band: Sadie and the Hotheads.
Album: I Can Wait
Contact: www.sadieandthehotheads.com
talktous@sadieandthehotheads.com
www.myspace.com/sadieandthehotheads
Sadie and the Hotheads is a new band characterized by original lyrics and a personal, idiosyncratic sound. For them, one's "Sadie" is that thing within all of us which is uniquely our own. Actress Elizabeth McGovern has teamed up with the multifaceted Nelson Brothers and an array of musicians. Their first album , "I Can Wait" has been described as "beautiful" ,"lyrical", "gorgeous", "honest" and "unpretentious". Hear it for yourself...
Elizabeth McGovern is an actress who has worked in film, theatre, television and radio. She made her professional debut in Robert Redford's ORDINARY PEOPLE, which won the academy award for best picture of the year. The next year, Elizabeth herself was nominated for best supporting actress in Milos Forman's RAGTIME, also starring James Cagney. Since then she has worked on too many projects to mention, but which include Sergio Leone's ONCE UPON A TIME IN AMERICA, Curtis Hanson's THE BEDROOM WINDOW, John Hughes' SHE'S HAVING A BABY, and most recently, BUFFALO SOLDIERS, directed by Gregor Jordan.
Simon Nelson - Guitar, Dobro
• Never had a proper job
• Ph.D in Ethnomusicology
• Session musician: Albert Hall, O2 Arena - Joss Stone, Ms. Dynamite, Heather Small, Beverley Knight, Paul Jones
• Half of songwriting duo Nelson Brothers
Steve Nelson - Guitar
• Other half of songwriting duo Nelson Brothers (www.nelsonbrothers.co.uk)
• Debut album, 'Hometown', 1993, re-mastered and re-released 2007
• Song, 'Stranger To My Heart' in British thriller, 'The Innocent Sleep'.
• Previously signed to publishers Windswept Pacific, Los Angeles
Ron Knights - Bass, Producer
• Cruise ships, West End, rock festivals, jazz clubs.
Rowan Oliver - Drums, percussion
• Goldfrapp, Paul Oakenfold
• Claims he was raised by wolves
“... it's great... perfect music for driving up the Merritt Parkway. All the playing and arrangements are beautiful. Some of it reminded me of Beck and some of Tom Waits” - Smokey Hormel
“Mesmerising debut from a band, which brings together two very different worlds. Intriguing and very catchy.” Nick Dalton. Maverick Magazine, August 2008.
“I have been a HUGE fan of Elizabeth McGovern since I first saw Ragtime. I was thrilled to discover that songwriting has been added to the resume, and even more thrilled after listening.” Ron Olesko. WFDU-FM radio station NYC
“Sadie and the Hotheads have just released a wonderfully unique-sounding album”. Irish World, June 2008
“This is very much a rocking band who play a finely-structured, semi-acoustic kind of rootsy pop. To be honest it’s difficult to liken them to anybody else.” Nick Dalton. Maverick Magazine, September 2008.