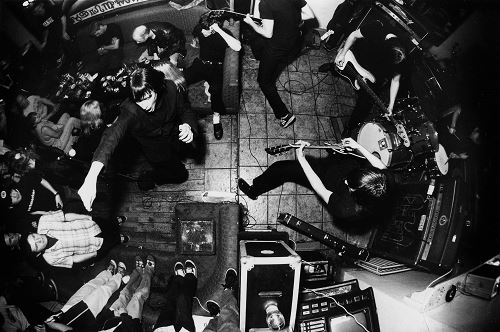 Refused is a Post-Hardcore band originating from Umeå, Sweden, formed in 1991. The band's final lineup comprised its founding members, vocalist Dennis Lyxzén and drummer David Sandström, as well as guitarists Kristofer Steen and Jon Brännström. Their lyrics were often of a non-conformist and politically far-left revolutionary nature. The band released five EPs and three albums before initially splitting up in 1998. Kerrang! placed The Shape of Punk To Come at #13 on their 50 Most Important Albums Of All Time list. Several months of heavy touring and internal stress caused the band's dissolution, after their last show in the United States was dismantled by police. Following the band split, Lyxzén went on to front the political garage rock band The (International) Noise Conspiracy.
In March 2010, Epitaph Records put up the old Refused website online with the words "coming soon." Rumors spread across the Internet about what the new website could indicate, including speculation of a reunion. Citing an anonymous source "close to the situation," Punknews.org unofficially announced that the band would perform at European music festivals in 2010. Dennis Lyxzén has denied claims of a Refused reformation as he and David Sandström are busy with AC4. The new band website was later announced to be a promotional site for a reissue of Refused's final album, The Shape of Punk to Come. The reissue, released on June 8, 2010, is a three-disc set with an unreleased live album recorded in 1998 and the Refused Are Fucking Dead DVD documentary in addition to the full original album.
On January 9, 2012, it was announced that Refused would be performing at the 2012 Coachella Valley Music and Arts Fesitval in Indio, California in April 2012. The reunion was confirmed via Dennis Lyxzen's Facebook page. Magnus Flagge, their original bassist/cellist, has also rejoined the band. Later that day, it was announced that they would also be playing at Way Out West Festival in Gothenburg, Sweden. They also headlined the Groezrock festival in Belgium. On February 29, Refused played a secret show in Umeå, their first live performance since 1998. They also appeared for the first time on TV in America on Late Night With Jimmy Fallon on July 18, 2012. On August 23, 2012 Refused indicated by a Facebook post that their reunion was for 2012 only and not a continuation of their career. On August 24, 2012, it was announced that Refused would undertake a theatre tour of Australia for the first time ever in November. The after party for Refused's final show to date, on December 15, 2012 in Fabriken, Umeå, saw brief reunions from related Umeå hardcore bands Abhinanda and Final Exit, as well as some rarely performed songs from Refused. Redd Kross also performed.
On February 22, 2013, Refused were awarded "The special prize for Swedish music exports" by the Minister of Trade. Lyxzén and Sandström chose to criticize the current Government at the ceremony, instead thanking the efforts of popular education, in particular Workers' Educational Association (ABF) and youth centers (in Sweden associated with social democracy) while Jon Brännström chose to not accept the prize on his behalf later stating he wished they "(...) had said no to the prize and instead held a press conference about why we had turned it down."
On October 31, 2014, Jon Brännström stated on the official Refused Facebook page that he had been fired from the band (the band would later state that he left the band in 2013), implying that Refused are still active and plan on performing again in the future. On November 25, 2014, the band announced that they will perform their first shows in three years at the Reading and Leeds Festivals, Groezrock and Amnesia Rockfest in the summer of 2015. Around the same time, rumors surfaced of a new album being recorded for release in 2015 after ...And You Will Know Us By The Trail Of Dead's Autrey Fulbright II posted a photo on Instagram claiming that Lyxzén had been in the studio recording vocals for the album; however this was quickly deleted.
Refused have announced a North American tour, the Freedom 2015 USA Tour, starting with their headlining set at Punk Rock Bowling and Music Festival in Las Vegas on May 24. On this tour, the band will be playing smaller clubs with ~500 capacity. They will also be touring with Faith No More in July and August, which includes a show at Madison Square Garden.