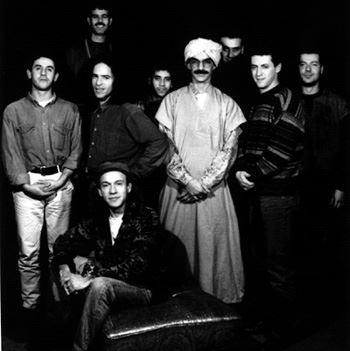 Barbés is a piece of Africa stranded in the heart of Paris, at the foot of the Sacre Coeur. It is a neighborhood of couscous and chicken, of smoke-filled bars where dominos click on tabletops, of dish antennas transmitting floods of Middle Eastern music through TV sets. In Barbés, you could have met the late Cheikha Rimitti, the grand dame of raï, on the Rue Myrrha walking back to her hotel. Or a band hired to sing at a wedding stopping to pick up their musicians at a café- The Oasis, The Délice, or The Danton.
People from every corner of Africa have crowded into Barbés, a refuge for exiles that directed Larbi Dida's raï towards Fateh's shaabi, and that brushed Aziz's guimbri up against Youcef's bass. It is encounters such as these that led to the formation of the Orchestra National de Barbés. In English, the name means The National Barbés Orchestra, implying that Barbés is a nation unto itself. It is a sentiment that few who visit the neighborhood would dispute.
The story started in Belcourt, a working class section of Algiers, Algeria at the peak of the 1980 baby boom. Youcef Boukella's older brothers listened to rock and bossa nova, people watched Cairo film classics on TV and tuned to Kabyl folk music on the radio. Outside the Belcourt alleyways --pandemonium. Street peddlers, muezzins, Gnawa street performers, shaabi concerts, ghetto blasters playing reggae, funk and raï.
"My style of music goes back to my childhood in Belcourt," explains Youcef. In 1985 he was offered a slot playing bass for the first Arabic-language rock group, T34. But when Youcef heard what visiting jazz musician Jeff Gardner was packing, that's when he decided to pack himself up and leave home. Raï was all the rage when he arrived in Paris. He worked with Cheb Mami and Kabyl native Takfarinas at diaspora parties. Safy Boutella plunged him into the vortex of underground jazz. He honed his vision while waiting to record his first album "The Greeting of Peace". This was when his genius as a producer began to reveal itself (his production). Meanwhile, with former -Raïna Raï vocalist Larbi Dida, he recorded a four-title offering that foreshadowed his future approach.

Larbi Dida comes from the town of Sidi bel Abbes and is a founding member of Raïna Raï, the rock-raï group that shook up the Algerian rock scene by zeroing in on a roots-meets-electric sound. Recognized by the Algerian media as a historic breakthrough, this group was the first rock group to use raï in its repertoire. Ever since Larba Dida moved to Paris in 1989, his has been one of the great Arabic voices in the French capital.
Aziz Sehmaoui is another pillar upholding Youcef's vision. Raised in Marrakesh, this Sufi was nourished on a combination of Gnawa Arab-African beats and British-American pop performed in Morocco with various traditional and electric groups. (Association Ziriab, Lemchaheb and others). Like Youcef, Aziz attempts to weld the mystical power of healing rhythms with today's sounds. As the custodian of spiritual rigor and technique, he infuses the music with an aura of native authenticity molded by the luminous candor of his voice.
The band:
Medehi Askeur, Fateh Benlala, Ahmed Benshidhum, Yusef Bukella, Alain Debiossat, Jean-Baptiste Ferre, Fathellah Ghoggal, Olivier Louvel, Taufik Mimuni, Michel Petry, Asís Sahmaui, Kamel Tenfiche. Discography:
En Concert (Virgin 844 009 2, 1997)
Poulina (Virgin 847 553 2, 1999)
Alik (Wagram 3130492, 2008)
Rendez-Vous Barbes (Le Chant du Monde CMD 165, 2010)