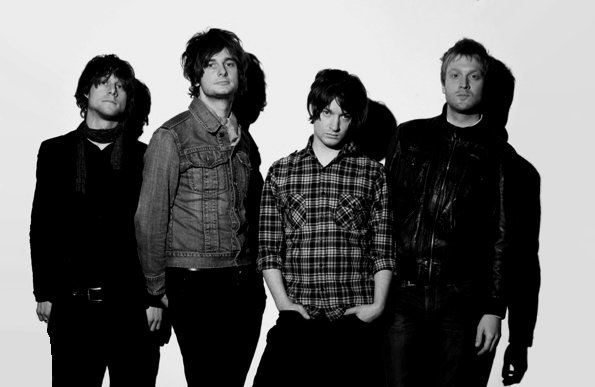 Manchester, UK’s epic, soulful pop craftsmen Mutineers proudly present their hotly anticipated debut album Friends, Lovers, Rivals, a breathtaking collection of infectious, colossal potential hits set to inspire a heart-stirring musical future.
The band’s brief history has been spent building a glowing reputation and loyal fan base mostly by word of mouth, utilising the assets of internet, gigging and – fundamentally – the classic songwriting power of their music, slices of towering anthemic pop to match anything in the international armoury of The Killers or prime R.E.M..
The quartet’s story starts at the beginning of 2009, when four drinking mates with an already impressive history decided to pool their talents. Vocalist Nicholas James Mallins had previously fronted the hotly tipped Cardinals alongside bassist Iwan Gronow, who had also spent time in the revered ranks of Haven and Johnny Marr’s The Healers. Recruiting guitarist Michael Reed and former Haven drummer Jack Mitchell to the tight-knit fold, it then took mere months to craft an album of towering anthems, with results which recall the shimmering grandiosity of Echo and the Bunnymen or the aching simplicity of Lloyd Cole, channelling the genius of past greats and forging it into something very much of their own making.
Recent support slots with the View, Wintersleep, Pete Doherty and Bernard Sumner’s Bad Lieutenant have opened the band up to a wider audience. Now, with the debut album recorded in the Welsh valleys and the ever inspiring city of London, Mutineers are ready to truly arrive.
Friends, Lovers, Rivals is a deeply personal, engaging album able to deliver sucker punches with beautiful grace. “It’s not my infidelity, its just you never suited me” Mallins sings on the album opener quickly countered with: “Beware my lack of social skills, my tired lines they’re over used”. On the storming album closer and firm fan favourite Hyde Road Mallins continues in this eloquent manner, rare in the modern day pop song “Stone cold reflections of unruly minds” he sings in a tale of urban decadence, with surreal observations: “In a catsuit kamikaze, a bulimic soap star crashed the party”. His poetic tongue is often at its sharpest with lines of dry Mancunian wit such as: “If you’d paid more attention during sex education, you would not have stretch marks the length of Piccadilly station”. Arguably in his moments of charm are his words most inspiring: “She said ‘you can’t see me without my make up on’ I thought you’d never looked better”. The surging track Shadow Kisses stirs up further intrigue with its enigmatic chorus hook: “In Death, Love and Squalor the sordid details were removed, straight from the heart of a suicide girl”.
Mallins’ vocals have that Neil Young trick of seeming fragile yet actually being possessed of angelic strength consistently delivering lyrics that are equal parts romantic, down to earth and abstract, with magnificent lines at every turn. It comes as no surprise that Mallins wrote the majority of his lyrics whilst passing time working in a Manchester book store and it appears that the city has found another articulate idol. Part Bowie and Lennon in its character, Mutineers possess a frontman whose extraordinary voice is undeniably, unmistakably his own.
The big songs come thick and fast, combining exquisite story telling with killer hooks, huge choruses and a stunning mastery of melody. Reed’s simple yet epic guitars chime from the heart carried along by Gronow and Mitchell’s tightly fused, pounding rhythms. In its later tender moments Friends, Lovers, Rivals is achingly beautiful, often cinematic in scope. Mallins’ glorious self reflection is set against subtle, heavenly synths and serene backing vocals showing a band totally at ease, giving their songs the space to breathe.
Whilst many of our new hopes look to 1980’s electro acts for inspiration, Mutineers refreshingly have more in common with artists such as Aztec Camera, The Cure, Roxy Music and The Lotus Eaters, finding their own path through the musical landscape with a sound that’s current, unique and ultimately timeless.
They’ve served their time as a best kept secret, and the secret is about to be let out. Once you’re initiated, The Mutineers will have you believing that you have known and loved their songs for all of your life.
http://www.myspace.com/mutineersofficial