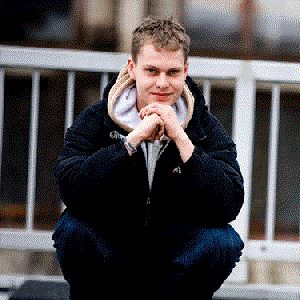 About MC MESSIAH
I may say, that it is him. Although I can regard him as myself. Maybe in him you can find something familiar to your inner-self. It’s also possible that you feed him with ideas or you have nothing to compare him with... However, it’s one and the same MC Messiah. His religion is individualism and his mission — originality. And no one is about to tousle the clouds with his almighty forefinger, while dictating eternal verities. Maybe those verities hide in the small detail, which has been skipped by the objective–lens? Or maybe it’s inside the objective–lens itself, which draws the rubbernecks from its two sides only — pose or be watched posing... Try to see the whole from a different perspective, keeping your heads immersed in the cocktail of futurism, distorted realism, daily ambitions and dirty abstractions... || The greatest winnings of mine, boasting of which could sound swaggering, but concealing them would be too much of modesty are: the Artist of the Year award in the Lithuanian Hip–hop Awards ’05, the Best Hip–hop Artist nomination in the Lithuanian Alternative Awards ‘05, the Discovery of the Battle award in the First Lithuanian MC Battle Online. || MC Messiah, as the rap artist, appeared as the consequence of the enthusiasm of mine. After experimenting with home records for some time, he started his career on the stage forming the live band (beat box + guitar + female vocal + emceeing) and later, when some more skills were gained, he kept on with more mature solo projects. Right now MC Messiah belongs to the co–operation of urban music artists IAL , he is performing in the intelligent rap project Sfera and he belongs to the biggest Lithuanian drum’n’bass promo crew Metro Promo, keeps recording tracks and shows up as an d’n’b MC with DJ Red 1, performs with and appears in the tracks of live d’n’b group SheeZzanova. Moreover, MC Messiah rounded up a mad live band under the name of liVe goes on! It is consisted of two electric guitars, bass guitar, trombone, saxophone, trumpet, drums, 2 deejays, 2 beat makers, personal sound engineer, 2 back vocals, a female singer and MC Messiah himself. He already has made more than 70 concerts all around Lithuania and the number is quickly growing. MC Messiah has made his appearances in the leading Lithuanian hip–hop radio shows such as Gatves Lyga and Bjaurus Bytai, he has also done a musical–video project with CAC TV (Contemporary Arts Center Television). There are already 4 LP’s released with guest appearances by MC Messiah, you can find his solo track and a featuring in the best Lithuanian hip–hop compilation „Ultimatumas 3“, the forth compilation is coming to stores soon, and there will be a solo and even two featurings in the double cd, Metro Promo drum’n’bass’ish LP is about to get released with a few MC Messiah appearances and yet there is more to come. || Like if it wasn’t enough, the fresh eccentric and interactive solo album „Antimaterija“ is out now. The main idea of the album is to show the variety of hip–hop, variety of rapping styles, even variety of musical genres. But the most important thing is to show the variety of themes explored, so that a listener would gather different ideas and emotions, and structure them to one fully complete world model with its own reality system. And then compare it with the present environment. That is the main purpose of my art. And that is the way to fully realize what I want to express. If you prefer not to bother — it will still have some entertaining sounding and this is the point where the performer can’t interfere. || Future Jazz... Abstract hip–hop... ____________ <-- name that genre! No genres. No clichés. No kitsch. Hip–hop IS art.