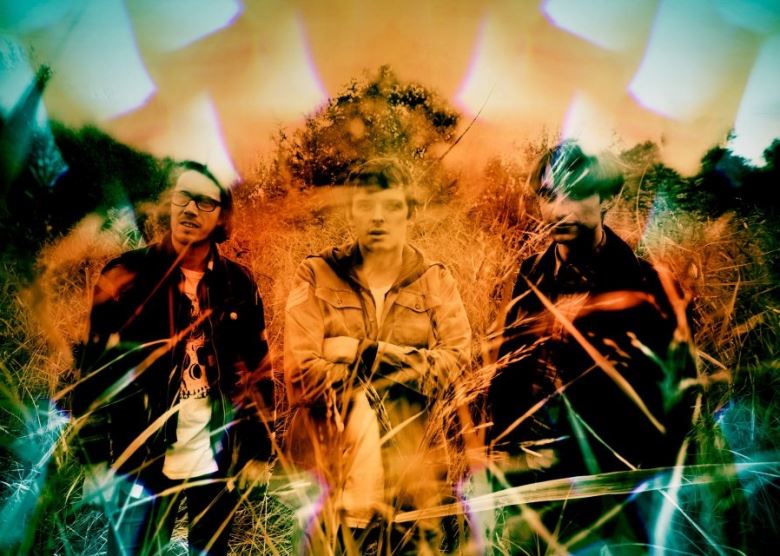 There are two bands named Mazes.
(1) Mazes (comprising of Jack Cooper on vocals and guitar, Neil Robinson on drums, Jarin Tabata on guitars and Conan Roberts on bass) formed in early 2009 in Manchester and began their life touring with Pens and Wavves before going on to play shows and tour with bands such as Deerhunter, Thee Oh Sees, Sic Alps, Box Elders, Dum Dum Girls and Crocodiles. Their belief in recording live and very quickly to tape has meant that they already have a significant back catalogue, releasing their first two singles (the second a split with Spectrals) on Brighton’s Sex is Disgusting and a third on Suffering Jukebox to critical acclaim from blogs and the wider press. Jack Cooper states that they ‘don’t work on anything too much due to circumstance and a quest for spontaneity.’ This approach is most exemplified by the mix tape that Mazes produced for Italian Beach Babes, which, in the grand tradition of Sebadohs 'The Freed Weed' and the series of Fucked Up mix tapes, contained 30 tracks of sketched out ideas, acoustic versions, alternative takes and samples. Mazes are a band that couldn’t be accused of overthinking anything, instead relying on a sharp instinct for a pop hook that had a critic comparing them earnestly to ‘the holy heights of The Clean, The Vaselines and Television Personalities’, whilst Marc Riley, on their recent BBC 6 music session called them a ‘ sort of really garagey Kinks.’
The band themselves reference a range of late 80’s and early 90’s bands such as Guided by Voices and Eric’s Trip, and Mazes’ recorded output so far has shared a similar lo-fi aesthetic with both acts, whilst GBV’s belief in the 30 second song and Eric’s Trip’s ability to put a honeyed pop melody over thick distortion are influences. These acts, however, form just a small part of a vast collection of artists that feed Mazes’ huge appetite for music, evidenced by the IBB mix tape for which they covered bands as diverse as The Beach Boys, Van Halen and Ean Eraser, an obscure (possibly Ukranian) melodic punk band. This mix tape also saw the band manipulate and exploit the limitations of recording to tape, as acts such as Neutral Milk Hotel have done before them, at times using the four-track as another instrument or effect. This is demonstrated on ‘This Fucking Thing’ where the natural distortion of the tape is used to enhance the instrumental’s mystical feel, whilst on recent songs, such as ‘Go-betweens’ Mazes have reigned in and harnessed this natural fuzz to create a warm glow and intimacy that couldn’t be recreated digitally. It is this heady mix of classic song-craft combined with a willingness to experiment and take risks that makes Mazes such an exciting band, just as likely to record a beautifully controlled three minute radio song (‘Cenetaph) as a thirty second thrash punk song (the wonderfully named ‘Painting of Tupac Shakur’.)
Mazes have demonstrated a real appreciation of the D.I.Y ethos and sense of community amongst their peers that so many of the acts they admire embraced. Jack runs the aforementioned Suffering Jukebox whilst Conan, also a member of Graffiti Island, runs Italian Beach Babes. Putting out limited 7”s and 12”s of music they love, these labels are very much part of what makes the UK scene so vibrant at the moment and there is a real sense of camaraderie between acts such as Pens, Cold Pumas, Mazes and Male Bonding that this has fostered. Mazes join a growing list of artists that have released on Fatcat who have been actively involved in a D.I.Y scene which includes artists as respected and influential as Animal Collective, Black Dice and No Age. With such excitement growing about the band it seems they are in good company.
(2) The other band, Mazes released their selftitled album in march 2009, and Mazes Blazes in october 2012. Mazes is made up of three multi-instrumentalists, Edward & Caroline from The 1900s and their peculiar friend Charles d’Autremont, aided & abetted by bassist Tom Smith (ex-Office and Old Fake), and drummer Pat Cavanaugh.
Mazes songs are sometimes written and recorded in one long night and sometimes gather dust on 4-track cassettes for years before being resurrected and transformed, but always come out with a palpable feeling of freshness that can only come from people genuinely having a good time making music. Recorded themselves in various studios, bedrooms and basements over the past few years – this "mid-fi" record follows a "moment of creation" philosophy where most of the songs are written and recorded on the spot, with beer.