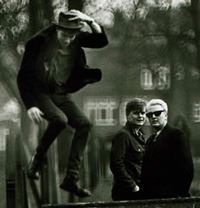 From www.daintees.com...
Martin Stephenson is a supremely gifted singer, songwriter, musician and performer, whose career in music stretches back now almost twenty years. Born in County Durham, in the North-East of England, on the 27th. July 1961, Martin was initially fired up to play in a band when the Punk Rock phenomenon went overground in the late 1970's. Then, as now, however, Martin's free spirit incorporated a love for an eclectic range of musical styles, from Rockabilly, show tunes, through to straight ahead rock and full-tilt Punk.
He convened The Daintees in the early 80's, the name deliberately chosen as a response to the humourlessness and angst of much of the music of the time. The Daintees became one of the first bands to sign with the Newcastle-upon-Tyne based independent label, Kitchenware, and their debut single, "Roll On Summertime" was a sparkling, cheerful item that announced the arrival of a considerable new talent.

After Kitchenware packed Martin to London Records, he released the marvellous debut album, "Boat To Bolivia" (1985) with The Daintees, under the Production auspices of future Pixies/Bunnymen/James sound man Gil Norton. The album positively burst with excellent, rootsy pop songs, boasting a veritable rainbow of styles, sung and played with a youthful enthusiasm and warmth that paradoxically, perhaps, displayed a mature, unique Songwriting voice. Songs such as the bittersweet "Crocodile Cryer", the alcoholic's lament "Little Red Bottle", the emphatic "Running Waters" and the haunting ballad "Rain" further underscored the impression that "Roll On Summertime" had made. Lengthy bouts of touring saw Stephenson and the band taking his music to the people, and they loved it, carving an awesome reputation as a live act.
Subsequent albums, "Gladsome, Humour, and Blue" (1987), "Salutation Road" (1989), "The Boy's Heart" (1992) however, failed to distil the essence of Stephenson's muse quite so effectively. London's quest for a hit single ran converse to Stephenson's desire to make a purer, more heartfelt music, although all said albums had their moments.
Martin's instinct to kick against the label's constraints saw him undertake tours of highland Folk clubs and tiny bars.
Martin left London in 1993, and also severed his ties with the Kitchenware management team. He signed to the West London based indie Demon Records, for whom he made three, highly acclaimed albums "Yogi in My House", "Sweet Misdemeanour" (both 1995) and "Beyond the Leap, Beyond The Law" (1997).
Following the sale of Demon in 1998, Martin moved on, releasing "When It's Gone, It's Gone" on the Tyneside-based independent, "Get Rhythm", and during April 1999, released his eponymous album for the Floating World label. The album consists of re-recordings of some of his finest songs, from all stages of his career, free from commercial constraints of the mainstream music industry. Now relocated in the Highlands of Scotland, Martin remains a gifted, but self-effacing, and modest individual. He ploughs his own furrow, still refining his already prodigious musical skills. "The Lilac Tree", a more acoustic-based project that displays further evidence of a maturing talent in its prime.