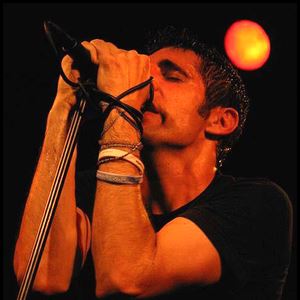 Jonah Matranga is a singer, songwriter and guitarist who has released a variety of solo material under both his own name and onelinedrawing, and has previously been part of the bands Far, New End Original (an anagram of “onelinedrawing”) and Gratitude.
Jonah Matranga grew up in and around Boston, Massachusetts. He left in 1987 to attend Pitzer College in Claremont, California, where he majored in English. After College, Jonah moved to Sacramento, where he lived for 8 years. Jonah married in April 1994, and his daughter was born that August. He divorced two years later. In 1999, he moved to the Bay Area to remain close to his daughter. He currently lives in San Francisco.
In 1991, Jonah formed Far with Shaun Lopez, Chris Robyn and Malcolm Keefe. Keefe left in 1993 and was replaced by John Gutenberger. Far made four albums before disbanding in December 1998. After Far’s breakup, Jonah began to perform under the name onelinedrawing, which had been the name of a cassette he had released on Kevin Seconds’s Pop Rockit Records.
Much of his solo material has also been self-published, though often subsequently distributed through labels such as Crank! and Corrupted Image. However, his two full-length onelinedrawing albums, Visitor (2002) and The Volunteers (2004) were released by Jade Tree Records. Matranga retired the onelinedrawing moniker in 2004, and he now intends to release all future solo releases under his name. In December 2004, Jonah began offering custom-made recordings of songs by himself or others through his website, in order to offer a one-of-a-kind musical artpiece. Information about this and his many other ideas can be found on Matranga’s website. Matranga can also be contacted there personally.
In 2005, Matranga put out “Sketchy EP #3″, as well as a DVD, “There’s a Lot in Here”, which featured acoustic and electric live performances, as well as videos made with his close friend Darren Doane. In addition, he re-released two early solo releases on CD (the recordings initally came out on cassette). Many of Matranga’s solo and band releases are available on a sliding scale (”pay what you can”) from Matranga’s personally-maintained online store.
As of this writing, “There’s a Lot in Here” is being re-released as a 2-Disc (CD+DVD) Set through Equal Vision Records.
Jonah has contributed backup vocals to Thursday’s album War All The Time, on the track “Steps Ascending”, and with Deftones has contributed to a cover of “No Ordinary Love”, a Sade song. He has also contributed to previous Matt Nathanson and Lupe Fiasco releases, as well as two songs by Fort Minor, the side project of Linkin Park’s Mike Shinoda. In 2005, he co-wrote Taproot’s “Calling”, the first single from their album Blue-Sky Research.
In 2006 Jonah also released a joint ep with Frank Turner,former front man of Million Dead, containing 2 tracks "A New England" and "All i want"
“In numbers: 15 years, 4 band names, 6-full lengths, 6 EPs, a few splits, several comps, 100+ songs, 1000+ shows. Sinead O’Connor meets Cheap Trick. Zeppelin are the rulers. Neil Young is a huge hero for the chances he’s taken. Anyone that takes chances, be it Prince, PE, Fugazi, Sinead, Miles, Dylan… I love that, that is what inspires me. I am a mess of art-school ideals and populist sentiment, and I love that paradox. I’m okay with (and happy about) being considered influential in the context of post-hardcore, anti-macho rock, but I take no responsibility for McEmo as it generally manifests today. I deplore the commodification of sincerity, and big budgets to make people look/sound ‘authentic’. If I go there, it’s real, not a clever put-on. Bands have been a tough one. Far was a good growing up. New End and Gratitude were nightmares in many ways, though I’m really proud of the songs and the shows. It taught me finally that while I love rock, I can’t do it in a traditional, ‘band’ way. I’m not good at it, and I don’t like it. Nothing special about playing guitar, it’s about what you put into it. I still love singing, and am overwhelmed regularly listening to music. I am an utter rock geek, an art idealist, and I absolutely believe in the transformative, transcendent power of rocking the fuck out. Rocking the fuck out is in no way tied to volume or mood, it’s just letting go.”
- Jonah, Jan2006, San Francisco.
Solo Releases:
Jonah Sonz Matranga - Songs I Hope My Mom Will Like (1994) (cassette)
Jonah Matranga - Jonah’s One-Line Drawing (1998) (cassette)
onelinedrawing - Sketchy EP #1 (1999)
onelinedrawing - Sketchy EP #2 (2000)
onelinedrawing/Sense Field - Split EP (2000)
onelinedrawing - Always New Jan-Jun 2000 (online 2000, CD 2001)
onelinedrawing - Always New Jul-Dec 2000 (online 2000, CD 2002)
onelinedrawing - Always New 2001 (2001) (online)
onelinedrawing/Rival Schools - Rival Schools United by Onelinedrawing
(2001)
onelinedrawing - Visitor (2002 Jade Tree)
onelinedrawing - The Volunteers (2004 Jade Tree)
Jonah Matranga - There’s A Lot In Here DVD (2005)
Jonah Matranga - Sketchy EP #3 (2005)
Jonah Matranga - There’s A Lot In Here CD+DVD (2006 Equal Vision)
Jonah Matranga and Frank Turner - The Jonah Matranga and Frank Turner EP. (2006)
Jonah Matranga - The Three Sketchys (1999-2005) (2006)
Band Releases:
Far - Sweat A River, Live No Lies (1991) (cassette)
Far - Listening Game (1992)
Far - Quick EP (1994)
Far - Tin Cans With Strings To You (1996 Epic/Immortal)
Far - Soon EP (1997 Epic/Immortal)
Far - Water & Solutions (1998 Epic/Immortal)
New End Original - Lukewarm single (2001 Jade Tree)
New End Original - Thriller (2001 Jade Tree)
Gratitude - Gratitude (2005 Atlantic)