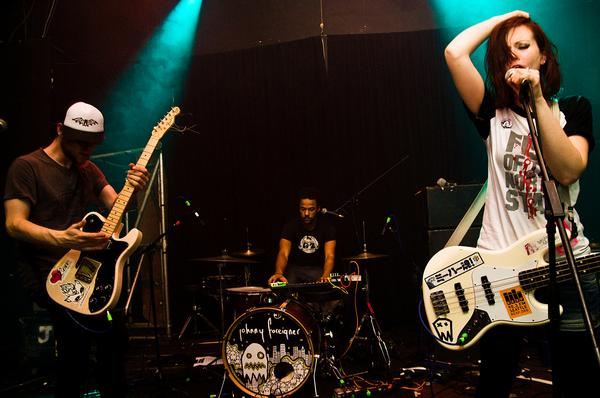 Johnny Foreigner is an indie rock band from Digbeth in Birmingham, England. As of 2012, the band consists of guitarists Alexei Berrow and Lewes Herriot, drummer Junior Elvis Washington Laidley and bassist Kelly Southern.
Before forming the band in December 2005, Alexei played in an act called Panda Love Unit. Kelly, who joined Johnny Foreigner some time later, had previously played with Twist and Baxxter, playing drums for the latter.
Panda Love Unit formed in Winter 2001 and split in Summer 2004. The band featured Alexei alongside Alan Wilson, Susan Ennis & Liz Hamblin. They released a 4 track EP, “fireworks to stick us…together” on Awkward Records.While Liz Hamblin was travelling in 2003, Kelly Southern replaced her on bass for a series of gigs where Panda Love Unit called themselves Superhangon2.
Kelly had previously replaced Twist’s bassist Lisa Lavery in 2001 after the release of Twist’s debut album, Magenta. The band featured vocalist Emma Fox, Vanessa White and Leanne Taylor. Upon her joining the band Emma said of Kelly, “She looks like, smells like, plays like and swears like us…she’s well in!” Soon after Twist released the EP “14,” and then signed a six-song deal with Bug/Library Publishing. Prior to joining Twist, Kelly played drums in another act called Baxxter.
The “prototype” Johnny Foreigner formed as “a country band with pretensions” (according to Alexei) with Kelly’s predecessor Daniel Boyle on bass in December 2005. Boyle left Johnny Foreigner to attend university, and now plays in London-based band Gentle Friendly. Prior to his leaving the original Johnny Foreigner line-up released We Left You Sleeping And Gone Now, a self-produced, 11-track album recorded in 2005 in a hand-made edition of 40 copies. Liz [possibly Hamblin], Rob [surname unknown] and Seb [Lenton] (of Distophia) are also credited on the album.
Johnny Foreigner’s first single, “Sometimes In The Bullring” b/w “Camp Kelly Calm”, was released by Laundrette Recording Company in October 2006; 300 copies were made and sold out in two months. A second single, released May 21, 2007, was a split with fellow Birmingham act Sunset Cinema Club. Johnny Foreigner’s side of the vinyl featured the track “Yes! You Talk Too Fast” as well as a cover of Sunset Cinema Club’s “Ninki vs Dingle.” For its side, Sunset Cinema Club covered Johnny Foreigner’s “Candles”. This release, also issued by Laundrette Recording Company, was packaged with 3D-artwork and 3D-glasses. In addition to the commercially available releases, Johnny Foreigner packaged up 15 demos in July 2007 and made them available for free download under the title I Like You Mostly Late At Never.
Johnny Foreigner entered Channel 4’s battle of the bands competition “Road to V” in early 2007 to win the chance to open V Festival 2007 but lost in the final 14 to The Brightlights and Rosalita.
After signing to Best Before Records in Autumn 2007, the band issued the EP Arcs Across The City November 26. The EP was rated 10/10 by popular online music magazine Drowned In Sound. Best Before released Johnny Foreigner’s third single, “Our Bipolar Friends” b/w “The Houseparty Scene Is Killing You” on March 10 2008, which nearly sold out of its initial issue of 1,000 copies before it was even released.
The fourth single by the band, “Eyes Wide Terrified” b/w “I Heard, He Ties Up Cats” and “What Burlesque Won’t Stand”, was released 18th May 2008. This was followed by “Salt, Peppa and Spinderella”, the video for which was composed of about 70,000 still images. The clip was banned from a host of TV channels due to fears that it may trigger seizures. A 6th single, and the final from Waited Up ‘Til It Was Light, was the double A-side of “DJ’s Get Doubts/Lea Room”, released January 12, 2009. This was a digital-only issue.
On June 2, 2008, Johnny Foreigner released its debut album, Waited Up ‘Til It Was Light, on Best Before Records (distributed in America through Nettwerk). The set was recorded in Hoboken, New Jersey with Grammy award-nominated producer Machine, whose previous credits include work with notable contemporary hard rock acts such as Lamb of God as well as King Crimson. The artwork for the long-player, as with Arcs Across The City, was designed by Lewes Herriot, who has done all the band’s artwork to date. The British release featured seven interchangable covers, each depicting a Birmingham landmark. The song “Cranes and Cranes and Cranes and Cranes” references (but does not sample, as is widely written) the theme to the ’60s American sitcom, I Dream of Jeannie. A track by track guide to the LP was written for Drowned in Sound.
In March 2009 Johnny Foreigner will record their second album in Brooklyn, New York with Alex Newport, best known for producing music for Death Cab For Cutie, Rival Schools & At The Drive-In. This will be done in the 3 weeks between their European tour supporting Sky Larkin and their UK tour supporting Hundred Reasons. Just prior to their tour with Sky Larkin, the band released demos of two songs as free downloads, with Ghost The Festivals and Ohai, Sentinels being released as JohnnyForeginerIsAces. This is available to purchase on the tour, and features 3 other tracks - a previously unheard session version of Suicide Pact, Yeh?, a live version of Cranes and Cranes and Cranes and Cranes taken from New Slang, Kingston in winter 2008, and a lounge version of Sofacore from Sountrack Studios, New York City.