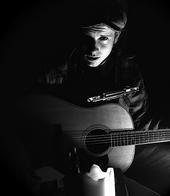 There are two artist by this name:
1) Born in Detroit, Michigan, Joe Nolan's sound has always combined the soul spirit of the Motor City with a poet's ear for the natural rhythms and rhymes he reveals in his intricate, intimate lyrics. Read more below.
2) Joe Nolan is an Edmonton, Alberta based singer songwriter. In December of 2010, Joe Nolan traveled to Nashville, Tennessee to record his third album “Goodbye Cinderella” with award-winning producer, Colin Linden. Read more below.
1) Joe began playing the saxophone at the age of nine. By the time he turned sixteen, he was playing in a high school rock band and writing original songs. During the next few years Joe released two projects straight to cassette. The debut collection - 3 A.M. Mainstreet Time - won Joe rave reviews as a poet/storyteller, and was a welcome addition to college radio play lists in the Midwest. Subsequently, Joe was asked to record a 7” record for Aardvark Records. The recording featured early, solo recordings of “Brown-Eyed Boy” and “Shipwreck Song”. Both songs subsequently appeared on Joe's well-received debut CD, Plain Jane.
In 1992, Nolan moved to Nashville, TN where he was quickly signed to a publishing agreement with Black and White Music (BMI), and began performing and recording with fellow musician Pat Flynn (New Grass Revival). Joe and Pat had been co-conspirators on several demo sessions for the hundreds of songs Joe wrote during this time. The two of them envisioned an all-acoustic recording that tipped its hat to the various sounds of the '60's folk revival. Plain Jane – the CD they co-produced – avoided retro cliches and reverent homages alike. Instead, the duo crafted a decidedly contemporary collection of songs that won breathless praise, and put Joe on the map as an important young songwriter.
Nolan was named "One to Watch" by the internationally syndicated radio program Acoustic Cafe in March 2002. "One to Watch" sponsor, The USA Songwriting Competition, invited Joe to showcase at the Atlantis Music Conference (Atlanta, GA), at Song Circle (Mamboo, Los Angeles, CA) and The Nashville New Music Conference . Plain Jane was recognized in the "DIY Top 12 Picks" in Performing Songwriter and Joe was recognized in an Artist's Spotlight by the International Acoustic Music Awards.
Joe established a presence on the world wide web in 1999 and had several top 40 songs on the innovative Mp3.com. "San Francisco Girl" reached No. 5, and has been heard in a feature on Late Night with David Letterman. He was a Grand Prize Winner in MP3.com's Summer of Love contest with Plain Jane being awarded honors by a panel of industry professionals.
His follow-up – King - demonstrated a remarkable evolution, moving from the gorgeous, acoustic atmospheres of Plain Jane, to a raw, intense collection of electric guitar-based songs that highlighted Joe's connections to rock-a-billy, rhythm and blues, and jazz. Lyrically, King found Joe transforming the story-song stylings of his debut in favor of a more impressionistic approach. The song "Get Behind Me Satan" was featured in the independent film Masselin House in 2003. King also distinguished itself as an Internet-only release, long before such strategies had become commonplace. This solidified Joe's reputation as an artist who has always been on the cutting edge of the digital music revolution. The current incarnation of joenolan.com boasts over 500 downloads and over 10,000 visitors, from 42 countries, per month.
Joe's latest release - Blue Turns Black - is his most personal and mature collection of songs to date. Running the gamut from solo-acoustic ballads to horn-infused soul to pop and rock, Blue' again flouts contemporary trends - including New-Soul cliches – to create nothing less than a Rosetta Stone of American Music. The song “The First to Know” has already been featured in the independent film For Women Only, which has played at the Asheville, North Carolina Film Festival as well as the da Vinci Film Festival.
In 2004, Joe signed a publishing administration deal with Erik Steigen at 2850 Music, Santa Monica, California.
In addition to his music, Joe is a published poet and an award winning actor. He is well-known for his writing on visual art and music, and he pens the popular blog, Insomnia.
2) The album was produced by award-winning producer Colin Linden and featured some of Nashville’s most storied players including Spooner Oldham (Bob Dylan, Aretha Franklin and Neil Young) on keyboards, Charlie McCoy (Bob Dylan, Elvis, Simon & Garfunkel) on harmonica, Dave Roe (Johnny Cash, John Mellencamp) on acoustic bass, Chris Donahue (Emmylou Harris, Robert Plant) on electric bass, Bryan Owings (Emmylou Harris, Tony Joe White, Delbert McClinton) on drums, along with producer Linden (Bruce Cockburn, Lucinda Williams) on electric guitars and vocals. The record was brilliantly recorded by John Whynot (Blue Rodeo, Loreena McKennitt) who also contributed keyboards on a few songs. The recording features 10 new Joe Nolan compositions and shows a quantum leap in maturity and confidence. Joe’s beautiful combination of sweet, sad lyrics and haunting vocals come from a deep well that shows a young man’s heart and an old man’s soul. Protest songs, love songs, songs with questions and songs with answers created a collection that has the listener wanting more. His live performances are mesmerizing and the audience connects to Joe’s soft, honest and heart-felt delivery. Praise for “Goodbye Cinderella” came from many directions. The reviews are stellar, the recording was quickly picked up for distribution in Europe with a commitment for Joe to embark on his first European tour in the spring of 2012, and more recently, Joe was nominated in the Best New/Emerging Artist category at the Canadian Folk Music Awards. Joe has been performing non-stop over the past few years building an ever growing fan base. He has been sharing stages with established artists that include Todd Snider, Colin Linden, Sam Baker, Gurf Morlix, Dave Alvin and the Guilty Women, Mathew Barber, Oh Susanna and the legendary Peter Asher.
Joe is a previous winner of the CBC Radio Galaxy Rising Star Award.
www.joenolansongs.com