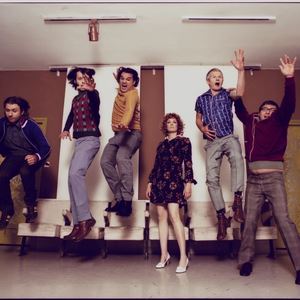 There are ten bands/artists with this name:
1) Jinx, a Croatian band
2) JiNX, a Belgian band
3) JINX, a British DJ duo
4) Jinx, a Swedish gabber-artist
5) Jinx, an Amsterdambased heavy metal band
6) Jinx, a Finnish rap artist
7) The Jinx, a Swedish streetpunk\oi band
8) Jinx, an American indie rock artist
9) Jinx, a Finnish DJ duo
10) Jinx, a German skarock punk band
11) Jinx, a Punjabi group with a fusion of urban and bhangra music
12) Jinx, a British pop duo (spin-off from the kid's TV show of the same name)
13) Jinx, a Dutch blunge (grunge/blues) band
14) Jinx, a American rap artist
15) Jinx, a Thai alternative rock band
16) Jinx, a German rap artist
1) Jinx(Croatian) www.myspace.com/jinxhr - Their first concert was performed under the name 'High Jinx', with Yaya, Coco Mosquito, Mr. Goody, Goony and Kiky the Kid in 1994, in the city’s well established club Saloon. Since all fans who attended their first gigs referred to them solely as Jinx, the band officially accepts the shorter version of their name.
1995 – Jinx release their debut album “Sextasy” in English.
1996 – Berko and Samir join the band.
1997 – Jinx sign their first record deal with Aquarius Records and release their second album “Second Hand”.
1998 – Jinx receive a prestigious award by Radio France International in Bucharest for best new artist. The Cardigans went on to win this same award in 1999.
1999 – Jinx release their third album “Pompei – Ljetna Ploča Katastrofe”.
2001 – Their fourth album “Avantura Počinje” (first planned to be named "Paranormalno!") is released.
2002 – Jinx break up.
2006 – In total secrecy Jinx regroup and start working on a new album. A few months later, Samir quits the band due to other commitments and Adam Matijasevic replaces him.
2007 – Jinx sign with Dallas Records and release their comeback album “Na Zapadu” (“In the West”).

Band members are:
Yaya (vocal);
Coco Mosquito (guitar, songwriter, arranger);
Mr.Goody (keyboards);
Berko (drums);
Adam Matijasevic (bass guitar);
Igor Pavlica (trumpet);
1997-2001
Kadri Bassic (bass guitar);
Jordes (saxophone);
Other releases:
Sextazsy (home made, 1995.)
Pompei-ljetna ploča katastrofe (Aquarius Records, 1999.)
Sextazsy (special release) (Aquarius Records, 2000.)
Avantura počinje (Aquarius Records, 2001.)
Retro/Best of Jinx(Aquarius Records, 2002.)
Na zapadu (Dallas Records, 2007.)
2) JiNX are a Belgian band that started in 2003. For more updated information check www.jinxmusic.be (in Dutch)
3) JINX, duo Dubz and Jogi, hail from Rochdale, Manchester and have been on the DJ circuit for over 5 years. Their aim - to bring a fresh, new & diverse sound to the Asian music scene. The sound - they describe as British Asian music, fused with urban and experimental made for all ages and for everyone to enjoy. The end product - their debut album Culture Shock. Culture Shock, released on the independent Asian Flavaz label, has a little something for everyone with bhangra bangers, R&B anthems, Bollywood vibes and Pakistani Indian Pop, whilst at the same time featuring some amazing vocalists including Sohail Salamat and Bila Sahota. The range on the album is a result of their various musical influences which range from Oasis to Mary J Blige and Nusrat Fateh Ali Khan.
The first track to be taken off the album, Akhiyan Udeek Diyan, is jinx’s version of the famous original by Nusrat Fateh Ali Khan track and has already been receiving great feedback.
The current videos which are being heavily rotated on the Asian channels are Akhiyan and the final track on their album, Rang to which Don D lends his vocals and features a heavy bass line and infectious drum beats, not to mention a melodious musical rift throughout.
Other tracks on the album include the contemporary Show You - an R&B number with an Arabic influence, Nachley - a more traditional number with a modern interpretation, Mitrade - simply made to make you want to dance, Shisha Da Lenga (which means Mirrored Dress) - which features bold Punjabi lyrics, Yaad - a more emotional track and Gal Sun - a soulful song of which the lyrics and melody were co-written by Jinx and looks likely to be the next single with a video being shot soon.
4) Jinx is a Swedish gabber-artist
5) Jinx is also is an Amsterdam-based heavy metal band. www.realheavymetal.com
6) Jinx is a rather unknown Finnish rap artist.
7) The Jinx is a popular Swedish nationalist streetpunk\oi band with former members of Midgards Soner.
8) Jinx is an indie rock artist from various places in the United States.
9) Jinx is a Finnish duo from the city of Jyväskylä and its members are called Cazeus and CyberCuicca. They make different kinds of electronic music with a melancholic touch.
10) Jinx is a band "somewhere in between Punk, Rock, Ska and Crossover" and was founded 1999 in Hannover/Germany. More information on http://www.jinx-band.com (German).