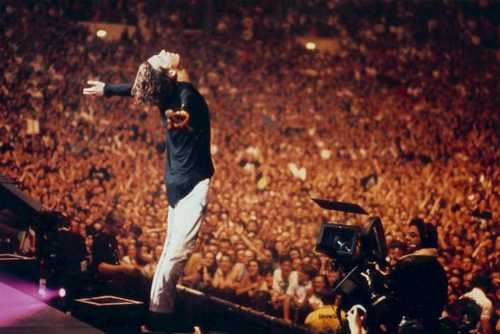 INXS (pronounced "In Excess") was a rock group formed in Perth, Australia. The band formed in 1977 under the name The Farris Brothers. Original members included Michael Hutchence (lead vocals), Andrew Farriss (guitar and keyboards), Tim Farriss (lead guitar), Jon Farriss (drums), Garry Beers (bass), and Kirk Pengilly (saxophone and guitar). The band changed their name to INXS just prior to the release of their self-titled début album in 1980.
The band's second album, Underneath the Colours released in Australia in 1981, included the minor hit with "Stay Young." The success of this album helped the band gain momentum and notoriety for the world-wide release of their third album, Shabooh Shoobah in 1982. The single "The One Thing" from this album brought them their first Top-30 hit in America. Touring in 1983 in support of fellow Aussies Men At Work helped bring them to American attention.
The Swing (album #4) was released in 1984 and "Original Sin" became their first #1 single and an international hit. It was followed by Listen Like Thieves in 1986; an album which brought the band's singer Michael Hutchence into the spotlight as a sex symbol for the MTV generation. The single, "What You Need", became a Top-Five Billboard hit and the band enjoyed ever increasing U.S. success.

INXS reached their worldwide peak of popularity in 1987 with the release of their 6th album, Kick. It garnered four Top-10 US singles. Hits like; "New Sensation", "Never Tear Us Apart", "Devil Inside", and the #1 "Need You Tonight" led to the success of international tour dates throughout 1987 and 1988.
In 1989, Hutchence released a solo effort with Max Q. The reviews were fair but the album was not widely successful. The other band members also worked on side projects, but all soon returned to the studio to record their follow-up album titled X.
X was released in 1990 and critics and fans considered it a weak follow-up to the wildly successful Kick. Nevertheless, X did score two Top-10 US hits with "Suicide Blonde" and "Disappear" and was a Top-5 hit album internationally.
On July 13, 1991, INXS performed in London's Wembley Stadium to a sold out crowd of 72,000 as part of the "Summer XS" tour. During this show, INXS produced a video to come out in conjunction with their album Live Baby Live. [Note: pronounciation is Live (as in: live your life) Baby Live (as in: Live concert)]
Welcome to Wherever You Are, was an experimental album released in 1992 using sitars and a 60-piece orchestra. It received critical reviews and went number one in the UK & Sweden and number two in Switzerland, but had difficulty finding an audience in the U.S.
1993's Full Moon, Dirty Hearts received mixed reviews and included a track called "Please (You Got That)" which featured the legendary Ray Charles and title track with The Pretenders Chrissie Hynde. Full Moon, Dirty Hearts was the last record under INXS' contract with Atlantic.
Throughout the 1980s and into the 1990s, Michael Hutchence enjoyed increasing public awareness as an international sex symbol and was linked romantically to supermodel Helena Christensen and recording artist Kylie Minogue. The band remained a major force in Australian popular music, but by the mid-nineties their popularity had waned, especially in the US, where their Greatest Hits compilation failed to reach the Top 100.
In 1997, the group released a comeback album titled Elegantly Wasted, which garnered mixed reviews. Later the same year on November 22, 1997, Michael Hutchence was found dead in a Sydney hotel room. The coroner performing the autopsy ruled his death a suicide but there was also speculation that his death was an accident, the result of autoerotic asphyxiation. This, however, was never proven, as most evidence and the circumstances in Michael's life support the theory of suicide.
After the death of Michael Hutchence, INXS continued, using various different guest vocalists, including Terence Trent D'Arby. Jon Stevens began singing with them in 2000, officially becoming a member in 2002 shortly before quitting the following year. In 2001, INXS was inducted into the Australian Recording Industry Association Hall of Fame.
In recent years INXS returned to the news when they announced a new reality television program titled Rock Star: INXS. The show was a contest, held in 2004 to find a new lead vocalist. On 20 September 2005, after an 11 week competition J.D. Fortune of Oakville, Ontario, Canada was proclaimed the winner. "Pretty Vegas," a song that Fortune wrote as part of the competition, was released as a single on October 4, 2005 and reached #5 on the iTunes Store ranking of top downloaded songs.
J.D. Fortune announced in February 2009 that he was sacked from the band in 2008 and would record a solo album. However, after a number of appearances as the band's singer in early 2010, Pengilly and Fortune confirmed in a radio interview that Fortune had returned as the band's permanent lead singer.
In September 2011, Fortune and INXS has officially announced that they amicably parted ways. The new singer is Ciaran Gribbin, who previously worked with Paul McCartney, Snow Patrol, Paul Oakenfold and Groove Armada and was nominated for a Grammy award for co-writing "Celebration" for Madonna.
In total, INXS has received three Grammy nominations over their 30 year career.
2012