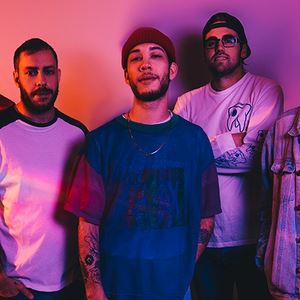 Opera (n) Plural of opus, meaning work of art
Oblivia (n) A passive state of forgetfulness
A collection of wonderful moments that tend to drift away from our memory: at its best, this is what life is.
And for Hellions, their third album Opera Oblivia is a glorious celebration and forensic examination of everything that makes being alive worthwhile – from high to low, they say, the nearest thing any of us have to a shortcut to happiness is the necessity of being true to oneself.
“We would love for Opera Oblivia to be an escape for its listeners,” suggests guitarist Matthew Gravolin, “but more than that, we want it to commiserate with people through our common unpleasantries and overwhelming hardships, and also celebrate alongside our inevitable victory. We want people to allow it to befriend them and remain with them long after its sounds fade out.”
Structured like a theatrical presentation, Opera Oblivia is the Sydney quintet’s defining statement to date, a brave masterpiece that lays bare the colossal scope of both their ambition and talent. Frontman Dre Faivre, guitarists Gravolin and Josh Campiao, bassist Chris Moretti and drummer Anthony Caruso have, alongside producer Shane Edwards, stretched themselves like never before, taking the flashes of glory that peppered Die Young (2014) and Indian Summer (2015) and expanding them into a fully-formed project that vibrates with energy and joy.
“The title Opera Oblivia came to light a couple of months prior to the album’s recording,” remembers Gravolin. “Not long after the release of Indian Summer we had all agreed that we wanted to begin work on a project of much larger proportions, and we wanted the ensuing record to have a true-ringing feel of operatic grandeur”
“The act-based structure was an epiphany of Anthony’s that came to him towards the end of the recording process,” the guitarist continues. “His mentality was that we should structure the album as a traditional opera, so when it came to deciding upon the track listing, we did so thematically. This gives the record a loose orientation, complication and resolution in the form of Acts, based on the topics discussed in each song.”
The album runs riot with its subject matter, from the existential disillusionment of the thrilling Thresher to Quality Of Life’s self-determinism and the shocking and sad He Without Sin. It’s a collection of songs as concerned with the state of the world outside our heads as the one within, and the musical palette reflects this accordingly.
And that’s due to Opera Oblivia’s list of collaborators, who number producer Shane Edwards, Northlane riffmaster general Jonathon Deiley, Ocean Grove’s Sam Bassal and Duane Hazell of Heroes For Hire. “Anthony and I have been working with Shane for 10 years now, and Chris, Josh and Dre have also each entered the studio with him multiple times before,” says Gravolin. “He has an affinity for pushing us beyond our perceived boundaries and knowing when we’re selling ourselves short with a dead-end section. The biggest difference this time was the way he worked with Dre and I as vocalists. The grand nature of the music called for vocal melody and, recognising this, Shane put heroic effort into galvanising Dre and I out of our comfort zones, truly making for the success of this album that we are so proud to call our own.”
“It would be remiss of me not to mention the heartfelt contributions made to Opera Oblivia by Jon, Duane and Sam. They each, in their own way, helped many of these songs to become what they are today.”
With rock, punk, metal and pop all blended and emboldened by relentless melody, the likes of Bad Way, 24, 25 and Lotus Eater fizz with colour. Where in the past Hellions sometimes struggled to contain their ideas from bursting free, Opera Oblivia represents the band nailing their goal of writing progressive, genre-agnostic music that still hits when it needs to.
These songs are bangers, basically, even if they don’t always make sense.
Just like life.