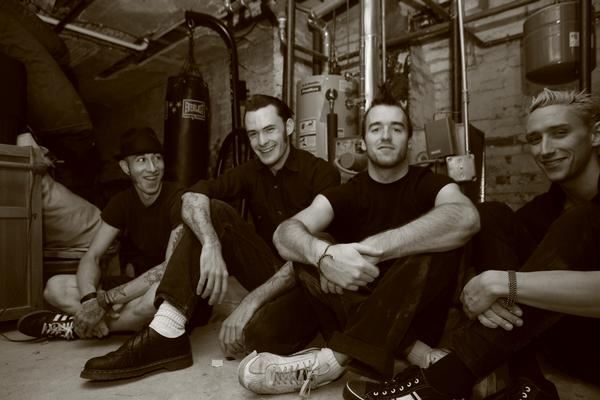 So, the almighty HAVE NOTS have arisen like a phoenix from the ashes of two Boston punk mainstays, STRAY BULLETS and CHICAGO TYPEWRITER (ok, that may be a bit dramatic, but you get the idea)...featuring Jameson Hollis, Steve Patton, and Matt Pruitt from ChiTy, and Jon Cauztik from SB, HAVE NOTS play the "ill ragga punk" that makes the kids dance and occasionally get so excited that they puke on themselves (the kids, not the band...the band pukes on themselves for entirely different reasons...ask Pruitt why he doesn't wear a scarf when it's cold out anymore).
Formed in late 2006 because "fuck, what else are we gonna do?", HAVE NOTS played their first show at a Halloween party on October 28th at the Basement in Jamaica Plain, MA, to critical acclaim (again, that might be pushing it, but the forty or so bejeweled and bedraggled revelers who were still sober enough to stand at midnight seemed to be enjoying themselves immensely), and plan on continuing their onslaught until they have won the hearts and minds of all the oppressed peoples of the world, or until they make enough money to retire to a villa in the south of france, because, let's face it, once you have a villa in the south of france you don't really have to give a flying fuck about the oppressed peoples of the world anymore. And what the hell is a villa, anyway?
Musically, HAVE NOTS draw on a wide variety of genres, including, but not limited to, PUNK, REGGAE, HIP-HOP, COUNTRY, POP, HARDCORE, SKA, FOLK, REGGAE, and PUNK. Oh, and PUNK and REGGAE as well. Lyrically, the songwriting team of Pruitt and Cauztik attack issues like "Man, I am fuckin' WASTED!", "Dude, I don't think my girlfriend loves me anymore.", "What the fuck happened to all my money?", and the old standby "THIS PLACE IS TOTALLY GOING TO SHIT AND NO ONE'S EVEN PAYING ATTENTION! WHAT THE FUCK IS WRONG WITH YOU PEOPLE?!?", with both aplomb and reckless abandon, much to the delight of the great, lonely, downtrodden, shitfaced unwashed, and to the consternation of The Man everywhere.
What does the future hold for HAVE NOTS? Recording (sooner), touring (later), smoking (yes please), drinking (of course), and coming soon a basement, parking lot, VFW, music festival, squat, drunk tank, or club near you. Consider yourselves warned.