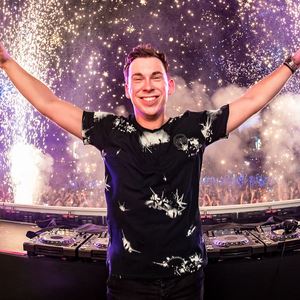 Music maturity came swiftly for the now seasoned-veteran Robbert van de Corput, better known as Hardwell. At the age of 25, the young Dutch titan capped off a 10 year journey when he was crowned World’s No.1 DJ in the 2013 DJ Mag Top 100 DJs Poll cementing his position as the electronic scenes newest superstar DJ and becoming the youngest ever winner of the coveted Top 100 DJs award. In 2014 the Dutch megastar did it again - being crowned World’s #1 DJ in the 2014 edition of DJ Mag’s Top 100 DJs Poll for a second consecutive year. Having already created a legacy that would put most of his counterparts to shame this award-winning DJ, producer, musician, label owner and lover of all things music has not only helped shape the current state of EDM, but has left an everlasting imprint on it.
Label boss of Revealed Recordings and collecting a plethora of Beatport #1’s (no less than 7 consecutive #1’s in 2013 alone), his studio output has never been more prolific or more on point. Records such as his anthemic hit ‘Spaceman’, ‘Three Triangles (Losing My Religion)’, ‘Countdown’, ‘Jumper’, alongside the hard-hitting track, ‘Apollo’ and his scorching collaboration with Dyro and Bright Lights, ‘Never Say Goodbye’, as well as his single ‘Dare You’ have become some of the biggest records over the past couple of years.
His performance at the 2013 Miami Ultra Music Festival would go on to become the stuff of legend. Clocking up a staggering 6 million views in just 8 weeks, Hardwell’s set broke all records for the most watched Ultra live broadcast during UMF with over 80,000 people watching his set via the feed.
Following on from his 2012 Tomorrowland set, which to date has received over 21 millions views on YouTube, Hardwell returned to the mainstage of Tomorrowland in 2013 where he played yet another inimitable set that took a frenzied Tomorrowland audience on a ride of a lifetime. This time the liveset amassed in excess of 1 million views in just a few days and has currently been viewed over 22 million times on YouTube; the inexorable rate at which his DJ sets are viewed by fans around the world has made him the single most in demand liveset artist in the electronic scene today.
A true festival–straddling superstar his sets have conquered arena’s at the most prestigious and crowd-pleasing of parties in the world such as Ultra Music Festival Miami, Electronic Daisy Carnival Las Vegas, Electric Zoo, Creamfields, UMF Europe, Coachella, EDC London, Future Music Festival, TomorrowWorld, Global Gathering, Mysteryland, Dance Valley and various Sensations, including Amsterdam’s. While his Las Vegas residency at Hakkasan with his ‘Go Hardwell Or Go Home’ event series has cemented his position as one of the forerunning DJ stars in the US club scene.
In April 2013 Hardwell launched his most ambitious project to date when he unveiled his I Am Hardwell world tour concept at Amsterdam’s Heineken Music Hall to a 6000 capacity crowd. A spectacle of unprecedented musical vision and production detail, the entire show was broadcast live on a HD feed to 100,000’s of fans around the world and placed a solid marker to the immense popularity of Hardwell’s position within the dance community. After a hugely successful launch event, Hardwell is now on the road with worldwide travels for this new tour new concept. Spanning 6 continents the tour has seen sold-out shows in Jakarta, Singapore, Bangalore, Mumbai, Lisbon, London, Mexico City, Cape Town, Johannesburg, Tel Aviv, Guatemala City, Manchester, Edinburgh, Belfast, Istanbul, Sao Paulo, Brisbane, Melbourne and Sydney, making I Am Hardwell one of the must see shows over the past two years. Announcing the next phase of the I Am Hardwell tour, Hardwell took to the streets of New York’s for a Times Square takeover where he revealed the final chapter of the world adventure will culminate in North America with shows in Chicago, Toronto, San Francisco, Vancouver, Los Angeles, Miami completing his mammoth journey at the world renowned Madison Square Garden in New York for what will no doubt be a spectacle finale for Hardwell’s global scaling party concept.
During the 2013 editon of Amsterdam Dance Event, Hardwell held the world premiere of his ‘I Am Hardwell’ documentary in Amsterdam’s oldest and most famous cinema, Tuschinski. The documentary provides a captivating inside-look on Hardwell’s rise. With the motto - "If you can dream it, you can do it”. The film is now being shown in selected cinemas around the world.
The rise of Hardwell as a young boy from the city of Breda into a ripened international super-heavyweight has become an inspiring tale for all. Coming full circle from a dream to reality of wanting to become the ‘#1 DJ in the World’, we can be assured that the Hardwell name, face, and brand is a force that will drive electronic dance music for years to come....
Netherlands, 2005