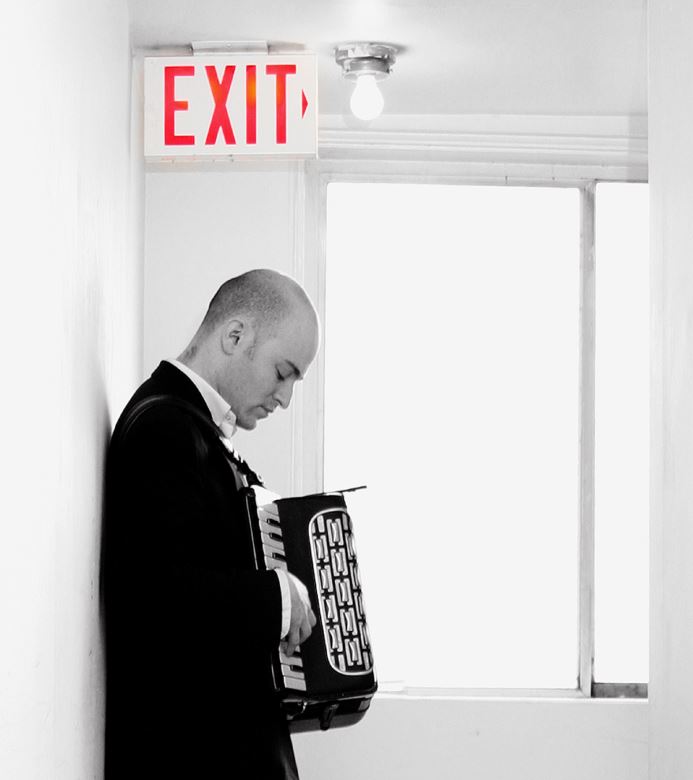 Geoff Berner (born 26 November 1971) is a Canadian singer-songwriter and accordionist. Predominantly a composer and performer of klezmer music, having proclaimed himself the "Avenging Angel of Klezmer", Berner's darkly humorous, insightful and satirical lyrics, as well as his cabaret live act, have gained him considerable underground acclaim and popularity throughout the world. He is often accompanied by Diona Davies on violin and Wayne Adams on drums. Frequent collaborators include Dan bern, Carolyn Mark, and The Corb Lund Band.
Born Geoffrey Berner in Vancouver, British Columbia, his early years had him learning the piano; Berner picked up the accordion after being asked why he did not play it at a party. His musical career began as lead vocalist and accordionist for eclectic punk band Terror of Tiny Town, who were active throughout most of the '90s. The band eventually faced economical troubles and ultimately disbanded after the release of two studio albums. In early 2000, had been deported to Norway, where he was now regularly performing, where he witnessed one of the earliest known live performances by Kaizers Orchestra, an alternative rock band with whom he would collaborate years later.
Upon his return to his homeland, Berner's began his career as a solo artist, his first release being an EP, Light Enough to Travel, released on the Sudden Death Records label in 2000. It featured two songs written for Terror of Tiny Town. Playing small venues in the general British Columbia area, Berner quickly gained a reputation for insightful humor and satirical lyrics. Furthermore, his song "Light Enough to Travel" became a hit single for fellow Canadian act, The Be Good Tanyas. We Shall Not Flag or Fail, We Shall Go On to the End, was released on the Black Hen label in 2003; this was to be both his first studio album as well as the only one featuring his then-current sound, which was more generally folk punk.
In 2004, Berner's musical direction would change dramatically; Berner became enamored of klezmer, the traditional music style of his Jewish faith. During a journey to Romania, where he nearly died from alcohol poisoning, Berner learned from the old masters of the klezmer style and shifted the focus of his music towards klezmer, seeking to "drag klezmer music, kicking and screaming, back into the bars." Subsequently, violinist Diona Davies and drummer Wayne Adams, who had traveled with him to Romania, would accompany him sporadically on tour as a klezmer backing band. In 2004 was released the double live album Live in Oslo, which was recorded at Mir, a small venue in Oslo, Norway of which Berner had grown fond during his stay in the country. The album featured several of his newly written klezmer songs alongside his older material.
In 2005, Berner released the first album in a trilogy of klezmer-themed albums, Whiskey Rabbi. The same year, he was hired as a support act for Kaizers Orchestra, whose nationwide fame in Norway would further his own popularity. A recording of one of his performances as a support act was included on Kaizers Orchestra's live DVD Viva La Vega, and he was also featured in the band's autobiographical book, Kontroll på kontinentet. The second album of the trilogy, The Wedding Dance of the Widow Bride was released in 2007. During the same year, he released a humorous instructional booklet entitled How to Be An Accordion Player; rather than being an introduction on how to play the instrument, the book deals chiefly with how to "be" an accordion player using various illustrative anecdotes.
In early 2008, Berner released a song which he joked that the committee for the 2010 Vancouver Olympic Games had hired him to write as the event's official theme song. The lyrics to the song, "Official Theme Song for the 2010 Vancouver / Whistler Olympic Games (The Dead Children Were Worth It!)" asserts that the government of British Columbia closed a provincial coroner's office which investigated the deaths of children to help pay for the Olympics. Later the same year he attracted controversy at the Winnipeg Folk Festival, when he made a joke at the expense of the festival's sponsor, Volkswagen, implying their connection to Nazi Germany. The third and final installment of the klezmer trilogy was Klezmer Mongrels, which was released in 2009.
Berner's fifth studio album, Victory Party, was released in 2011. The album's sound diverges from the traditional klezmer sound of his klezmer trilogy of albums, experimenting with many different instruments and genres to augment his sound, ranging from electronic dance to Eastern European punk. Berner's next project is an album of artists, among them Kaizers Orchestra, Carolyn Mark, and Rae Spoon, covering Berner's songs, to accompany/promote his upcoming novel Festival Man. The album has seen successful crowd-funding, and is to be expected in October 2013.
Throughout his musical career, Berner has been a performer of cover songs. His catalog includes cover versions of songs by John Prine, Leonard Cohen and Slutarded, among others. For the duration of most of his career, Berner covered songs by American ukulele singer-songwriter Carmaig de Forest. Recently, Berner's focus has shifted to Kris Demeanor; a cover of a Demeanor composition, "One Shoe", was recorded for his fourth studio album. Berner has himself been the subject of cover versions by artists such as Billy Bragg, David Taylor, and The Plaintiffs.