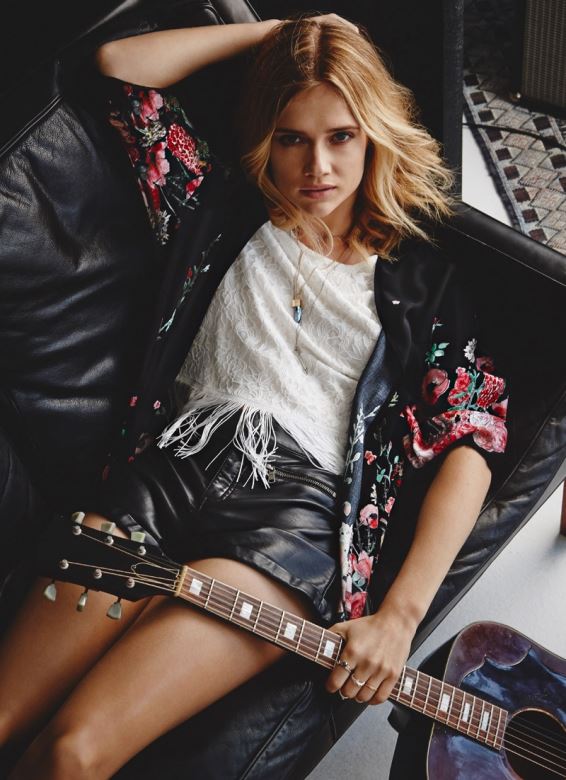 Florence Ellen Arnold (born 28 December 1988 in Bristol, UK), known professionally by her stage name Florrie, is an English drummer, singer-songwriter and model. She initially released her music independently, but signed to Sony Music under the newly-formed imprint Xenomania Records in 2013. As the drummer in Xenomania house band JFK, she has performed drums on Girls Aloud's "The Promise" and Alesha Dixon's "The Boy Does Nothing".
Florrie was born in Bristol and attended Colston's Girls' School. She took up playing the drums when she was in Greece on a family holiday aged six. As a teenager she played in bands in her home town, eventually moving to London. A meeting with the manager of Australian singer Gabriella Cilmi led Florrie to successfully audition as the drummer in the houseband of Xenomania.
In February 2010, Florrie released a free download through her official site of "Call 911 (Fred Falke Remix)". Since then, she has also released several remixes of "Call 911" and a number of other original tracks, such as "Panic Attack", "Fascinate Me" and "You Wanna Start Something".
On 10 November 2010, Florrie released her debut EP Introduction, featuring four original tracks: "Call of the Wild", "Give Me Your Love", "Summer Nights" and "Left Too Late" .
Florrie's second EP, Experiments, was released on 14 June 2011. It includes "Begging Me", "Experimenting with Rugs", "She Always Gets What She Wants", "Speed of Light", "What You Doing This For" and "I Took a Little Something".
Florrie followed Experiments with another EP, Late, released on 31 May 2012 - it features "Shot You Down", "I'm Gonna Get You Back", "Every Inch" and "To The End".
After a number of independent releases, Florrie signed to Sony Music in early 2013. She collaborated with Sony in advertisements for their XBA-C10 headphones, also releasing the single "Live a Little" which appears in the spots.
In February 2014, Florrie announced her first major label release, the Sirens EP. Released in April, it features three songs - all of which receiving music videos - "Seashells", "Free Falling" and "Wanna Control Myself". A remix of the song "Little White Lies" was also included on the EP.
The former track was released as a single shortly after. It was officially released in August with an accompanying EP, featuring five remixes and updated versions of previously released songs "Left Too Late" and "Give Me Your Love".
Florrie announced her first single proper on Sony, "Too Young To Remember", in January 2015, and a partnership was revealed with clothing retailer H&M that saw her become the face of their H&M Loves Music collection, with a tie-in to the single.
As of February 2015, a release date or title has not been confirmed for Florrie's debut studio album, but it is expected to be released in summer 2015.
Site: Discogs and http://florrie.com (official)