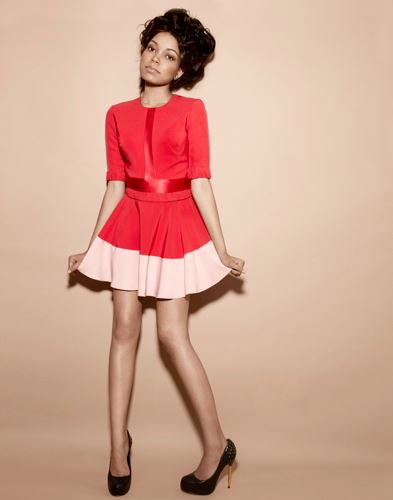 Dionne Bromfield (born 1996 in London) is an English singer.
In September 2009 Bromfield was the first artist to be signed to Amy Winehouse's record label Lioness Records. Her debut album Introducing Dionne Bromfield was released on 12 October 2009 and first single "Mama Said" was released on 2 November 2009. Yeah Right was released on March 20, 2011 as the first single from her second album.
Introducing Dionne Bromfield features covers of 12 classic songs that reflect her love of vintage soul music and ‘60s girl groups. Tracks include the Motown anthem Ain’t No Mountain High Enough, which Dionne has recorded as a duet with Zalon, and Foolish Little Girl, originally a hit for The Shirelles in 1963.
As Dionne explains: “Mostly I listen to Motown – that’s proper music. And these songs I’ve chosen, I just grew up around them. My mum had lots of old Motown LPs, and when you’re brought up listening to something you start singing the way these people are singing. My favourite singer is Marvin Gaye, and Aretha Franklin is amazing as well – she has such a big voice! I also like Ne-Yo very much, I like Beyonce, but I don’t want to go R&B or pop or anything like that. I want to keep it soul.”
It was at the age of ten that Dionne started to think seriously about singing, after an aunt recognised her potential and referred her to a professional vocal coach. A year later she sang for Amy for the first time. “I said, ‘You’re an amazing singer’,” Amy recalls. “We also played guitar together, and the way she accompanies herself on guitar is amazing too.”
Amy put Dionne together with Jon Moon, the producer who worked on the deluxe edition of Amy’s Back To Black album and whose credits also include N-Dubz, Pink Floyd’s Roger Waters and Yusuf Islam (formerly Cat Stevens). Dionne says: “The first song we did was Ain’t No Mountain High Enough. I played it to Amy and she said, ‘Oh my God, that’s the nuts!’ Eventually we started doing more and more songs and it turned into an album.”
Backed by Amy’s regular touring band, Dionne recorded a wide variety of songs from the 1960s and early ‘70s: early Tamla Motown favourite Beechwood 4-5789, a hit for The Marvelettes in 1962; He’s So Fine, a US number one for The Chiffons in 1964; Until You Come Back To Me (That’s What I’m Gonna Do), co-written and originally recorded by Stevie Wonder in ’67 and later covered by Aretha Franklin in 1973; and My Boy Lollipop, a UK number one for Millie in 1964, and a song first heard by Dionne when she saw the Spice Girls movie Spiceworld. “I thought it was a good song,” she says, “but when I heard Millie’s version I thought, this is the proper one. And Amy said, ‘You’ve got to do it – it’s my favourite tune!’”
When choosing each song for the album, Dionne had simple criteria. “You need a good melody and a good lyric,” she says. “To write a really great song, you have to really mean it. If you put your all into it, if you really feel it, you’re showing what you feel and what you want others to feel about that song.”
This is a principle that Dionne is applying to her own songwriting, although she is saving her original songs for the future. Says Amy: “Dionne’s writing all the time. I want her to experience life so that she can write songs. But while she’s doing a covers album she’s not singing all her songs, she’s not so consumed by it. Singing songs that are very personal, it’s very deep. But she knows what she’s doing – to be honest, when I say Dionne’s like my sister, a lot of the time she’s like my older sister! I’m just so proud of her.”
“I’m really happy with my album,” Dionne says, “I love these songs, and I’m really excited about going out and singing them. Once you’re on a stage, it’s like you’re home.”