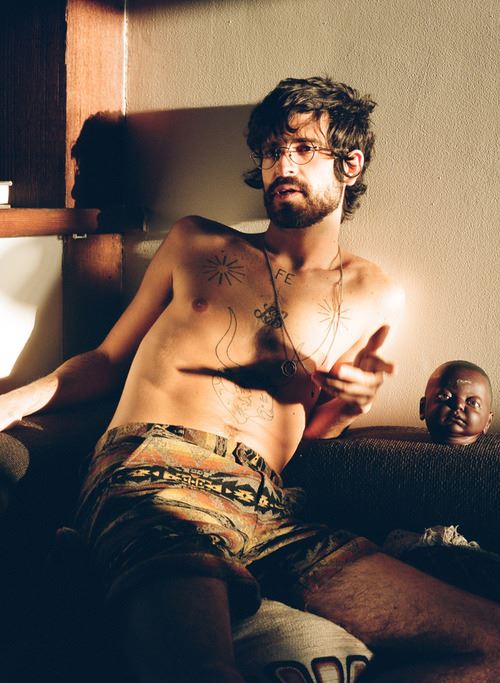 Devendra Obi Banhart (born May 30, 1981) is a Venezuelan American singer-songwriter and visual artist. Banhart was born in Houston, Texas and was raised by his mother in Venezuela, until he moved to California as a teenager. His first few records were released on the Young God Records label from New York City. His most recent CD was released by Nonesuch. He is one of the most popular artists to come out of the "New Weird America" movement, which includes performers such as Faun Fables, Viking Moses, Jack Rose, Jana Hunter, Arborea, The MV & EE Medicine Show, Currituck Co., Six Organs of Admittance, and The Royal We, among others. He also often joins the band known as Vetiver.
Banhart is considered to have an eclectic style, with many of his songs seemingly following a stream-of-consciousness vein, being hard to decipher and non-literal. His music tends to consist of fairly simple guitar melodies with minimal other instrumentation, and his lyrical themes are often surreal and naturalistic. His involvement in the Los Angeles artist community is reflected in Smokey Rolls Down Thunder Canyon, released in September 2007. He gained some underground notoriety in New York for performing several of his early shows with underwear on his head for the duration of the performance.
Banhart's most recent tour of the United States saw him perform with his full band, which is currently known as Power Mineral. Power Mineral included Andy Cabic (Vetiver), Greg Rogove (Priestbird), Noah Georgeson, Luckey Remington, Pete Newsom, Otto Hauser (Vetiver, Currituck Co., Espers, Nick Castro), Kevin Barker (Currituck Co.), and others. The band claims to rechristen itself when a name comes to them, and has previously been known as Fried Hummingbird, Vagina Burglars, Hairy Fairy Band, Las Putas Locas, Stoner Boner, Spiritual Boner, Bummer Hummer, Brain Taint, Love Fart, Bathhouse Of The Winds, and First Woman Millionaire among other names.
Banhart was discovered by Michael Gira of Swans, who released his Oh Me Oh My... The Way the Day Goes by the Sun Is Setting Dogs Are Dreaming… album on his own Young God Records label in 2002. In 2005, Banhart (along with Andy Cabic and Revolver USA) created the Gnomonsong record label. In 2006 he helped to curate an edition of the British All Tomorrow's Parties festival.
Banhart also was one of the younger musicians responsible for "rediscovering" the music of folksinger Vashti Bunyan. Bunyan is a guest vocalist on his album Rejoicing in the Hands.