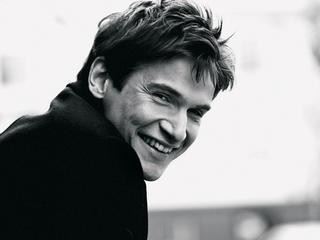 Official sites:
www.cortes.is
www.myspace.com/officialcortes
In 1999, Cortes won the lead role of Raoul, Vicomte de Chagny, in The Phantom of the Opera at Her Majesty's Theatre in London's West End. It was in this role that he discovered his ability to sing high notes. "I'd been having a bad evening and I was miserable, felt I wasn't even good enough to be in the chorus. Then in my next scene I went up to the C sharp and it just stayed there. Christine, the soprano, was walking towards me and her mouth fell open and she whispered to me, 'Wow, is that really you?' I've had those notes ever since."
However, when invited to extend his contract, Cortes declined. "I took a couple of days to think it over but it wasn't a difficult decision. I knew I wanted to move on. It was one of the things I had to do on my journey but I loved opera more." He won a scholarship to the opera course at the Royal Academy of Music, where both his sister Nanna and mezzo-soprano Katherine Jenkins were at the time. At the Academy, roles he sang included Florville in Il signor Bruschino and Fenton in Verdi's Falstaff.
After leaving the Academy, Cortes worked across Europe, playing lead tenor roles in operas by Verdi, Rossini and Donizetti in opera houses in Germany and Scandinavia. He also sang Mendelssohn's quartets from Elijah with his sister at Carnegie Hall, New York City. Other engagements included José in Carmen Negra, Curly in Rodgers and Hammerstein's Oklahoma!, The Young Man in Dokaðu við, the Italian Tenor in Strauss's Der Rosenkavalier for the Icelandic Opera, Ferrando in Mozart's Così fan tutte for Co–Opera Ireland, Rinuccio in Puccini's Gianni Schicchi for Nordurop Opera, and a Verdi Gala at The Anvil in Basingstoke, England. His concert repertoire includes Bach's Mass in B Minor, St. Nicolas, Dvořák's Requiem, Verdi's Requiem, Handel's Messiah, Elijah, Puccini's Missa di Gloria, Rossini's Petite Messe Solennelle and Stabat Mater, and Saint-Saëns' Christmas Oratorio and Les Noces.
Highlights of his career in 2004 and 2005 included his first appearances with English Touring Opera singing Ferrando in Così fan tutte, and at the Rossini in Wildbad Festival singing Conte Alberto in L'occasione fa il ladro. He recently performed the role of The Duke of Mantua in Verdi's Rigoletto for Opera Nordfjord.
Cortes and Katherine Jenkins, Cortes was approached by Einar Bárðarson, manager of Icelandic girl band Nylon, who suggested that he make a record like Andrea Bocelli or Josh Groban. The songs, including Lucio Dalla's "Caruso" and Ennio Morricone's "Nella Fantasia", Malavasi's "Romanza", David Foster and Carole Bayer Sager's "The Prayer" and some Icelandic numbers, were chosen by Cortes, Bárðarson and Björgvin Halldórsson – the "Frank Sinatra of Iceland" – to best show off his voice. The record, eponymously titled Cortes, was released in Iceland in 2005 and turned out to be the fastest-selling ever in that country, achieving double platinum status in three months.
His debut concert in Reykjavík in 2002, where he was joined by Katherine Jenkins, was a triumph. Cortes returned the favour as a guest performer during Jenkins' autumn tour in 2006. He was hailed for his commanding performances of Puccini's aria "Nessun Dorma" and widely admired for his brooding good looks. His single "Luna" (2007), featuring English soul singer Heather Small, reached number two on the Icelandic online music charts.
Cortes's ambition is to sing Otello at the Royal Opera House in Covent Garden, London.
His debut album in the UK, Cortes, was released on 16 April 2007.[1][2]
His second album is When You Say You Love Me is released 23 June 2008.