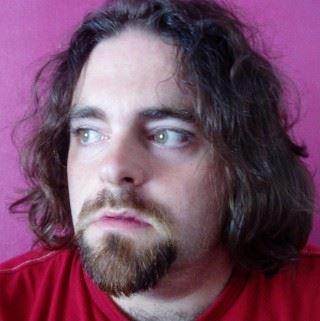 Chris T-T is a singer-songwriter with a unique gift of capturing the subtleties of British life. Not one to keep his opinions to himself, this articulation often results in audience members being offended, outraged or otherwise aghast. He’s received earfuls from angry old ladies in hunting villages, indie crowds in Essex and a few outraged liberals at the Leftfield stage during Glastonbury Festival. He must be doing something right.
After spending three years at Leeds University earning a degree in pop music, the inevitable move to London followed. He spent 1999 slogging at a day job, and recorded his first album during evenings and weekends on the cobbled-together not-exactly-state-of-the-art recording equipment in his bedroom. The result was Beatverse, released in 1999 on his own label, Wine Cellar. It sold fewer than 500 copies, but it taught him not be afraid of being opinionated and brutally honest in his songs.
Snowstorm Records loved the album and offered to fund the next T-T release. The result was 2000’s Panic Attack at Sainsbury’s, a mixed bag of pop anthems (You Can Be Flirty), anti-establishment sing-alongs (Dreaming of Injured Popstars) and twisted love songs (Open Books, Exeat).
Over the next few years, T-T became intimate with every venue on the UK indie circuit, driving beat-up vans and sleeping on floors while getting paid next-to-nothing to perform to an ever-increasing base of dedicated fans.
With his past two albums, the first two parts of the London Trilogy ‘The 253’ (2001) and ‘London Is Sinking’ (2003), as well as overtly political mini-album ‘9 Red Songs’ (2005), Chris T-T has tackled life's grand themes of war, money, politics, love, sex, and death, and has transformed them into highly personal and highly emotional songs, championed by everyone from NME to Rolling Stone, from Radio 1 to Radio 3, and 6Music.
As the Guardian said: "The genius of Chris T-T's songwriting is his ability to humanise even the most outlandish conceits. They seem instead like brilliant ideas that no-one else could've come up with."
His latest offering ‘Capital’ (released in March 2008 through Xtra Mile Recordings), a stunning collection of carefully crafted fuzzed-up folk-rock anthems, is the climactic final part of the London Trilogy.
While ‘The 253’ uses wry observations, sincerity, and sting to depict gritty modern life in London, and ‘London Is Sinking’ portrays a city fraught with prejudice and fear, ‘Capital’ imagines the city devouring itself. As Chris explains:
“In my head it's a civil war in London with the authorities versus normal people, and the insurrectionists (the good guys) are hoodlum kids. Though in a way, the whole thing's just a big clunky metaphor for modern urban decay."
This is no grand dystopian vision, though, but rather a fine portrait of the human cost of civil war, with a love story at its heart. “I was inspired by how difficult it is to imagine what it's like in a war zone,” Chris says. “Even watching Baghdad on TV, you get no sense of real, normal people trying to live there, get to work, eat, even have fun. The characters in Capital are let down by basic failing infrastructure as well as soldiers roaming the streets bashing people up.”
Chris T-T has produced yet another brilliantly intricate and hilariously acerbic album, with musical styles ranging from electronic synth-pop to moody piano-led folk. ‘Capital’, featuring the world-class drumming of Andy Burrows (Razorlight), reaches a depth too few try to attain.
Official websites:
http://www.christt.com/
http://www.myspace.com/christtuk
http://www.facebook.com/profile.php?id=20876321656