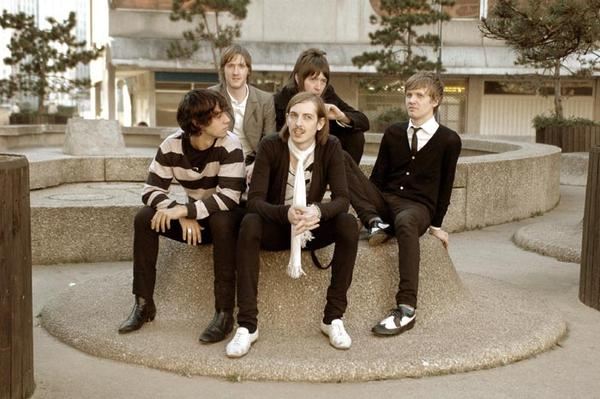 Cazals: a short history
OK, so let’s begin with some things you may already know about Cazals: 1. They’ve known Pete Doherty since they were boys, and have toured with Babyshambles. 2. On account of living in London and - y’know - knowing how to dress well, some people think they’re fashonistas; 3. All five of ’em used to live together. In Whitechapel; 4. A couple of them made cameo appearances in Nathan Barley. 5. They used to put on all night warehouse parties – most notably Cazalaid, organised to raise money after ALL their equipment got stolen – in London’s east end. Bloc Party played. It was a great night.
Got all that? Good. Now please forget it. Cazals are as bored of it as you should be. For Cazals, as you will see, are a band who, in every respect, are all about the future.
“There’s so much more to this band than that,” Says lead guitarist (& manager!) Daniel. This is true. For example: second guitarist Luca makes a healthy living DJ’ing electronic music (“I’m more into Digitalism than I am into guitar stuff,” he shrugs), Phil, the singer, has been cast in a number of up-coming British Independent films, while bassist Martin is a re-mixer and producer of some repute. He’s the man mainly responsible for making ‘What Of Our Future?’ - his band’s debut album due out in the new year - sound like one of the most forward-thinking guitar based albums in ages. His recording implements include drainpipes (as in actual pipes, not the trousers), bits of paper being ripped and effects pedals he has made himself out of Gameboys. But anyway, we’re getting ahead of ourselves here…
Cazals are signed to French record label Kitsune. It is an electronic music label, home to Digitalism, Simian Mobile Disco, Crystal Castles and other such forward thinkers. You may know them from their excellent Maison compilations or for releasing vinyl only singles by Klaxons, Foals and Late of The Pier. They are not normally interested in guitar bands (especially those with retrogressive tendencies), but they made an exception for Cazals. This is significant.
“Basically they heard our track ‘Poor Innocent Boys’, and put it on their Maison 2 compilation,” says Daniel (It’s worth pointing out here that the bouncing, razor-sharp, handclap-assisted rhythms of said former single resided on this record between a Boyz Noise remix and a track by Azzido Da Bass). “They were ringing us up to ask what label we were on, and we were like, ‘Erm, none!”
“They’ve been amazing for us,” enthuses Phil. “It’s not a huge label, so they haven’t got a huge amount of money, but they had no problems with us taking our time to make sure the album was perfect. Perfect as far as we were concerned, and them.”
The investment of time by both band and label has paid off massively. One only has to listen to the first minute of ‘What Of Our Future?’s opener ‘New Boy In Town’ to realise it is a record of tremendous depth. There are spiky guitars, a rasping vocal and an unforgettable melody, for certain, but there are subtle textures here, too – at points you’d be forgiven for thinking Daft Punk were recording in the next room. ‘To Cut A Long Story Short’ continues in this vein, and by the time the breakdown in the middle of the synthline led ‘Somebody Somewhere’ arrives, it’s anybody’s as to which instrument is making which noise.
“We spent a long time on the arrangements,” Daniel continues. “We’re not one of those bands who just bash out a song.” It shows. ‘A Big Mistake’ is driven by lo-fi electronic drum loops; ‘We’re Just The Same’ a gorgeous, half-paced pop song that exhibits the French influence that has seeped into Cazals’ music; ‘Comfortable Silence’, meanwhile, is – frankly – bonkers experimentalism, the likes of which few British guitar bands would dare even attempt. Even in the more conventional moments here – the frenetic ‘Life Is Boring’, the aforementioned ‘Poor Innocent Boys’ – are awash with layer upon layer of unconventional noise. And then there’s closer ‘Time Of Our Lives’ – a song that begins its life as a genuine, piano-led weepy, then builds and builds into a waltzing mini-epic. For all the musical adventure that precedes it, it’s, y’know, moving. “That’s another thing which is important,” points out Phil, “Every song on the record is a true fucking story.”
So no, not Shoreditch trendies. Not fashonistas. Just one of the most forward thinking British guitar bands in Britain today.
The band split up in November 2009 to pursue their separate interests, mainly producing and other musical projects.