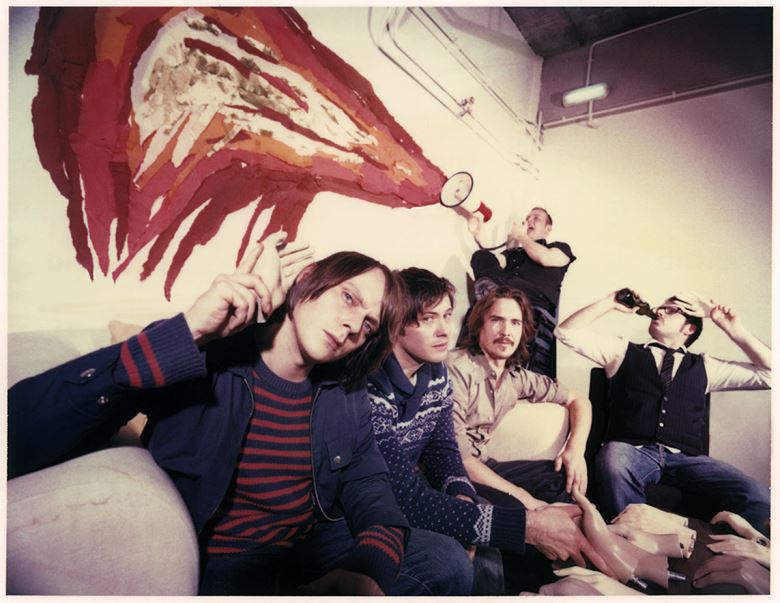 Cashier No.9 http://cashierno9.com/
For several years now, Danny Todd has been an accessory to great music from Northern Ireland. A gifted guitarist, songwriter and producer, he has finally found the perfect vehicle for his unique hybrid of pop, rock, indie, country and electronica. To make ends meet as a teenager there was less inspiring work in a coffee shop, where he was appointed as Cashier No 5. That didn’t scan so well, but with a minor change, it provided an identity for the new band: Cashier No.9.
The insanely catchy, brash and swaggering Cashier No. 9 have made sporadic appearances in the past, but having expanded into a blistering live act that includes life-long friends James Smith on guitar, Stuart Magowan on bass, Philip Duffy on drums and Ronan Quinn on keys/guitar, it’s now emphatically their turn. Revealing a clutch of songs that have been disgorging from Danny’s head into his laptop over the past year and a half they have already won fans as diverse as Steve Lamacq, Janice Long, David Holmes, John Kennedy, Rob Da Bank, and Jon Hillcock, all of whom are playing the debut single ’42 West Avenue’ (scheduled for digital and limited vinyl release on October 27th 2008 through No Dancing records). These key taste-makers are providing their listeners the opportunity to discern the band’s plethora of diverse influences that range from Captain Beefheart to T.Rex and Primal Scream to The Bees, by way of Syd Barrett, Paul Simon and Pavement. “I don’t want to pin myself down to one sound,” Danny modestly reckons.
Their live CV is rapidly deepening too. In addition to numerous storming club shows in Belfast, Dublin, London, Birmingham, Liverpool and Manchester, Cashier No 9 have represented Belfast at London’s Electric Proms; they’ve performed at the Knitting Factory in New York, and Brighton’s Great Escape in 2007 and 2008; they’ve supported Gruff Rhys, the Ting Tings and David Holmes; they’ve graced the stage at Ireland’s Electric Picnic festival, and headlined the NIMIC showcase at 2008’s In The City, a gig so well-received it was credited as a highlight on John Kennedy’s webpage at xfm.co.uk and mentioned by Janice Long on BBC Radio 2 the next day. They’ve recorded live sessions for BBC Radio 1 and BBC Radio ATL, and have BBC Radio 2 and BBC Radio Ulster sessions in the pipeline.
Recently they provided the lead track on ‘The Oh Yeah Sessions’, a new compilation album recorded in Belfast’s emerging music centre and showcasing the very best of new Irish music, and the NIMIC-sponsored ‘New Music from Northern Ireland’ compilation, currently at radio and online press all over the USA and picking up spins at Indie 103 in LA and 98 KUPD in Phoenix, AZ. The sleeve notes for ‘Oh Yeah’, written by Snow Patrol’s Gary Lightbody, approve of the track ‘When Jackie Shone’, noting the “ominous shuffle and head-bending guitars”. Alternative Ulster magazine have put ’42 West Avenue’ at #11 in their 50th-issue ‘Top 50 Northern Irish Songs of Our Lifetime’ feature, and their song ‘Goodbye Friend’ will appear in the 2009 film ‘Cherrybomb’ staring Rupert Grint of Harry Potter fame. The band have also been Band of the Day at Guardian.co.uk and featured on BBC.co.uk.
In an age of stagnant sound-alike bands where style seems to have all but usurped substance, Cashier No.9 are an alternative pop band ready to lead the counter revolution.
"Staggering, nonchalant talent" – BBC NI Across the line
“One of my favourite tunes” – Janice Long, Radio 2
"Thanks very much for turning us on to this! Cashier No.9 is the name of the band" –Steve Lamacq, Radio 2
"Ominous shuffle-beats and head-bending guitars" – Guardian.co.uk
"A band you want to hear more from." – BBC.co.uk
"Get your cheque-books out!" – Radio 1, Rob da Bank