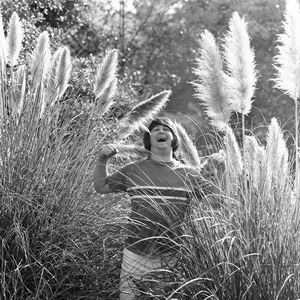 Brian Douglas Wilson (born June 20, 1942 in Inglewood, California) is an American singer-songwriter, producer, and musician, best known for being the principal songwriter and co-lead singer for The Beach Boys, co-founded with brothers Carl and Dennis. Once known for his iconic falsetto, much of Brian's most well-known work is tinged with melancholy and existentialism. Due to his unorthodox approach to composition, arrangement, and recording, Brian is widely acknowledged as one of the most innovative and influential creative forces in popular music.
The first official release credited to Wilson as a solo artist was the 1966 Beach Boys single "Caroline, No" (b/w "Summer Means New Love"), due to being the single's arranger and sole vocal presence. Around the same time, Wilson also produced cuts for other artists such as The Beach Boys' spear counterpart The Honeys (member Marilyn Rovell was Wilson's first wife), and Jan & Dean, whose "Surf City" became a #1 hit single. The 1977 album Love You and the unreleased Adult/Child (recorded during the same sessions) were tentatively considered for release as Brian Wilson solo albums, although the idea fell through. Love You would be last Beach Boys albums to feature Wilson's extended involvement for the better part of 35 years.
Brian's solo career, despite a few false starts, began in earnest with the 1987 single "Let's Go to Heaven in My Car" (b/w "Too Much Sugar"), featured in the film Police Academy 4: Citizens on Patrol. A year later, his debut solo album, the eponymous Brian Wilson, was released, at the time hailed as a 1980s equivalent of what is widely regarded as Wilson's magnum opus, 1966's Pet Sounds. A follow-up in much the same vein, Sweet Insanity, was scrapped due to various personal issues.
Also left on the shelf was a fruitful collaborative project with multi-instrumentalist Andy Paley, informally known as "The Paley Sessions". Over the years, a few tracks were released through various albums, but dozens more have been bootlegged, and a comprehensive release has yet to be assembled.
Instead, 1995 saw the release of two albums: I Just Wasn't Made for These Times, a collection of re-recordings seemingly meant to reintroduce him to the public, and Orange Crate Art, a song cycle written by one-time lyricist Van Dyke Parks with contributions by Wilson, were released. An album of new compositions entitled Imagination followed in 1998.
Wilson began performing live again in 1999, and with his confidence as a performer growing ever stronger, he chose to release a live album documenting the Imagination tour (Live at the Roxy Theatre). In 2002, he began incorporating Pet Sounds in its entirety into his live performances; this, too, was documented in a live album titled Pet Sounds Live.
In 2004, Wilson revived and completed SMiLE, his unfinished 1967 album, performing the work in its entirety on a celebrated tour. The positive response lead him to record a studio version which met similar acclaim; the album cut "Mrs. O'Leary's Cow" won a Grammy Award for Best Instrumental. That same year, he released Gettin' in Over My Head (containing many songs originating with the ill-fated Sweet Insanity album), featuring guest musicians Elton John, Paul McCartney, Eric Clapton, and brother Carl, who passed away in 1998. Brian's song "Lay Down Burden" was written in tribute of his brother.
Brian released a collection of Christmas songs entitled What I Really Want For Christmas in 2005. His 2008 album, That Lucky Old Sun, marked his return to Capitol Records. As part of a two-album deal with Disney, Wilson released Reimagines Gershwin (2010), a tribute to his idol George Gershwin, and In the Key of Disney (2011), a collection of cover songs from various Disney films.
2012 saw the The Beach Boys celebrate their 50th anniversary, reuniting a majority of surviving band members including Brian, for a worldwide tour as well as the release of an album, That's Why God Made the Radio, composed almost entirely by Wilson with an assortment of co-writers. The album became the group's biggest chart success in decades, peaking at #3 on the Billboard album charts. Status quo was restored as the group members went their separate ways again after the conclusion of the tour.
In 2015, Wilson released his eleventh studio album, No Pier Pressure. Originally conceived as a follow-up to That's Why God Made the Radio before The Beach Boys reunion fell through, the album features guest appearances by contemporary artists such as Kacey Musgraves, She & Him, and Nate Ruess (of fun.), as well as former Beach Boys Al Jardine, Blondie Chaplin, and David Marks. Summer 2015 will also see the public release of Wilson's autobiographical motion picture Love and Mercy (named after Wilson's 1988 comeback single), with actors Paul Dano and John Cusack starring as a younger and older Wilson.