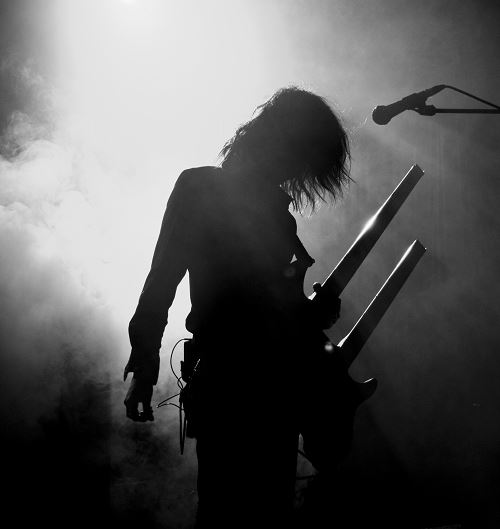 There are several artists using this name:
1) Boris (ボリス) are a Japanese experimental metal band formed in Tokyo in 1992. The band's original lineup consisted of Atsuo, Takeshi, Wata, and Nagata who was the band's original drummer. After his departure in 1996, Atsuo took over drums and the lineup has remained consistent to this day. Boris draw influence from a huge variety of styles including, but not limited to, psychedelic rock, punk, sludge, doom metal, drone, pop, noise, shoegaze, and ambient. The band's name is taken from a song on Melvins' album, Bullhead.
They released their debut full-length album, Absolutego, on their own label, Fangs Anal Satan, in 1996. Since its formation, Boris have released 19 full-length albums, four live albums, six collaborations with Japanese noise legend Merzbow among various other collaborations, and one best album Variations which focused more on the rock side of the band.
Boris saw a huge increase in popularity when Southern Lord reissued their works in North America, garnering them critical acclaim and recognition in music press. Pink, originally released in 2005 in Japan via Diwphalanx, was reissued in 2006 by Southern Lord and met with a very positive reception in the US. Blender magazine and SPIN magazine both named it one of the year's best albums. The album also made the top of the metal section in Canadian magazine Exclaim's reader's poll of that year, and was in the top 10 of Pitchfork Media's top 50 records of the year.
In 2011, Boris announced plans to release four full-length albums in the same year. The first to be released was Klatter, their sixth collaboration with Merzbow, on February 23. The second was New Album, their fifteenth album, on March 16. The album consists mainly of J-pop with elements of psychedelic rock and electronic music. The next two albums, Heavy Rocks (2011) and Attention Please, were released simultaneously on May 24 through Sargent House. Heavy Rocks shares its name and cover art style with Heavy Rocks, released in 2002 in Japan. Attention Please is mostly noted for featuring lead vocals by Wata on each song. Boris co-headlined a European tour with their new label-mates Russian Circles throughout the summer from June 17 to July 17 and continued touring Europe alone from July 19 to July 24. They also headlined a North American fall tour from October 7 to November 12 with various openers including Tera Melos, Asobi Seksu, True Widow, Liturgy, Master Musicians of Bukkake, Coliseum, and Joe Lally.
Boris maintains a Tumblr page at http://borisheavyrocks.tumblr.com and an official homepage at http://www.borisheavyrocks.com.
2) Boris or Bo Saris is a Dutch male soul/pop singer. He was the winner of the second season of Idols (2004) in the Netherlands.
The first single When You Think of Me became an instant number 1 hit in The Netherlands, sold over 80.000 copies, and received a platinum status. On June 10th his first solo album Rely on Me was released, became a success as well and reached the golden certificate (40,000+ copies) within a week.
In 2006 he released his second album called Holy Pleasure.
More information can be found on this (Dutch) Wikipedia page: http://nl.wikipedia.org/wiki/Boris_Titulaer