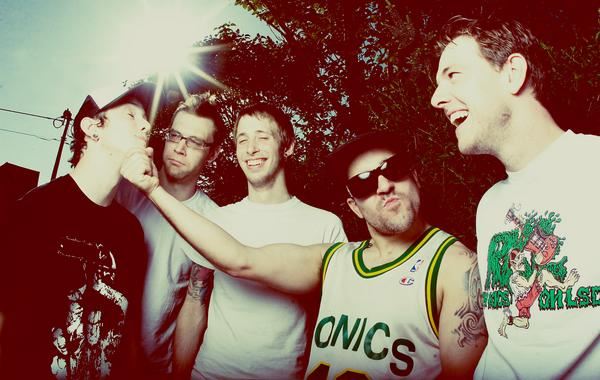 A Wilhelm Scream is a punk rock/melodic hardcore band from New Bedford, Massachusetts, United States. Their name is a reference to the Wilhelm scream, a famous stock sound effect which mainly is used in films. The band previously went by the names Smackin' Isaiah, Koen and Adam's Crack, though the former was the only name to be used in any major release. The reason for the name changes "from Koen to Smackin' Isaiah to A Wilhelm Scream was really a matter of them adding new members, and progressing/maturing as a band."
Early years (1992 - 2000)
In 1993, drummer Trevor Reilly, guitarist John Carvalho and bassist Jonathan Teves formed the band Adam's Crack and recorded a Nirvana-inspired demo cassette. In 1994 Reilly and Carvalho started a side band with Nuno Pereira on vocals, and others. The side band played one show before disbanding. Members from the two bands would merge into one, taking the name Koen. The lineup of Koen consisted of Pereira (vocals), Reilly (drums), Teves (bass), Carvalho (rhythm guitar) and friend Mat Demelo (lead guitar and trumpet). Under the name Koen, the band released one cassette titled "The Big Fall...", this time with their sound evolving more into skate punk and ska. In 1997, the band changed its name again, this time to Smackin' Isaiah, and released a cassette titled "Give Girls More Beer...". Mat Demelo left the band shortly after. During this time, Reilly would switch between drumming and guitar duties, with an unknown drummer playing in the band for a brief amount of time. Nicholas Angelini was eventually tapped to play drums on a permanent basis. In 1998, the band released another demo cassette, titled "Gets Eaten Alive".
Tank Records era (2000 - 2001)
The band's first CD release was on Tank Records, a record label created by Carvalho and Teves. The CD was a split release with the bands Moronique and Merrick, entitled "6:6:6" after the number of tracks each band contributed. Soon after, the band released its debut album, "The Way to a Girl's Heart Is Through Her Boyfriend's Stomach". The band considers this their first "real" release, as all the songs had been written after Angelini joined the band. In retrospect, they consider it their most cheerful record. It was reissued the following year on All About Records, but the band stayed with Tank Records to release its second album, "Benefits Of Thinking Out Loud. During the album's recording, the band members had a strained relationship as they argued over its production. Six outtakes from the album's recording sessions were compiled onto an EP entitled "The Champagne of Bands... We Know Sexy" released by Fork in Hand Records. Following its release, Carvalho left the band. Christopher Levesque quickly replaced him.
Final name change and move to Nitro (2002 - present)
With the band moving to a more serious style with Benefits, they decided to once more change their name, finally settling on A Wilhelm Scream. Signing with new label Jump Start Records, they re-released "Benefits of Thinking Out Loud" under their new name. After touring the United States and Canada a few times, they then began recording their next album, "Mute Print", with Jump Start Records. For the recording of the album, the band decided to put "as much shit as you can possibly fit into a song and pull off live" into the songs, to which they attribute their faster, more aggressive and more technical sound. The album was produced by Bill Stevenson and Jason Livermore, whom the band looked up to. Although the album was finished while the band was signed to Jump Start Records, the rights to the album were then bought by Nitro Records, who released it in 2004.
Only a year after "Mute Print", the band released a second record on Nitro Records, again produced by Stevenson and Livermore. The record, entitled "Ruiner", was released on August 16, 2005. Following stress from touring, founding member Jonathan Teves left the band, and was replaced by bassist Curtiss Lopez. They then embarked on their first European tour with Lagwagon, and also toured with Less than Jake. Midway through the latter tour, Lopez abruptly quit the band. This left A Wilhelm Scream without a permanent bassist until Brian J. Robinson joined in April. The band continued to tour throughout 2006. They also released an 7-inch Extended play titled "Diver" on Jump Start Records. This was because the title track was recorded during the "Mute Print" sessions, but left off the album, and thus was not purchased by Nitro Records.
In 2007, the band returned to the studio with Stevenson and Livermore to record their third album with Nitro Records. The record, according to the band, was "very, very fast" and a few songs were dropped for not being fast enough. The record, "Career Suicide", was released on October 9, 2007. However, only two weeks before its street date, long-time guitarist Chris Levesque announced that he was leaving the band, elaborating with the following statement:
"I have maintained for the duration of my time in Smackin' Isaiah/A Wilhelm Scream that when it stopped being fun, I would give it up. The bottom line here is that I just don't enjoy the day-in, day-out grind of being on tour anymore.... There are no personal or creative differences between any of us. None of that bullshit. I still love this band and everything it stands for. The six years that I've spent in SI/AWS have been the best of my life. We've accomplished more than I ever expected, and I take with me with more amazing memories than most people experience in a lifetime."
The band began their tour in support of "Career Suicide" with several rotating guitarists, before Mike Supina, formerly of the Detroit-based band Alucard, was announced as Levesque's permanent replacement. The tour brought the band to over eighteen different countries, finishing in September 2008. Following its conclusion, guitarist Trevor Reilly announced in his blog that the band would take a break for the rest of the year, but implied that they would write new songs soon.
www.awilhelmscream.com
www.myspace.com/awilhelmscream