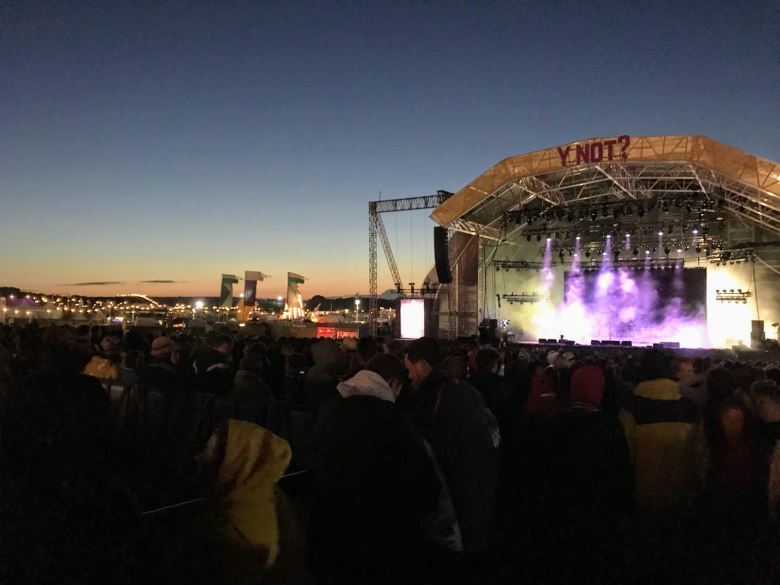 Derbyshire is, quite frankly, one of the most picturesque counties that our kingdom doth contain. Splendidly grandiose spa towns surround this velveteen nook in the patchwork hills, which made the journey to the festival all the more fabulous, as though we were gliding through glistening fauna and flora on the shoulders of a hawk eyed eagle. A rollercoaster ride through emerald satin, with a heavy sumptuous smug sunshine illuminating our descent in to the moss..

Friday night saw The Libertines shower a grinning audience of lovesick girls blurting their adoration to the quartet, as their male counterparts pouted, mimicking themselves as part of the band. Watching their final few songs, spinning round the Ferris wheel, rum and coke in hand was an extravagance I would thoroughly recommend to all, the views across the superbly illuminated & animated throngs rippling below a dreamy night sky was surreal.

As is the same with the start of most weekends away, energies were running high in our evanescent playground, and, I at times felt my own age in what was potentially for many a ‘gateway’ festival, which, Y Not caters to superbly, with its size, line up and pretty relaxed approach to the ascribed indoctrination of a typical rudimentary rural gig. We were met with some excellent sounds from the Mystery Jets in the cider garden, and looking out across the decadently decorated dance floor congregation from the balcony made my heart smile… it is summer, it is warm, we are alive and everyone appeared so pleased with themselves and their chums.. a swaying surge of high fives, kisses, hugs and squeals. Afterwards a familiar boisterous blast from my early teenage years suckered me into The Quarry for DJ Luck & MC Neat, which found me a confused and cringy yet, strangely smug ninny singing along as if I were 13 again, those early high school angsts somehow returning through the vibrations… It was time for bed, I was done in.

Saturday brunch was a huge golden Yorkshire pudding filled with mashed potatoes with crispy edged hog and gloopy gravy, where we were sat beneath a radiant half rainbow. Foddered up, I danced off the stodge with Sinai Sound System in between an almost awkward tapestry of Fila, Kappa, Champion and ‘ironic’ brand tees teamed with the tinted John Lennon style specs and Nike tube socks paired with sandals or brogues or any other ludicrous foot wear being ‘on trend’ in the increasingly wacky Shoreditch hipster movement, however, where I would look incredibly moronic in said attire, despite being from the era which dictated such labels as ‘street’ and ‘edgy’ – these minors seemed to be pulling it right off. They were having fun with it… Seasick Steve was as usual superb. My beautiful companion insisted we ‘get involved’ and so we had our faces glittered up, and had a splendid stomp, shake, rattle and roll to some excellent nostalgic grooves in Flamingo Jacks alongside a party of snazzy suited swarms. Flitting between the various tents was exhaustingly spectacular and we settled in to an uplifting bouncy 90s vibe and danced until  we could no more. Then drizzle.

Monsoon Sunday sorted the wheat from the chaff and boy did those clouds let loose. For only the second time in my life I actually saw the deluge streaming affront of me, rivers in the air! But it was glorious raindrops! Shimmering sheets of heavy fish scale splattered off our rosy cheeks as the overlords watered their delirious children. Jamiroquai should have come back out. We waited, and waited, along with fellow sodden diehards, we danced defiantly, we ate gluttonously, I mean, who can pass by on a duck fat roasties stall, serving as such, with toppings as cheese and gravy? It was with a contented soul I left this soggy alcove.

If you’re still contemplating whether or not to attend, all I can say is, Y Not?

Published on 01 August 2018 by Magenta Edwards