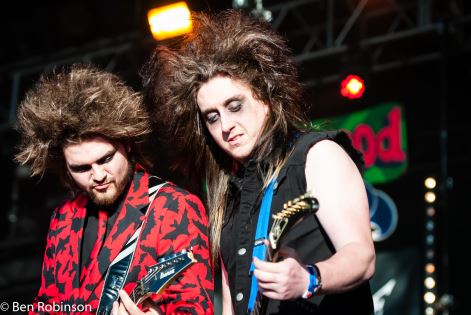 Wychwood Festival turned 11 this year at Cheltenham racecourse and proved a huge hit with thousands of families, who flocked to take in the entertainment over the weekend. The line up was diverse and catered to all tastes, with the main acts being UB40, Boney M, The Proclaimers, The Undertones, Ladysmith Black Mambazo, Dreadzone, Doctor & The Medics and an acoustic performance from The Wonderstuff.

People were raving about the set from Doctor & The Medics especially, as they rocked out on Sunday night. The frontman, Clive, explained how important playing Festivals are to the band.

“They encapsulate everything we stand for. Getting people together in unique surroundings and leaving your troubles behind in the real world at the gate. The ripples of happiness spread far beyond the boundaries of the field and the confines of the weekend and permeate happiness into our lives and communities. I can’t over state how important a contribution they make to our lives and well being. As a result, the buzz we get from playing a festival is second to none. Wychwood is no exception. The welcome was wonderful and from the off it was obvious that the crowd singing along in such a nice setting it was perfect. Thank you Wychwood. Hope to see you again soon”

Despite the rain and wind, the spirits were high and many opted to camp in the fields, overlooking the beautiful Cotswold countryside. There was a relaxed, safe, care free feel in the air, which I’ve found is often the case in the smaller festivals. It’s somewhere you could spend the whole weekend yet still find new possibilities around every corner.

What really stood out for me this year was the quality of the local acts. Stroud based band ‘The Outcast Band’ had an edge to them that can rarely be found. The fiddle player in particular was magnificently talented and they captured the sound of the Waterboys while keeping their originality. They thoroughly enjoyed their performance and said “Wychwood is a great family festival and one of the highlights of our summer every time we play. Always such a receptive and appreciative audience” I’m so pleased these guys are local, I’m going to get to one of their gigs soon to get me some more!

After spotting a crowd of people in hysterics, I peered in to the merchandise tent to see what was tickling them, only to find a lovely trio by the name of ‘Folk On’. Hailing from a little town which sounds like it probably could be hidden in the Cotswolds somewhere, ‘Little Dribblepatch’. Derek, Donald and Edmund were hilarious and delighted the audience with their harmonious comedy folk tunes, my favourite being ‘Hug it out’.

The Hobgoblin stage is a treasure at Wychwood, where you’re guaranteed to discover a new band that you’ll fall in love with. This year I found a gem. Two American brothers called Kevin and Sean Duggan. Together they’re called Loud Mountains. For just two guys on stage, the sound they created was so powerful and their voices complimented each other creating a harmonious, Americana pop sound. Their catchy songs have generated a lot of interest from BBC Introducing and I hope they’ll return to Wychwood next year.

Outside the Hobgoblin stage is an array of workshops, story telling, places to discover, learn and play. A good old fashioned puppet show made little ones laugh while adjacent to this, a wardrobe ‘of infinite possibilities’ made others look ridiculous (and fabulous.) Prizes went to those in fancy dress this year and there were some excellent looks spotted. Grown men with bright tails walked alongside three year olds with luminous pink Mohawks and eyeliner. To add to the magic, there was a Mad Hatter’s Tea Party in the book tent where you could meet the characters, decorate a cake and hear the famous story of Alice in Wonderland.

Sunday opened with an appearance from Mr Tumble. Hangovers were soon shattered while a chorus of children were singing along to ‘Head shoulders knees and toes’ and the well known tunes from his show. The backing dancers were fantastic as they gave a high energy performance, ending in a rainbow of confetti and cheering.

Craig Charles once again stormed the Big Top. It looked like a mass pilgrimage watching everyone making their way to watch his set. Every year, the big top is full of fans as he fills the air with the power of funk and soul. Everyone was dancing, it was two hours of pure joy. I love how Craig gets so into the music and you can tell he loves the reaction of the crowd, but he’s in his own funky world up there on his decks. An absolute pro, he’s the highlight of the festival for me and many others. I hope he’ll be back next year.

A more mellow approach closed the wonderful festival this year, with Ladysmith Black Mambazo. As the sun set, their beautiful calm and uplifting voices set a feeling of peace and tranquillity amongst the crowd. It was the most beautiful end to a magical weekend.

Thank you Wychwood, see you all again next time!