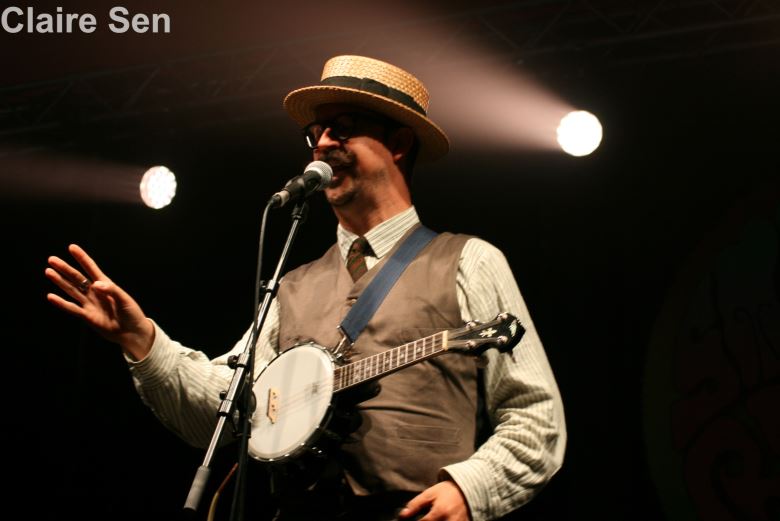 The magical Wychwood festival returned to Cheltenham at the racecourse and proved to be the best Wychwood I’ve ever been to.  It was absolutely rammed full of people of all ages, acts for all tastes, comedy, food from around the world and so many workshops that you’d need a whole weekend just to take part in them all.

The friendly lively atmosphere made it feel as though you were being transported in to a different world, full of colour and joy and amazing music. Why can’t Wycwhood last all year?

I spoke to Jem Watts, who runs the workshops at Wychwood. Jem is a professional performer and event manager and first brought his expertise to Wychwood 12 years ago. He explained how the workshops are for all ages, there’s ‘Tatty Bumpkin Yoga’ and shows for ages 2+, family activities, school age children and things just for the adults too. There’s no charge for the sessions, a nominal pound or two for a couple of the craft workshops for materials and that’s about it, so it’s a fantastic opportunity for everyone. Some of the workshops included belly dancing (and steam punk belly dance), circus skills, poetry performance, a scratch gospel choir, samba drumming, ukulele lessons, break dancing, lyric writing and clay modelling.

The line up this year was very impressive, with the Waterboys headlining on the Friday night. What an experience that was! Paul the keyboard player was hilarious, pounding the keys like animal from Sesame Street with a big grin on his face throughout the entire set. I couldn’t stop laughing. Everyone sang along to ‘Whole of the Moon’ and ‘Fishermans Blues’ and it was exciting to hear their new music too. The current line up of the band come from all over the world, from Tennessee, Alabama, Dublin..They’re all so talented, solid musicians. It was a privilege to see them play live.

Just before the Waterboys were the Scottish indie legends, Idlewild.  Roddy Woomble played a solo set a few years ago and Wychwood welcomed him and the band back with open arms.

On Saturday, I learned something that excited me greatly. Matt Berry (THE best comedy voice of all time) has a band. Not just that either. It’s a really good band. Matt Berry and the Maypoles are psychedelic. Matt plays guitar and a Korg synthesizer and has a really impressive voice. One track that really stood out to me was ‘Solstice’ which involved a bit of freestyling and some really beautifully put together arrangements. He even did the theme from ‘Toast’ which delighted everyone immensely.

Edd Donovan was back, to my delight. I caught his afternoon performance on the Hobgoblin Stage and it was beautiful. I’ve been a fan of Edd’s for many years so I always look forward to seeing him live. The songs are comforting, uplifting and heartfelt. With a new album ‘Making Mountains (Vol .1)’ just released, Edd and the Wandering Moles performed some new tracks which included expansive arrangements and instrumentation. I overheard one member of the audience saying that this was the best performance of the festival so I’m pretty sure it’s certain that Edd will be back next year.

Mr B The Gentleman Rhymer caught my attention on Twitter before the festival began, as his ‘chap-esque’ appearance and his extremely gentlemanly manner was just charming. I had no idea how unbelievably talented this man was until I saw him perform in the big top. He can really rap. With a banjo too! Waiting for him to grace the stage at the big top, the kids behind me were getting really impatient, rattling the rails and I have to say I was very excited too.  In walked a very sophisticated well spoken chap who politely introduced himself. Then the beat dropped. Wow. I could not believe it! Mr B would win a rap battle with any hardcore rapper… if they gave him the chance. The lyrics are tweaked to well loved beats such as ‘Baby Got Back’. Instead of rapping about ‘back’, Mr B rhymes about issues more relevant to him such as the importance of voting.  It is one of the funniest performances I’ve ever seen, especially the ‘Chap Hop History’. This wasn’t his first gig at Wychwood and I hope he comes back regularly. It was lovely to hear that Wychwood holds a very special place in his heart as one of the first proper festival gigs he performed at.

There are so many acts I could write about – I just picked a few. Craig Charles, Miss Dynamite (who had a load of children dancing on stage which was so lovely!), Bill Bailey (Everyone on twitter are now talking about what a great performance this was) and 10cc were all just so fantastic as were all the other bands who played across all the stages. The comedy was hilarious, especially Jay Foreman.  The atmosphere across the whole weekend was so friendly and laid back. It’s an event for all the family with excellent facilities. Cheltenham’s also a perfect location being between London and Birmingham. So you have no excuse now! Go, go, go! Book your tickets for next year NOW!