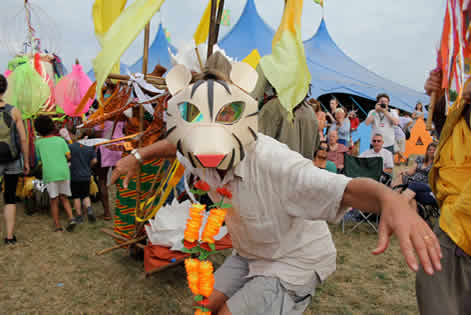 Our arrival on Friday morning was greeted by the sounds of people busily putting the finishing touches on the magnificent stalls, stages and structures around the site and the excited festival goers milling around with their camping gear ready to find their spot for their temporary home for the weekend. We began by exploring the entire arena and surrounding areas before deciding where to set up our own little camp.
It was my first time at WOMAD and right from the start I could tell it was a festival like no other. Every part of it had an exciting yet relaxed, unique atmosphere and energy about it. WOMAD festival is an amazing fusion of the planets music, art and dance. It is a safe, free spirited, laid-back family affair with a really welcoming community spirit. It is now in its twenty-ninth year of festivities and it’s fifth year at the beautifully situated Charlton Park. The site is just the right size, with a good amount of people too. There are five main stages, the Carter’s steam fair and several areas such as The World of Wellbeing, situated near the BBC Radio 3 stage, The World of Kids and the Roots Architecture where over the course of the festival with the help of volunteers they built four structures using reclaimed materials from Charlton Park. It’s a festival where everyone can get involved.
Unlike many other festivals, which I feel are becoming more and more commercial by the year, WOMAD is a festival that doesn’t take its self too seriously and has a refreshingly non-commercial side which shines out from the ever expanding UK Festival scene. It is not in anyway a try-hard festival or a fashion parade. People of all ages and origin are there for the whole fun experience of celebration, discovery and a taste of what the world has to offer.

The first day was spent going from act to act trying to see as much as we could. Near the end of the night, and from then on, we decided to just go with the flow and relax and enjoy the experience. The festival seemed to have a happy, no worries effect on everyone.
The festivities kicked off on Friday with Jazz Jamaica playing a lively act on the Open Air Stage. We then moved on to the Siam stage to watch The Gotipuas, who are young dancers and acrobats from Orissa, India, accompanied by sacred traditional music. Their bodies moved in extraordinary ways. Contorting into different shapes, balancing each other on their stomachs and shoulders and dancing with both rigid and fluid movements. The dance was extremely complex and the individual characters and personalities of each dancer shone through. The audience was transfixed, not wanting to look away and miss a second of it.  The spectacular show made up for the fact that there weren’t many dance performers in this years line-up.  We then made our way over to the intimate BBC Radio 3 stage, which was probably my favourite stage, to watch Jamie Smith’s Mabon, a great mix of Folk and Celtic music with influences from over seas. Later that evening in the Big Red Tent we watched The Boxettes, an all female beatboxing quartet, and Dub Pistols, who had such great stage presence and played some brilliant mashed-up remixes.

Saturday arrived with a hazy warm start. Crawling out of the tent and taking a morning stroll it seemed like the whole site was alive with wildlife as well as spirit, atmosphere and people from all over the globe all happily living together. Cabbage White Butterflies flitted about, pink and white trumpet shaped Morning Glory flowers grew all over our campsite and a variety of insects decided to take up residence in and around our tent. I found the campsites were well worth a wander around. There were a variety of tipis, vans, trailers, huts and beautifully decorated tents of all sizes. People had really made themselves at home, some going to huge efforts. Several around us had erected large canopies over huge tables with fairy lights, lanterns, colourful tablecloths and huge feasts in front of their tents. They were considerably more prepared than us.
Saturday was a relaxing day and we drifted from stage to stage and also enjoyed the delights of the different areas and art. We listened to the Mercury Prize nominated Susheela Raman, the energetic Axel Krygier, the Japanese blues men Shunsuke Kimura x Etsuro Ono and the massively loud and entertaining Nextmen who had the entire Big Red Tent dancing. We also decided to go and watch the drumming and rhythm workshops, see what crafts the kids had produced in The World of Kids and explore the film animations in the sea containers at the Giving Soul project. William Kentridge’s powerful and poetic charcoal animation was inspiring.
We visited the Recycling point next to the San Frans Disco DJ Bar. Womad was one of the cleanest and greenest festivals I’ve ever been to, even the program was made out of recycled paper. At the recycling point they show the weekends accumulated rubbish in full view to demonstrate how it was recycled and how much waste we produce. The usual cup deposit was in full swing with armies of children scampering around on the hunt for used plastic cups and there wasn’t a piece of plastic cutlery in sight.
On Sunday we saw a good variety of acts including the Dhols of Jaipur who were the loudest drummers I’ve ever seen and Feufollet who are a Cajun band with a little added indie rock. Womad proved that the music really had come from the far corners of the earth when Ayarkhaan from the Sakha Republic in the Arctic Circle played their eerie, otherworldly music on the BBC Radio 3 stage, which was the perfect setting amongst the trees.
Over the course of the festival we had tried some of the food on site whilst also making our own to save a bit of money. On Sunday we decided to loosen the purse strings and have a feast. There really was so much choice! We kept an eye on what other people were eating to get an idea of where the best food stalls were. Festival food can sometimes be a bit costly and a little dodgy, what it says of the label is not always what you get on your paper plate. Cooking in a field is difficult and must be produced fast to meet the high demands so can sometimes lose its quality. Womad’s food often reflected the whole ethos of the festival. Like the musicians, artists and dancers, it was from all corners of the globe as well as some great local produce. There was everything from the usual festival food to local organic food, crunchy on the outside falafel, wood fire pizzas, Mexican burritos, local ice cream, freshly squeeze lemonade, good old fish and chips and our feast of choice Creole calypso chicken with rice and peas.  We enjoyed our meal by happily finding a spot in the World of Wellbeing and lazily lying down and listening to all the different music and sounds that drifted our way through the trees.
Some of the most enjoyable acts were often the least expected. One of my favourite acts was the ever so polite Chapelier Fou who is a one-man band from France playing in the evening on the Charlie Gillett Stage. His amazing digital synth and electronica sounds combined with beautifully played classical violin which had been artfully looped to build up a magnificent sound made this one-man band stand out for me. He is obviously extremely talented but also you could tell how much the music meant to him by the passion in the way he moved and in his facial expressions. As he played we were lucky enough to have a perfect sunset to end the festival on. The ever-popular gypsy-punk Gogol Bordello closed the festivities with a huge set and crowd which was overflowing with energy.
Womad really was a brilliant festival and such a pleasure to be part of. As a photographer it was an amazing experience in itself to be able to photograph such a colourful, fun, friendly and diverse festival. There is no doubt that I will be returning next year. Womad truly is a delight for all the senses and, for me, was a festival of great discovery.

Published on 03 August 2011 by Alexandrawalters