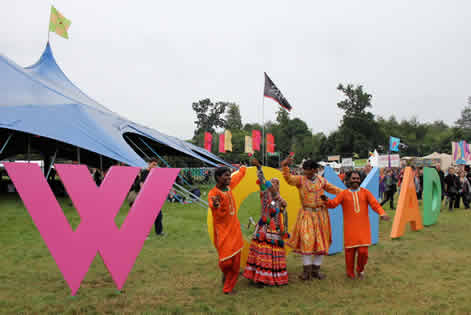 The last weekend of July in what has been a decidedly uninspiring summer turned out to be a scorcher. The Friday night was hot and humid and the many colourful flags of Womad were fluttering lightly in a breeze high above a sea of family sized tents.
From the Siam tent came the sounds of UK-Ethiopian band Dub-Colossus, a heady mix of jazz, reggae and Jamaican dub elements that combined for a thoroughly enjoyable listen. Earlier in day on the wooded BBC Radio 3 stage Jamie Smith’s Mabon played a very tight collection of Celtic songs to a varied audience ranging from seasoned festivalgoers to first timers. The music played by the band and the inspiring vigor of the front man Jamie Smith meant that by the last song a large number of the crowd were on their feet dancing and free of inhibition. For me this epitomised the free spirited openness of the festival, something which in a summer littered with festivals has undoubtedly insured that Womad succeeded this year after some of the layout problems they had with last years festival (I must hasten to add that I thought this year the festival was impeccably laid out).
Womad this year had 35,000 people attending, a 29% increase on last years sales. Although Charlton Park is a relatively small setting the stages never felt crowded and throughout it retained a good atmosphere. It was easy to find your own personal space and yet you always had the sense that you were part of the collective group. At the heart of Womad is the wooded area in the centre of the festival which is home to the BBC Radio 3 and Taste the World stages (the second of which offers live cooking shows) and the ‘World of Wellbeing’ a place for the tired and weary to come renew themselves with massages, Reiki, gong baths and many other spiritual and physical therapies. At night this area was entrancing to walk around, the organisers did a great job of atmospheric lighting with certain trees lit up and subtle highlights of colour. Even at night after the arena shuts music is never far away, walking past some of the many cafés you can hear acoustic music serenading the late night eaters. Unlike some other festivals the nightlife is not raucous, walking round the campsite at night there weren’t many parties kicking off and to many young festivalgoers this may be a drawback but it also must play a part in why Womad attracts such a large number of families.
My camping experience at Womad was very pleasant, my girlfriend and I turned up with little more than a small two-man tent and the clothes on our backs. We ended up pitching not far from the main arena amidst several very well equipped families all of whom were more than happy to oblige us when we ended up having to ask them for such camping formalities as a bottle opener or a knife. I cannot say if our camping experience was the norm but it certainly seemed as though everyone we met at the festival was just as accommodating and pleasant as the people we shared our camping vicinity with. The facilities at the campsite were all very well maintained, the toilets were generally clean (how clean does a portaloo ever get?) and if you didn’t think you could face the prospect of a portaloo then there was always the option of the La-Di-Da Loos which boasted porcelain toilets, hot and cold running water and luxury soap all for two pounds per visit or eight pounds for a weekend pass.
The eclectic mix of musical styles coupled with the amazing range of different nations represented at Womad mean that it does justify its tag line ’The World’s festival’. On Saturday afternoon the music ranged from the unhurried traditional Tamil vocals of Mercury short listed Susheela Raman to the Japanese blues played by Shunsuke Kimnura x Etsuro Ono an inherently bluesy music made unique by the three stringed Tsugaru-shamisen. Saturday night gave a chance for some of the people who felt they were missing out on their weekends clubbing to rave to the mixings of the Nextmen and MC Wrec who mixed a variety of popular music from Adele to the Prodigy with samplings of their own music covering genres from hip-hop to dubstep.
The range of nations represented at Womad is not only in the field of music; the food at the festival is equally diverse. There really is something for everyone; a particular highlight of mine was a stall that served up very healthy portions of Caribbean food. Food envy was rife though and we did end up spending considerable periods of time eyeing up what other people were eating and deliberating about what to spend our money on. There are all of your stock festival foods such as noodles and pizzas but in my personal experience I have never been to a festival with such a variety of appetising food.
Sunday night we chanced seeing one man band Chapelier Fou (Mad Hatter in French), I went with ideas of something vaguely comical with one man struggling about stage laden with any number of whistles, bells and a bass drum. Instead on stage was a quiet, polite and humble man who used incredible skill and timing to overlap electronic beats whilst playing violin or electric guitar, the resulting sound was an ethereal version of electronica. Headlining Sunday on the open air stage was Gogol Bordello who attracted one of the largest followings of the festival. The gypsy punk octet performed an upbeat typically punk performance that allowed their many fans to close out the festival in the best possible fashion. The band themselves were a suitable act to close out the open air stage, their cover of NME shows that world music can transcend the supposed barriers against it’s popularity and so can Womad festival, which it does through it’s open and unpretentious nature.

Published on 03 August 2011 by samueljudge