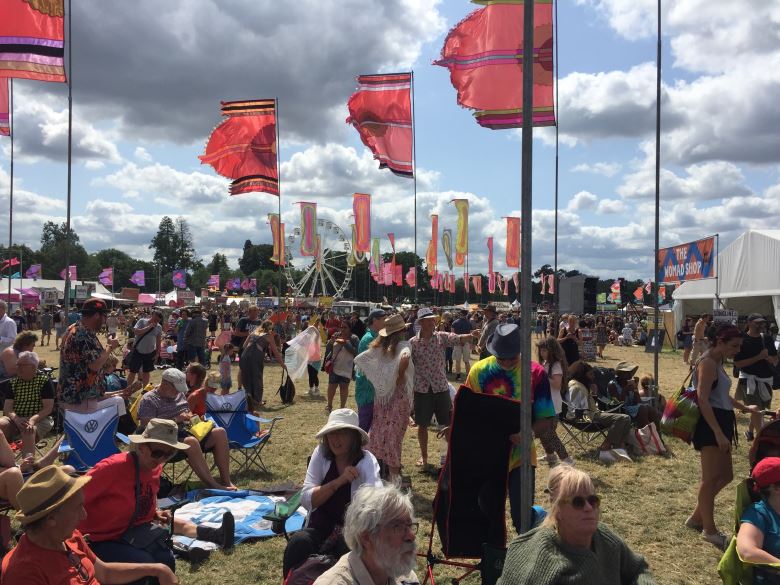 Dear God, Father Christmas, Tooth Fairy, Laughing Gnome, please get me along to Womad again next year! What a blast it was. As I’d been longing to attend for a decade or more I half – if not three-quarters – anticipated my sky-high expectations to come crashing ingloriously to the ground, but not a bit of it. Indeed, if I were to create a blueprint of the perfect festival for me this would pretty much be it.

Jeez, I’m sounding just a little bit too fawning for my own good. In truth Womad 2019 wasn’t perfect, but it was bloody brilliant, if not some way beyond it. And my right-on-it teenage daughter thought so too, so rest assured these are not just the incoherent rantings of a mid-life born-again nouveau age hippy.

I don’t think I have ever been to a more genuinely feet-on-the-ground friendly festival, and I’ve been to a great many excellent festivals over the years. Other than a single 4.30am, er, lively disagreement with my daughter (well she is 19 and I am not sure how exactly to manage errant teenage hedonism in something approaching an adult way – I rather suspect I should just chill out and let her get on with it) there was a ubiquitous sense of good feeling throughout the whole long weekend and, dare I say it, plenty of love and peace and getting politely out of it. In fact, and this is something I’ve never tangibly experienced at a festival before, I felt respected by the organisers, as if they cared for us attendees in a heartfelt way, that the festival was given as a gift for us to enjoy. Enough already. Pass the bucket?

At its heart Womad is, of course, about music. It’s a cliché – too often sadly untrue – that music is much better live, but with world music this appears to be the absolute reality. We stumbled upon performance after performance on Womad’s numerous stages over the weekend of artists that we’d never heard of from all over the place who were simply amazing. Wandering aimlessly around the beautifully laid out festival site (it’s set in the extensive grounds of a Bertie Wooster-esque country pile) was a total joy, a visual/audio dreamland, an around-the-world-in-four-days adventure without having to desert this lovely corner of bucolic Wiltshire. Our carbon footprint was nil.

There were far too many outstanding performances to list them all here, but I feel compelled to mention the oh-so-romantic sounding vocals of Anandi Bhattacharya from India, the utterly charming Les Filles de Illighadad from Niger, the super cool Vaudau Game from Togo, the mindbogglingly entertaining Turkish psychedilia – yes it’s a genre! – band BaBa Zula, the quite astoundingly brilliant 79 year old Calypso Rose from Tobago (how come I’d never heard of her?), and the simply mermerisingly speechless-making DakhaBrakha, whose live act was up there amongst the best I’ve ever seen.

We were also blessed by the weather. After the hottest Thursday on record (it was such fun lugging our heavy tents etc 500 metres or so uphill to the camping area in 37c heat) things cooled down a little, but the rain that threatened never appeared, other than a few small drops. I suppose a deluge could have ruined things somewhat, but it would have taken a lot to spoil them completely.

The site, as mentioned, was beautifully set out, with colourful flags everywhere and all sorts of hidden nooks and crannies to explore – not least more than one fantastic children’s area, a well organised literary corner, an excellent healing area (Pyramidal Memories Transmutation anyone?), a physics area (not sure why it was there, but it was good), the often very interesting discussion and music Ecotricity Stage (the Extinction Rebellion and veganism/vegetarianism discussions were particularly thought provoking), good facilities for disabled attendees (there were more disabled people around and about than I’ve seen before at a festival), and all sorts of other entrancing bits and pieces, not least a feast of live music stages and dance areas. In fact one complaint I have is that there was so much of interest to do and see my FOMO – pretty severe at the best of times – went into overdrive. I just couldn’t do everything. Arghhhhhhhh!

Notably there was no feeling of Womad having sold out, which arguably isn’t true of a number of other well-established festivals. The clothes, jewellery and various hippy knick-knack shops were generally reasonably priced and well stocked, indeed they were sometimes cheap, and the food retailers were largely excellent and averagely priced. Best of all there were loads of charity and NGO stalls – Tibetan Relief, Action Village India, ShelterBox, Oxfam, Greenpeace, Extinction Rebellion and a great many more – which made me feel (and I hope and suspect it’s true) that Womad is supporting their urgently needed work in a significant way. Also hugely importantly 😀 , and very unusually in my experience, the bars didn’t all serve exactly the same selection of drinks, which made for excellent, hic, exploration.

Now I have to be a little bit critical. While the camping areas were the most extensive I’ve seen at a festival, which was fantastic as there was plenty of space for each tent, there was the usual shortage of loos and especially of showers and standing water taps. We had a great camping space, with metres of open grass around us, but it was about five, if not ten, minutes walk to the nearest loos and water tap. Too far. And the showers, the few there were, were somewhere in the far distance, over the rainbow, and horrifyingly we rarely could be bothered to trudge our way over to them. Hmmm, thinking about it, no wonder there was so much space around our tents.

But hey, I’m griping. As my daughter said as we were leaving, Womad gave her a feeling of freedom and was full of her kind of people. I’m not entirely sure what she meant by the latter, she’s from Forest Row so it probably means middle class hippies, but in truth the spread of types was greater than that; left leaning and liberal for sure, tolerant and inclusive definitely, and an excellent representation of all age groups. And there was plenty on offer for all of them. There could have been a greater ethnic mix, especially considering the diversity of the performers, but in the end it’s who chooses to attend. All said and done Womad is a brilliant festival. Go. I certainly intend to return next year, inshallah.