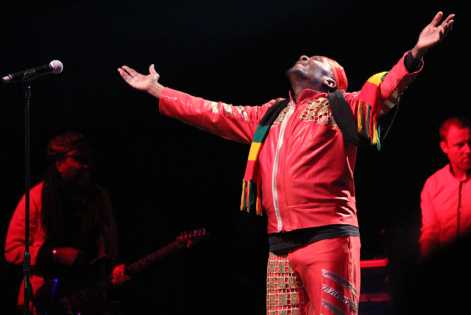 In the great summer of British patriotism Womad festival celebrates its 30th year (and 5th at the Charlton Park venue) alongside the Queen’s Diamond Jubilee and the London Olympic games. Given the clash of dates with the world’s biggest and most elaborate sporting event the festival, as one would expect, plays second fiddle despite championing many of the same ideals and a very admirable ethos. Over the three decades since its conception Womad has brought together a myriad of different cultures and musical styles from across the globe; the resulting effect being an explosion of colour and sound, a real barrage on the senses (albeit a rather chilled out one).

Due to the atrocious and ‘unseasonal’ weather Womad is perhaps the first festival of 2012 to enjoy bright, sunny and mostly warm weather, casting aside the 2007 nickname ‘Womud’. With reggae legend Jimmy Cliff headlining the Friday night and the strong afro-beat heritage of Femi Kuti on the Saturday the weather was a good omen heralding the sounds of sunnier climes to the heart of the Wiltshire countryside. As Danny Boyle welcomed foreign ambassadors with a depiction of a picturesque and idealised version of rural Britain Charlton Park acted as its real-life counterpart. The green and leafy venue was a fine backdrop to a well seasoned, charismatic performance from Jimmy Cliff who played a wide selection of much loved reggae classics to an eclectic and receptive crowd. Saturday saw the ever flamboyant Patrick Wolf in a toned down, almost sombre, black ensemble with flowers blooming from his lapel. Although this reviewer had hoped to see the ostentatious attire of old, Wolf gave a solid performance with the emphasis placed on the artist’s musical ability, solid song writing and amazing proficiency with numerous and often atypical instruments. On Saturday night Femi Kuti gave an exuberant and dynamic performance accompanied by some truly 'bootylicious' dancing from his accompanying ladies. Throughout the festival the music in the Big Red Tent provided the large contingent of younger festival goers with more contemporary music and a place to escape the watchful gazes of mum and dad for a couple of hours. The typical Womad youngster carries the persona of being cultured and worldly (a persona undoubtedly helped by worldly and cultured parents who offer up to their children the freedom and enriching experiences of festivals such as Womad). The music booming from the Big Red Tent was cleverly chosen to reflect this cultured nature with artists such as the Portico Quartet showing how classical musical ability can translate to a modern, bass laden, electronic/ambient sound. Sunday evening came and the obligatory rain showers of the morning were gone leaving a brisk summer's breeze and an over-flowing Siam tent for the much loved Buena Vista Social Club. Such a healthy gathering is testimony to the staying power of good music and not solely that which is driven mercilessly by the media. The band itself has gone through many changes in the past decade or so due to members sadly passing away but the current line up played with sufficient enthusiasm and joy to do the name justice. Of course, Robert Plant, 'the greatest voice in rock' and Charlton Park's Sunday night headliner was always going to steal the show and did so in typical fashion justifying his many accolades (most of which include a superlative).

Despite the huge variety of music on offer at Womad the festival is far more than just a sum of its orchestral parts; it also boasts many distractions away from the five main music stages. The arboretum separating the main camp-site from the music arena plays home to all manner of pleasing sidelines and stalls to help you relax and recover, either from the stress of everyday living or from the self-induced woes of a festival hangover. The 'World of Well Being' caters for such needs with numerous stalls nestled amongst the trees offering therapeutic massages, reiki, hammocks for hire or just simply somewhere pleasant to sit and have a cup of tea and a piece of cake. Womad is a brilliant festival for families and there is a large area for children of all ages with many arts and crafts distractions and workshops, some of which are even carried out by the performing artists. These artistic endeavours then build towards the Sunday afternoon procession where the children get to show off their creations and parade them around the festival grounds. All of this goes towards creating an extremely friendly and safe feeling festival that is ideal for any parent wishing to introduce their child to the nomadic experience of festival going.

Womad is an ideal festival for young families trying to induct their children into a summer tradition that is becoming increasingly popular; the vast array of music on offer (and the quality of said music) also means that the festival will appeal to any well travelled festival goer looking for something a little more off-beat to spark their musical interests. Charlton Park itself is a good venue that never feels overcrowded, everything is accessible and the facilities are well maintained. Above all Womad is a festival that is entirely unpretentious, safe, friendly and a great way to spend a summer weekend.

Published on 31 July 2012 by Alexandrawalters