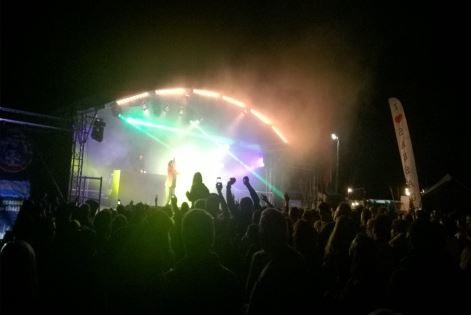 Outdoor sofas, tipis and a whole hill jumping to the sounds of Ms Dynamite (tee-hee) at Wilkestock 2014; an intimate grass roots party with a family friendly-side where all proceeds go to charity. One of the first things I noticed about Wilkestock when entering the site for the first time was despite not being the biggest festival in the world everything looked impressive; the main stage, the lighting, décor, and the value-for-money diverse line up.
Musical highlights included old school hip hop duo Too Many T’s who bought the party to Saturday night and got the crowd from chilling at the top of the hill to dancing at the front with a setlist that consisted of short bursts of tunes and charisma backed up by the bouncing beats from DJ Savage Henry on the decks. Another favourite with the Wilkestock crowd was Ms Dynamite’s all killer, no filler headline set. She opened with Dy-Na-Mi-Tee and from that moment onwards everyone in the whole field was engaged and dancing – young and old. One last line-up highlight was self-proclaimed drunk folk singer Beans On Toast’s intimate Friday night spontaneous set where he returned to Wilkestock for the 3rd year running on top form as ever. Sadly I had to leave on Sunday morning but the rest of the line up included Nizlopi of ‘JCB Song’ fame and legendary local Chas (Chas & Dave).
As the main stage closed Wilkestockers danced till 3am in many different venues. There was even a hidden corridor which led to a secret late-night stage where a DJ played in a lift-tower that moved a long with the visual screens. Having a secret venue at a festival of this size creates a multi-experience for each punter that other small festivals can struggle with.
During the day there was a ‘Rock Up + Rinse’ tent that backed onto the chill out tipi. This meant that any Wilkestocker could impomptu-ly take the stage.
Although the festival was family-friendly there weren’t many things for children to do. My 10 year-old sister did however spend the whole of Saturday in cinema tent which showed family (and occasionally very cheesy) favourites such as Despicable Me, The Muppets, Frozen and more. There was also lots of space for kids to run around which is always great if you are going to a festival as a family.
If I could change one thing about Wilkestock it would be the security team who were a bit over enthusiastic to the point that they took people off each other’s shoulders even though they weren’t creating any extra danger than you would get at a usual festival or gig.
All in all Wilkestock was a chilled yet party weekend full of great music, dancing and even clean toilets! It’s amazing what a small dedicated team can pull off for such a small event. And it’s all in the name of charity – what more could you want? Get your tickets for 2015 as soon as you can because if this year was anything to go by it’s going to be a cracker!

Published on 01 September 2014 by Ned Mansfield