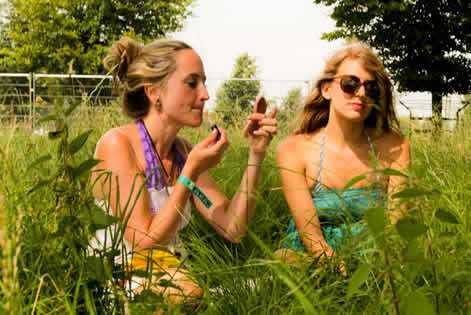 The forecast was for the finest weekend of weather the summer had seen so far, meaning wellies were left in the cupboard under stairs. Instead of rainmacs and woolly jumpers, we packed bikinis, flip flops and a wide array of novelty sunglasses. Not to mention the fancy dress requirements; Friday called for 1920s trilby hats for the men and flappers ‘n’ feathers for the women, while on Saturday everyone was to adorn a mask before Sunday’s tribal finale.

The dress code was precise. And a group of people wandering around on Saturday’s night with Red Indian headdresses making the war whoop were scorned. “Tribal is tomorrow, did they not get the memo?” we smirked, as we rearranged our gold and feather masks.

Not complete with the best of British weather, daytimes also saw our finest British sport, cricket (in which we are world champions) being played out on a lush grass green courtesy of the Bearded Kittens. Sporting full whites and the odd pink tutu, the Wilderness Eleven battled it out with the Gentleman Wallaps. Complete with a flamboyantly plumy commentator, with vowels like elastic bands that snapped back for the consonants, the tensions were high. Relinquished only when the umpire frequently staggered the game to a stop so he could get a quick refill of whisky. By Jove, there were even free glasses of ice cold Pimms and cucumber sandwiches for spectators.

The festival, in only its second year, also brought in the top chefs from Britain’s most successful restaurants; Yottam Ottolenghi from his eponymously named delis, Fergus Henderson from St John’s at Smithfields and Sam and Sam Clark from Moro. In the form of pre-booked long table banquets, the meals offered festival foodies opulent culinary delights and the opportunity to socialise with woodland nymphs, a family of badgers and a pirate adorning a pink wig.

In keeping with his ‘nose-to-tail eating’ philosophy, Henderson served grilled ox heart and roast quails. And for the vegetarians? Lentils, of course. While Ottolenghi treated his guests to his trademark meze fragranced with rose, harrissa, cardoman and chervil. Our group opted for the Moro banquet held in an Arabian souk tent. From tables scattered with petals we enjoyed five courses of their finest Middle Eastern and Moorish cuisine. Moscatel marinated English strawberries were the perfect light finish that brought us back down to our English countryside venue.

Already renowned for being ‘the foodiest festival of them all’ the self-proclaimed ‘celebration of the Arts and Outdoors in the wilds of England’ is a smorgasboard of delights. Executed by the untouchable Secret Party Productions, who are miles ahead of their competitors in delivering event perfection year after year. This is now their third festival in the season, and one that won Best New Festival at the festival awards last year (one of the three categories they topped that year alone).

Held in the beautiful Cornbury Park, a private estate home to Lord and Lady Rotherwick in the heart of Oxfordshire. The elegant 17th century house is surrounded by forest, lakes, and farmland, and the sound of peacocks cries often filled the air. There is also a waterfall, where sun worshippers could cool off and dirty festivallers could clean off; the perfect refreshment during a weekend where temperatures soared into the low 30s Celsius, making Britain hotter than Barbados.

It was once the sun went down that the late night parties erupted. Friday night saw a screening of Bugsy Malone as part of a new partnership with Secret Cinema. Gangster molls and suits with braces ran amok around the giant screening, each wielding a wildly spluttering splurge gun and spouting memorable quotes in somewhat questionable New York drawls. Poifect.

Saturday saw the secret masked ball, organised by the Old Vic Tunnels, and on Sunday the Secret Garden Party held their Rise of the Tribes party. At night, a genteel affair the festival was not, and everyone’s sequined party shoes sure got their fair share of stomping around to some brutal beats. Yet the strict 2am curfew left many of the hardened SGP fanbase tiptoptapping their restless party feet looking for a place to play.

Wilderness does not intend to cater for musos. It does not even declare itself a music festival. Yet, down at the main stage Rodrigo y Gabriela pulled in a mighty crowd. Renown for their fast and frantic acoustic guitar, the Mexican duo can create entire multileveled songs through combinations of finger plucking, guitar slapping and strumming. Yet, for this occasion, they were supported by a big brass backing band, who sadly, to me, added nothing at all. Aside from cheesy jazzy finishes to what is otherwise a wonderfully unique music style and at other times completely drowning out the guitars so they were inaudible.  I would take a performance of the couple raw and unadulterated any day; they need no support nor backing.

The Temper Trap was a gorgeous and timely performance, incorporating their hugely over excitable synth player (do his fingers not start to ache!?), with some hip swaying beats and the wonderful falsetto of singer Dougy.  The sun was still shining, the mood was infectious and the cheers the loudest.

Goodness, I am running out of space (sorry editor!).  Such a new and small festival, yet so much more to say. I haven’t even touched on the spa, complete with outdoor hot tubs, saunas, champagne bars and even beauticians to massage your aching shoulders or rub your tired feet. Nor have I mentioned the talks on everything from the philosophy of sustainability to one by The School of Life aptly entitled ‘How to stay sane’. Plus there was a literary death match, cookery classes and theatre from the Tax Deductibles and The Factory amongst many others. And I haven’t even mentioned the camels! And then there’s tons for the kiddlewinks, though luckily I don’t have any. So my only experience of these little joys was asking proud parents if I could take a photo of their chocolate ice cream covered tinkerbell as she rolled in the hay.

With the festival boom now a few years back, and so many of these events struggling to sell tickets with some even resorting to last minute cancellations, it seems daring to launch yet another boutique festival. But not when you are Secret Productions, and everything you touch turns to gold. When you are renowned for the finer details, the creative flair, the pockets of mischief or beauty hidden away and to be stumbled upon. The fact that no guest, as punters are called by the organisers, needs a map or a schedule, as wherever and whenever they end up is sure to be a joy where a party promoter extraordinaire will have wholeheartedly put on a celebration of the highest level in which they can revel.

As one friend said to another who asked whether he should go to Wilderness or to another festival on the same weekend (that shall remain nameless): “It depends. Do you want to be sat in a hot tub by a lake under the stars watching a live feed from the surface of mars drinking cocktails getting spoken to by the head astronomer of the royal observatory before eating a Michelin star banquette and then rolling into the woods to a secret masked ball or do you want to take ketamine and listen to glitch hop?”