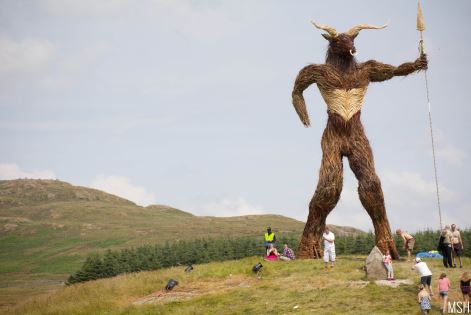 After a week of big clouds & even bigger storms, as the weekend broke, so did the cycle of thunder & lightning, leaving only brazing sunshine & clear blue skies.

Arriving on the Friday, popping the tent up & getting into the arena I was really looking forward to what the line up offered this year, with many quirky acts on the cards for later. In particular the main draw for me was the chance to see Nile Rodgers ft. Chic, as their ideally suited- festival friendly, upbeat 80’s music would no doubt create a wonderful atmospheric buzz which would get the weekend going. Leading up to this moment on the Friday, I looked to see all of what the festival had to offer, not just the main stage (the Summer Isle), & embraced all the smaller tents & alternative performances.

It was quickly time for Chic, one of the most influential acts of the Disco era, who delivered a show stopping performance on the main Summerisle Stage. Led by prolific producer Nile Rodgers, who features on ‘Get Lucky’ the very Recent UK number one single by Daft Punk Single, the disco giants performed a mix of classics such as 'Everybody Dance', 'I Want Your Love', 'Good Times' and 'Le Freak’ alongside tracks from their new album. We went beyond my expectations & were an ideal band to watch the sun begin to set to.

After the generic drinks pit stop & 30 minute gap, Primal Scream made their way on to the main stage to the awaiting crowd, an all time record number just shy of 20,000 people– a Wickerman record in its 12 year history.

Primal Scream were quick to get the crowd going & live up to their hype. Wickerman Festival Coordinator Helen Chalmers had commented prior to the event: ‘Primal Scream is one of Britain’s most iconic, inventive and exciting bands and having them play at Wickerman is a major coup, both for the Festival and its fans.

Once again the full line up will feature an eclectic and sometimes surprising mix of leading artists, alternative acts and exciting emerging talent, so whether its Primal Scream or Public Service Broadcasting stirring up the crowds with sizzling sets, we are certain that Wickerman 2013 will be one of the most relaxed, fun and friendly festivals of the summer!’.

She couldn’t have been more right – this eclectic mix really got the crowd going!

Saturday was thankfully more of the same weather wise. This was a very chilled - relaxed day, with a massive built up to one of the main acts Amy MacDonald, with a massive Scottish audience it was now surprise that she felt right at home. Wearing a floating white dress her presence was really something to be admired, with the whole crowd singing along to “This is the life”. The whole crowd began to swarm toward the Wickerman, standing tall. The anticipation was building, then to everyone’s surprise Amy MacDonald appeared, holding the flame and the whole crowd roared. As she lit the wicker, she was met with huge applause.

The Wickerman shows us yet again, he can provide a quirky and memorable show, right in the heart of Dumfries and Galloway.