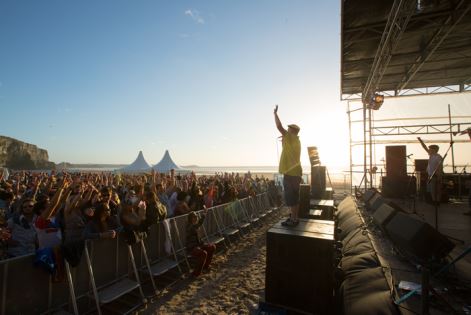 This June, Watergate Bay is set to host the UK’s Greatest Beach Party as O’Neill presents Electric Beach Festival in association with Ion Cameras, an event expanding this year to become one of Cornwall’s premier music and sporting fixtures.
On the 7th and 8th of June the golden sands of Watergate will host acts including Grandmaster Flash, Zion Train, Sam and the Womp, Dizraeli and the Small Gods, Lloyd Yates, The People’s String Foundation and Running Numbers, as well as many others.
What’s more, following a storming set previously, DJ Maseo from De La Soul will be returning to play some all-time classics beneath the Cornish cliffs.
Now in its third year, the Electric Beach Festival has evolved, and will now run over two full days, with camping available nearby for revellers and a ground breaking program of sporting events taking place alongside the music.
Sponsored by O’Neill – this year the festival will see a showcase of the company’s top pro surfers, with tutorials and workshops available for those wishing to hone their skills or take to the waves for the first time.
And, we’re also thrilled to announce the first ever O’Neill Student Surf Masters – the first competition of its kind, which following a thrilling set of knock out heats will see the top eight university teams battle out for the title alongside their very own pro-surfer mentor.
Event organiser Ben Hall says, ‘We are really looking forward to this year’s Electric Beach, we feel that the event has been going from strength to strength and has created a world class beach party that people are incredibly excited to return for. Now we have two days, we can make a lot more use of the beach and having O’Neill on board has meant we can really make the most of the ocean too. The Student Surf Masters is going to be a fantastic addition, with a really fun and friendly competition format that integrates pro surfers into the student teams.’
He added, ‘In terms of acts, we are very pleased to have Grandmaster Flash, who is a truly iconic, internationally renowned performer and never fails to get a party going. We are also very happy to welcome back Dj Maseo who performed with De La Soul at the first ever Electric Beach in 2012 and equally excited to invite back Zion Train who blew the roof off with their performance in 2013. Some of the other acts we have such as Dizraeli and the Small Gods and Sam and the Womp are also a massive attraction to the festival. We have kept ticket prices as low as we can to ensure as many people as possible can enjoy the event, with prices for the whole weekend starting from as little as £27.50 to include both Saturday and Sunday, we don’t believe you can find an event of this standard for a better price...’.