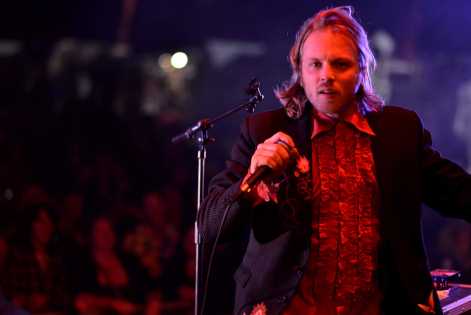 My first thoughts as entered Watchet live 2012 festival were that, on the surface, not much has changed since Watchet live 2011, the lay out of the festival field was pretty much identical, the stages and performance tents were all in the same place, the beer tent was still (much to my delight!) selling the same selection of ales from the Cotleigh brewery as last year and still at prices that would have made many festivals blush ten years ago… £2.50 a pint! But there was an air of confidence about this years festival that I haven’t seen before, the kind of confidence that comes with maturity and one that says “this is Watchet live and we’re bloody proud of it”.

Its always staggering how many festivals keep popping up in this country each year and how many manage to survive, even though the English weather is not really conducive to outdoor events and there are obviously people who will think that, as a nation, we must either be particularly stupid or have seriously boring home lives to want to drive miles and spend time and good money standing outside in the pouring rain and trudging through welly deep mud! I personally like to think we have an appreciation of art and creativity, with a terrier like tenacity that sets us apart from the rest of the world! (though I do possibly understand why people might think the former..) However, having heard the weather forecast for the weekend, there was a small part of me that was wondering how sane I was, voluntarily driving off to yet another venue in the pursuit of art and creativity!

I spoke to friends over the weekend who had been experiencing the predicted torrential downpours as near as twenty miles away, but at Watchet it hardly even drizzled for five minutes and the ground remained dry the whole weekend, but although it definitely helped, I still don’t think this was what made this years festival seem different.

Friday night on the main stage saw the very welcome return of skafunkapunkreggaerockers “360”, I was so pleased to see them back, these boys really know their business, great songs played flawlessly with a cheeky wink and a perfect choice to work up a crowd ready for the evenings headliners “the Real Thing”. I think the Real Thing surprised everyone, with three original vocalists all still sounding on top of their game, aside from the humongous back catalogue of hits, you wouldn’t guess these guys could possibly be in their 60s, and as they sang and danced their way through “you to me are everything”, “cant get by without you” and “can you feel the force” so did the Watchet crowd.

The thing with festivals is that everyday people that would think you were weird if you spoke to them in the supermarket or bank, relax and open up, almost unconditionally after a day or two, like they suddenly trust humanity again, that’s great for the benefit of humanity, but I got chatting to so many strangers I missed Micks music quiz at the Croissant Neuf on Saturday morning! Well I wasn’t sticking around for the Zumba, or the belly dancing classes, so I hot footed it across to the something else tea tent. It was at this point that the penny started to drop, while the festival hadn’t increased in size, or changed its layout from the previous year, there had been subtle upgrades made to the quality and organisation. The Something else tea tent, as the name would suggest, sells cake and teas amongst other stuff, but it also had a stage and new PA system this year, the extra oomph and clarity made a massive difference most noticeable when you have bands like “Bemis” giving you delicate three part harmonies, 12 string guitars, and quality songs where the words are as important as the tunes. The atmosphere was relaxed and fun the whole weekend with many musicians from the main stage bands finding it as their hang out, or place to get up and jam ego free while punters chilled on scatter cushions enjoying the slightly lighter side of life.

With three stages playing live music it was difficult to get bored, but also difficult to see everything that was on offer. Across the weekend, the Croissant Neuf tent, which is resident at many of the larger festivals, had probably the largest range of entertainment, with everything from the music quiz (I missed!) and dance workshops, to the metal sounds of Zoltar speaks, upcoming songwriters like Mireille Mathlener, and the indie pop classics of miles & Erica from the Wonderstuff, but something which bemuses me to this minute was the mass appeal of the Cheeky Girls on the main stage late Saturday afternoon. Yes, ok, I must be stupid if I cant see why some people (mostly blokes) would go and watch them, strutting around and shaking their thing with nothing but a bikini and a pom pom to protect their modesty, but the crowd went bonkers for them! Ah well, I guess its one for the organisers and nil for grumpy old “real music loving” curmudgeons like me! Luckily, folk punksters ferocious dog were up next followed by, for me, the one of the weekends top bands Mad Dog Mcrea, these guys brought the spirit of live music back to the stage and any band that has its roots in Ireland, writes a song called “am I drinking enough?” and is fuelled by ¾ of a bottle of Jameson’s in an hour (the remainder of which I was duly offered a swig of after the set), is going to be a hit with a festival crowd, but when they played “the bear necessities” and as Saz Skinners giant puppets came up on stage behind them, it all became pure theatre and few acts could have followed on from them. As it turns out, the band that did follow them were probably my favourite band of the weekend “the Blockheads”, ive been a fan of them since I was a teenager, and to see them for only my second time, playing a small festival like Watchet was “one of those moments”, since the untimely death of Ian Dury, the blockheads have been fronted by different geezers, most notably Phil Jupitus, but recently and here at Watchet Derek “the draw” Hussey was on duty. Apparently Durys friend and former chaperone he performed with an authenticity and respect that the songs and remaining Blockheads deserved and with Norman Watt Roy jigging about the stage, hammering and slapping the bass lines that helped make “what a waste”, “Reasons to be cheerful”, “sex and drugs and rock and roll” and “hit me with your rhythm stick” classics of a generation and I could have walked back to the campsite a happy man… but there was more, last band of the evening were Bristol based skank rockers Babyhead who impressed the remaining audience with a supremely energetic and superbly tight set of original and at times improvised dub /funk hip hop.

Sunday was fancy dress day, and as usual the crowds arrived in style dressed as gnomes, goblins and fairies, not to mention a few that didn’t seem to know or care what the theme was, they just turned up in anything that might raise a smile, or perhaps hide a glazed, hung over face from the night before, but spirits were high and Sunday afternoon was full of it, with the Redhillbillies and Ten pound suit band packing them in at the Croissant Neuf and Los Albertos starting the lively stuff on the main stage, swiftly followed by rosie face, cider swilling, one time west country wild boys “the Wurzels, who entertained a full house with classic scrumpy rock as well as tongue firmly in cheek renditions of modern rousers such as ruby ruby ruby ruby… ooaar ooaar ooaar.

Every festival has a feel and ambitions of its own, some strive to be the craziest, the longest, the most serious about a particular type of music, some are yet to find themselves or be able to state what they stand for, but this year Watchet seemed more comfortable in its own company and happier than ever to promote itself as a place where all types of music are available and as Shane McGowans former band “the popes” closed the show on Sunday from the same stage the Wurzels had been on two hours earlier, I don’t think anyone could argue, this is entertainment for everyone in one place.

Published on 30 August 2012 by insomniac jack