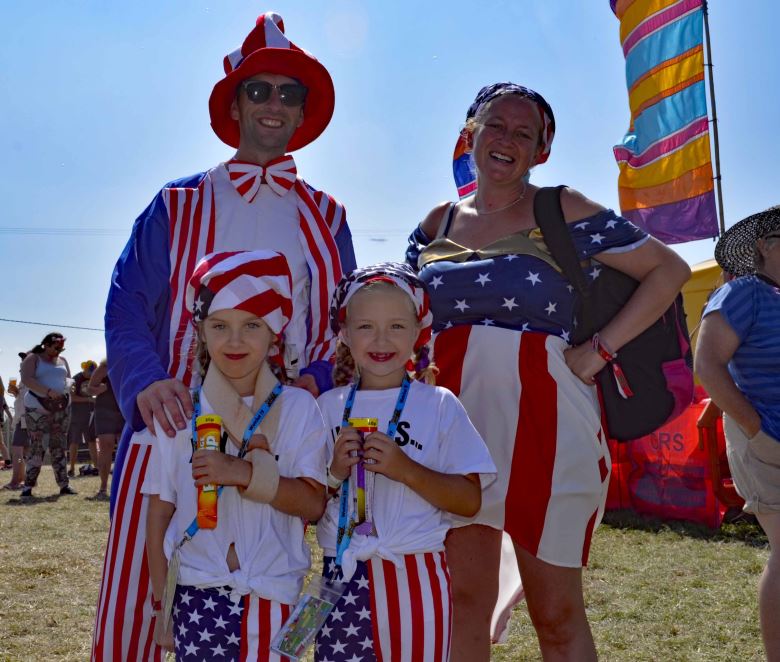 Who says you can’t have your cake and eat it?! This year Watchet festival was stuffing its face, basking in the hottest august bank holiday on record and oozing quality from every orifice.

A straight three day sunfest on this weekend has been a long time coming, but that’s not what sold Watchet festival out for the sixth consecutive year, or made household names like Embrace, Sophie Ellis Bextor, or the lightening Seeds decide to come and perform here, no, that all happened because this festival has been slowly building reputation that “this is the place to be” on August bank holiday and this year it was buzzing with a vibe like never before.

there are no 7 quid programmes on sale here, you get a free paper at the wristband exchange, that tells you all you need to know about who’s playing where, artist biogs, a map of the site and even a bit about some of the teams of volunteers that work there, there’s no corporate sponsorship and booze is on sale for a poultry £3.00 a pint, that’s cheaper than your local boozer and it’s a quality beverage with Ciders and ales that`ll make your hair curl. This all helps keep punters on site and the place buzzing day and night.

A kind of civilised bedlam occurs at 9 O`clock on Friday morning when the camping field opens and people pour in to bag a decent spot for the weekend, hopefully a short stagger back from the main site in the evenings, there’s also plenty of toilets on the camp sites as well as the main field, which are cleaned and emptied every morning, keeping them whiff free for the duration, a massive improvement on festivals of yesteryear.

At 7.30 on Friday night, a hero of mine Hugh Cornwell, original front man and main song writer of the Stranglers hit the stage with his band playing through a set of choice Stranglers numbers and songs off his latest album Monster, too early on in the evening in my opinion (but then he is a hero of mine, so I’m very biased!), but when you have the Alabama 3 and the lightening seeds on the same bill, you can see the logic. Although probably somewhat anonymous to the general public, Alabama 3 surprised many and made a lot of new fans Friday night, the perfect warm up for the brilliant Lightening seeds to finish the day.

There are quite literally class acts playing from noon till midnight all weekend long here, some you will have heard of, some you won’t, but don’t be fooled into thinking that the less well known are not equally worth a look, I saw Palooka 5 in the Udder stage and, although a few ales had passed, I made a statement I stand by still, I have never heard anything more perfect, 60`s garage, with surf guitars, a grinding Hammond organ and a touch of tongue in cheek for good measure, I bought their album and haven’t regretted it since!

The ever changing dietary requirements of the population are well catered for here too, with Veggie, Vegan (including Vish & chips!) and gluten free all on offer as well as treats for the traditional carnivorous festival goer in the form of Pizzas, pasties and of course the old faithful burger and fries.

Elliot’s touch, the silent disco always proves a very popular draw here, with, I was told, 3 DJs playing simultaneously, resulting in a whole manner of different dances on the same floor and with not a single complaint from the neighbours!

Saturday saw the arrival of Watchet favourites The Barsteward sons of Val doonican, these boys are normally the preserve of the Sunday line up, a sort of double header with the Wurzels, I’m guessing, following their victorious appearance on the Glastonbury Avalon stage this year, they must be booked solid with festivals, but as usual, no matter the day, they ripped it up to a capacity crowd, most of whom stayed on and were then captivated by the Rock N Roll/ Bhangra crossover of Kissmet.

1970`s chart toppers, Hot chocolate followed, with a back catalogue most modern bands could only dream of.

The excitement was tangible as the crowd awaited the arrival of the statuesque songstress & pop diva Sophie Ellis Bextor, not particularly my type of music, but it was impossible to deny the quality of her show, so polished and engaging and with her own veritable packet of hits, she charmed even her most ardent critics into accepting this was a professional at work, and then finally, like a warm coco before bedtime, Embrace closed the show, with a flawless and classy performance of their hits & album tracks, including Gravity and Come Back To What You Know.

Unlike many other festivals, everything here is contained in one field, with a stage at either end and a surprising lack of bleed over from each other, this is great if you don’t want to, or aren’t able to walk too far, there are also very good disabled facilities in the form of a viewing platform, dedicated toilets with a passcode and a camping area right at the entrance to the site.

one of the real gems in Watchets crown is the location of the site, which although high up on a hill, is, in the main, surprisingly flat and with stunning views of the bay and harbour as a backdrop to the main stage, there aren’t many festivals in the world that can boast such a setting.

As if all this weren’t enough, some of Watchets pubs also put on music in conjunction with the festival, most notably Pebbles tavern, where many of the festivals booked artists, will do acoustic sets. Although quite physically challenging, it’s a beautiful walk down to the town, but free busses are also available to and from the site for those less able, or perhaps anyone just nursing a hangover and it’s a good chance to sample the delights of this (normally) wonderfully peaceful coastal port, or just top up on urgent weekend supplies.

Appearing as a sort of anarchists enclave in the heart of a civilised society, the Something Else Tea Tent is there to serve the needs of anyone looking to chill out, or listen to something slightly less mainstream and as well as serving tea & cakes, it has a small stage reserved mainly for acoustic acts and poetry, although occasionally full bands do slip into the line-up, such as the brilliant Ghosts of Men, the all-star cast that is Abdoujaparov (try saying that after a few of the boozy coffees on sale here!) and Muddy Summers and the Dirty Field Whores.

Fancy dress is always a well-attended here, and it’s amazing to see different takes on the theme, which, this year, was stars and stripes. Plenty of Uncle Sam’s, a few astronauts and the resounding competition winners, a Donald Trump-alike and 6 Mexican bandidos carrying a wall!

Sundays mainstage line up was Watchet festival at its best, total variety and pure entertainment, the skatatones really picked up the pace from Ire Fire and the Jive aces cut some rug and put the swing in our step with a perfect sunny Sunday boogie woogie session. The biggest crowd of the weekend is always there for local boys and the self-proclaimed original boy band, somersets own The Wurzels, a spot for any band after them is always a tough gig, but Laid blak kept things going and left a full house for former Joy Division and New order bassist Peter Hook, with his band The Light, to wow onlookers with an exemplary run through of hits like Blue Monday, and Love will tear us apart.

It takes a special kind of act to keep an audience from their sleeping bags at the end of the last day of a sun drenched, alcohol fuelled weekend of partying, but Reverend and the Makers did that better than I’ve seen many attempt, the on stage banter, interaction with the crowd, and booming up tempo tunes had a full house rockin and more specifically, bouncing till the end. A perfect way to finish an unforgettable weekend.

The weather this year was exceptional, no doubt it was a welcome addition, but that was just a side order to a festival that already has what every festival wants, great music and a buzz that’s all its own and whilst it may never increase in size, its reputation is growing by the year and its almost a guaranteed sell out these days, so i`d seriously book your tickets early if you want to be at Watchet next year.

Published on 02 September 2019 by Keith Dennelly