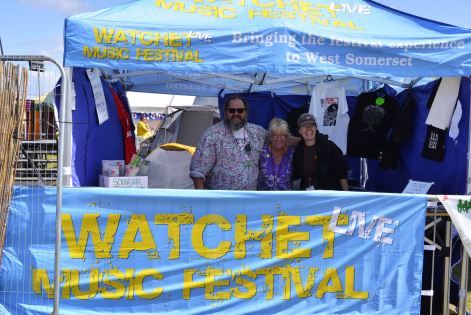 The sign over the gates at Watchet festival this year should’ve read “leave your cool at the door and enter the house of fun”!

Perched up on the top of a coastal hillside high above the Somerset town of Watchet, the festival site has one of the best back drops imaginable and when you wake up on a clear, sunny morning and look out of your tent with the sea breeze wafting the smell of someone’s sizzling snorkers your way, you know it’s gonna be a good day!

This festival has been my home for the last 7 or so august bank holiday weekends, and that’s not by accident, or because there’s nothing else on, it’s a simple case of,

If you are prepared to just relax and unconditionally indulge yourself in the luxury of having fun, there’s no better place.

Friday nights party was in full swing by the time Eric Faulkner’s Bay city rollers hit the stage, with Eric in fine raconteuring mode, re-counting the tales of a life spent paying his dues, and blasting out the rollers classics “Bye bye baby”, “Shang a lang” and “Give a little Love”. The crowd loved them like it was 1975 all over again.

Geno Washington, musician, actor and the inspiration behind the 1980 Dexys hit “Geno”, along with his Ram jam band, followed by 90s indie pop band Toploader, famed for such hits as “Dancing in the moonlight” and “Achilles heal, wound up a great main stage opening night of the festival.

Saturday morning and the weather was once again Glorious sun, with a dash of a breeze, just enough to dry the grass in time for sitting down, enjoying a pint and the beginning of the days music selection.

It has to be said that the bar here at Watchet is one of the cheapest and most efficient I encounter on the festival circuit, selling 17 different ciders and the full range of Cotleigh brewery’s finest ale all at £3.00 a pint, and if this wasn’t enough to put a smile on your face, they even had a happy hour with prices slashed to two quid!

There was so much going on every day it was difficult to see half of what was on offer, with two music stages, a felt workshop at Peggy Firecrackers’, cake making classes at Nanas kitchen, stilt walkers, hoola hooping and general festival freakery, plus the inimitable Something else tea tent. This tent, most often referred to as Gails by those who pass through on a regular basis, has a line up of events that just you just couldn’t book, music, sporadic poetry, open mic and a whole manner of impromptu performances, sometimes its worth just going in for a cup of tea and people watching. This place also serves as a late night hang out for off duty musicians, and the more often than not, amusingly drunk. At times it may feel like you’ve walked into a scene from a Tom waites song or David Lynch movie, but its about as real as festival life gets and is a great contrast to the main stage goings on.

The Saturday line up on the main stages looked, on paper, to be an unbeatable collision of great music, Yoga-size, general cheese, quizzes, interviews and…well..Punch and Judy, a little something for everyone then!

The first band to catch my eye with a really tight set of out of the ordinary songs, and with a great name too, was Victorian dad, they describe their music as “an  industrious smelting-pot of rock, grunge, folk, passion and man power with a sleeve-pinned heart”, couldn’t have put it better myself.

Folk rockers Leatherat, a band who have shared the stage with many big names from the levellers to Jethro Tull, also put on a great show and reaped the benefits of the afternoon sun, the crowds appreciation and succeeded in warming up Watchet for the Fantastic Tankus the henge.

Some serious deliberation took place over where to be for the ensuing Saturday night headline spot, 1980s two tone giants Bad Manners v skiffle punks Hobo Jones and the junkyard dogs. Luckily, there was a half hour overlap that meant I could see bits of both.

Bad manners with all their back catalogue of hits to throw at the audience, sounded supremely tight and authentic, the security was stepped up to cope with the legions of Harrington and Doc Martin attired 40 something’s that had come for the chance to cider up and re-live their youth. Buster bloodvessel strode on to the stage with a bottle of lager in each back pocket, to endearing chants of “you fat b*stard” from the Bad manners faithful, played a blinder, dominated the audience and ultimately received the respect he deserved for just being a legend.

Sunday mornings little slice of peace and tranquillity was immediately shattered by balls out rockers White Pigeon. With a visual nod to the Bon Jovi dominated 1980s stadium rock era, sporting head bands and Baseball boots, they literally blew away not just the cobwebs, but hangovers, ear drums and peoples expectations of what an opening act at a small festival might achieve. A great start to a final day of the festival.

The mighty atom that is Ned the kids Dylan followed and the tent filled quickly as the crowds came to witness why this amazingly talented 13 year old singer / songwriter is gaining such a reputation among festival audiences & bookers.

The Sunday fancy dress competition is always popular and great fun, with this year’s theme being Famous dead people. This all sounds a bit grisly, but was brilliantly orchestrated and gave wide scope for outfits and a really good array of Elvis` and Michael Jacksons, but the winning contestant was an “I want to break free” era Freddie Mercury-a-like.

Warming up for the, now legendary, Sunday afternoon performance by Somerset’s own cider swilling, septuagenarian bad boys and 1970s chart sensations, The Wurzels, were the tank top tastic, cheeky Barsteward sons of Val Doonican playing their own re-worked version of the House of pains classic “Jump around”. The crowd obliged with exactly what it said on the tin and Jumped around while singer Scott Doonican surfed the crowd, taking the time to have photos taken and casually picked chips from the plate of an unsuspecting punter.

When the Wurzels finally hit the stage, the crowd was moist for a sing along and they were never going to be disappointed. With a list of classic crowd pleasers including “Where be that blackbird too”, “Ruby, Ruby, Ruby, Ruby (ooaar, ooaar, ooaar)”, and the song that brought them international acclaim all those years ago “I got a brand new combine harvester” this was Watchet festival at its best.

In the past I’ve felt sorry for bands having to follow on from the buzz created by the Wurzels, but this year Company B marched on to the stage dressed in WW2 American GI outfits and very successfully kept the party going with a set of Boogie woogie and swing classics made famous by the likes of Louis Jordan, Benny Goodman, Cab Calloway and Louis Prima.

Following on from the ever popular festival regulars and DJ Chris Evans` proclaimed favourite band, Bellowhead, were one of the most successful chart bands of the late 1970s, Boney M.

I had heard a few rumours that they would be miming, or that they couldn’t cut the mustard these days, if they ever could, there’s only one original member, etc etc. But all that went out the window when they took to the stage. The years disappeared as they rolled through the hits “Rasputin”, “Ma Baker”, “Sunny”, “Rivers of Babylon”, “Brown girl in the ring” and so many more. The sound system on the main stage was awesome (even if the bass levels did reek havoc with my camera). Original members or not, the band were superb and the harmonies sublime, no doubt about it, Watchet had scored another winner. What a way to end the festival!

I go to many festivals each year, and I enjoy each one for different reasons, some are chilled, some offer big names, or acts that no one else has, and some, like Watchet, are just balls out fun, and towards the end of an exhausting summer, this weekend has been just what the doctor ordered.

Published on 01 September 2014 by insomniac jack