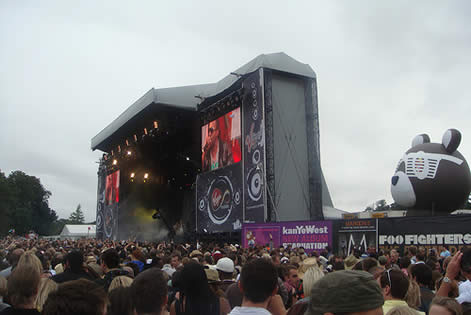 V festival in Staffordshire was a weekend that many will look back on as being the highlight of the summer, with acts such as Rihanna, Eminem, Arctic Monkeys, The Script and not forgetting the amazing performance from Bruno Mars and many others. However whilst other bloggers will concentrate on the artist and the music, I would like to concentrate on the audience (which in my opinion made the weekend).
The atmosphere was something that can only be felt to be believed, a mixture of excitement, euphoria and (a lot) of merriment. A mixture of people from all walks of life, from different backgrounds connecting and joining together to appreciate the music. All around there were people making friends, joining in comical banter and displaying their own sense of style. Whilst there obviously were the obligatory straw hats, the daisy chain head bands and the multi- coloured body paint everywhere you looked, the individual still stood strong a displayed their personality in a comfortable and welcoming environment.
However whilst some could argue that the sense of dress from many their was somewhat a uniform, all a variation of the same style (from pictures of celebrities at Glastonbury). There were many groups who had obviously asked themselves the question how can we stand out? And with planning of outfits, they certainly did! The fancy dress displayed was imaginative and often used as an ice breaker between the acts and the audience when they tried to connect. The spectrum of fancy dress was massive, from nuns and vicars to all in one coloured costumes.
The annual Ducks weather for Weston Park held off for the Sunday Line up, which for those who are not in the know mirrored the previous days Artists schedule at the Chelmsford site. The Staffordshire Sun put his straw hat on and the abundance of Wellies were left redundant, in turn this sparked the revival of the British summer tan (burn). Though the weather wasn't enough to attract Mark Ronson's rapper to catch his plane over from the States, he was forced to perform without though this was never evident. The performance was highlighted when he dueted with Dionne Bromfield to perform Valerie, in an emotional tribute to the V Festival favourite Amy Winehouse.
With such rich and diverse list musicians performing it would be hard to imagine wanting to sample alternative entertainment. But they had it all covered, a Arena devoted to the fresh emergence of British Comedy Glee Club was well worth a visit for the weekend festival goers.
The whole experience of V was something that I would recommend to anybody, it was something like nothing else. So thank you to the artists... from KT Tunstall, who may I mention encouraged the crowd to shout in chorus what a fans T Shirt said...Clunge, to the energetic Calvin Harris who played a live set straight from Ibiza.
A sincere thank you to the organisers and most of all thank you to the crowds because if it wasn’t for you guys it truly wouldn’t have been the same. Bring on V fest 2012!
By Toni Edwards & Ben Brand