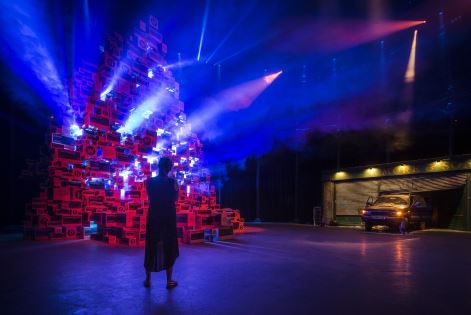 Walking into the main room at the Camden Roundhouse; it’s dark and steamy, and immediately all eyes are drawn to the main feature of the installation in the centre of the room. An imposing tower of cardboard boxes designed by Glastonbury’s innovative set designers Block 9 with club-style lighting emitting from it’s core. It’s very cool. The boxes have words printed on them representing the things that modern society has made us aspire towards or achieve – ‘wealthy’, ‘desirability’, ‘cool’, ‘popularity’.

Before seeing the rest of the installation the evening’s performance begins. An inspiring if slightly drawn out introduction from choreographer Arlene Phillips; expressing her concern over the pressures of money; cost of living in London; consumerism and the loss of old fashioned values.

The performance was a story of money, inheritance and celebrity told through a mashup of ballroom and street dance styles. Performers included the talented and charming Tommy Franzen, bright-eyed street dancers as young as 8 years old from ZooNation Youth Company, the inspiring Roundhouse Street Circus Collective and amateur ballroom dancers. I was moved by the storyline, the street dance was explosive and entertaining and the ageing ballroom dancers were heart-warming but I could sense from the slightly confused feeling in the audience that something else needed to happen at the end to pull it all together.

The rest of the installation took visitors on two separate journeys around the room. The first a messy library and impressively chaotic street scene complete with traffic lights, piles of rubble and shopping trolleys. As visitors moved through the scene, ears were drawn to nooks, crannys and openings where voices could be heard coming quietly from speakers. First person stories, mainly from young men’s struggles in life were being told. Gang crime, family loss and general disengagement from society. My guest said she heard a story of a young man who’s aunt had been found chopped up into pieces.

The second journey was more varied. My favourite part of the installation was a large projected video made of snippets of film depicting the scale of global consumerism. I think “There’s more to life than trainers” will always stay with me and I like to think other visitors took this back. The printed boxes featured heavily within this section and I sat down to listen to a young girl who had left uni and was talking about how wasted she had gotten on a night out and how her friends all had good career prospects, or who’s parents were setting them up with flats. This was all the while scrolling through her Facebook feed on a laptop, surrounded by boxes with the words desirability and popularity on them. Very current pressures on young people indeed.

Both journeys led to a large screen split into sections with different people taking it in turns to read from the book Utopia by Thomas Moore. This cut through a lot of the sadness depicted in the installation with uplifting verses and potential ways that we could all achieve a more utopian life.

Utopia is a powerful, thought-provoking installation. It’s also accessible to non-regular art goers, is visually impressive and I would recommend it to everyone and anyone.

Published on 20 August 2015 by ukfestivaldan