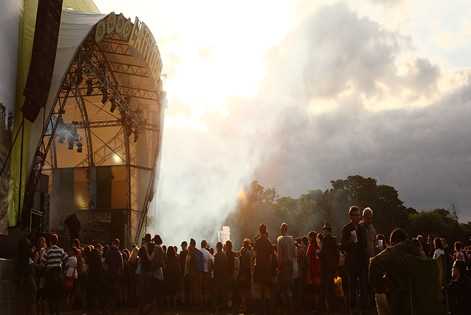 Beautiful Henham Park in Suffolk was transformed for its’ seventh year into the venue for Festival Republics superbly diverse Latitude Festival. Based in a wonderful parkland setting around a lake with woodland areas, it really does have a special feel.
Despite the recent poor weather the site was looking fantastic and ample contingency plans were in place should conditions worsen.

The festival began with an amazing performance on the Waterfront Stage, built over the lake, by the incredibly talented Aldeburgh Young Musicians ensemble to a large and appreciative audience.

Friday provided a great and varied array of musical talent from such as Kevin Rolands’ Dexys’, Lana Del Rey, Yeasayer and rounding off the night in the Word Arena an excellent set from its headliners White Lies.
The main, Obelisk stage, sat proudly at the top of the hill and featured a great set from African duo Amadou and Miriam, Janelle Monae, the increasingly popular Metronomy, finishing off with double Grammy Award winning Bon Iver.

Saturday continued with the eclectic mix with a notable performance from Lianne La Havas in the Word Arena, whilst on the main stage the sun burst out from the clouds in time for singer/songwriter Laura Marling. This was followed by undoubtably the most eagerly awaited performance of the weekend to a massive crowd by the ever popular Elbow. A brilliantly entertaining performance from Guy Garvey rounded off with some spectacular fireworks lighting up the packed arena made this very memorable.

By Sunday the weather had improved and the mass of festival goers were entertained to a lunch-time performance by the world-renowned classical pianist Lang Lang on the Waterfront stage. This is, after all, Latitude and such diversity shouldn’t by now be a surprise.
The prestigious Sunday early Obelisk Arena slot was given to Rufus Wainwright who was very well received by the crowds enjoying the improved weather.
Eighties electronic pops’ Thomas Dolby gave a great performance in the Word arena, followed by equally good ones from St Vincent, Battles and M83. Finishing of that stage were Wild Beasts.

Back on the main stage the enthusiastic crowd were treated to an excellent set by Simple Minds. The wonderful Mercury Music prize nominees Bat for lashes with vocally talented Natasha Khan came next followed by Ben Howard's biggest gig to date.
The closing headliner, Paul Weller, was perhaps a slight disappointment to many with a fairly lack-lustre show. The highlight it seems for many who made the effort to reach the Faraway Forest was an incredible treat in the form of The Levellers who really got the very large crowd on their feet and jigging.

With some fairly heavy rain showers causing some mud trudging during the weekend, the festival team had done their best to ease any problems with massive amounts of wood chippings being used to improve the main routes around the site. The condition of the main arena itself held up very well. Well done on their efforts.

As always beside the quality music acts playing on the four main music stages there was something for everyone, including the incredibly popular Comedy Arena with top name comedy from the likes of Jack Dee, Russell Kane, Tim Minchin, Shappi Khorsandi, Josh Widdicombe and many, many more.

Literature, poetry, cabaret, dance, film, theatre, and art all sit together so comfortably and go make this a truly special festival. A dedicated kids area and genuinely present feel really make this a template for other festivals to follow.

The festival boasts the tag line “more than just a music festival” and it certainly is! Roll on the next edition.

Review and Image by Rob Marrison

Published on 18 July 2012 by robmarrison