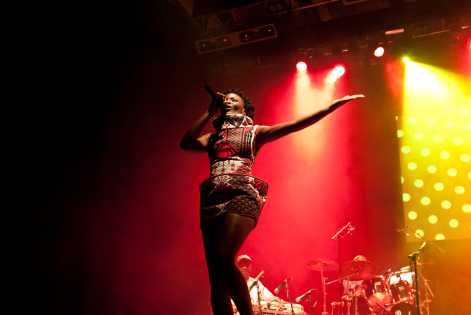 Brighton: The final day of The Great Escape was perhaps a little more muted than the second. Despite the sunny weather, there were grumbles about the length of the queues, with people missing favourite acts or having to spend several hours hanging around in one venue just to catch a single half-hour set. The festival being diffused across so many small venues only increased the effect, and also meant that there was no one place that people could hang out, apart from the Green Door Store at the end of the evening. If you could get in, that is... Despite all that, there were some cracking performances to dispel any irritation.

Having already done one show on the Thursday, Lulu James took part in the North East Invasion gigs on Saturday afternoon in The Haunt, where an expectant crowd quickly filled the main and upstairs bars. The Newcastle singer displayed an obvious sense of drama by arriving on stage dressed in a long, flowing cloak, with hood, that would have made me think of the Scottish Widows adverts were it not for the attention grabbing, and keeping, soul voice that was as surprising as it was impressive. There is something Ertha Kitt-like in the smiling, feline edges to her voice, but Lulu James has much more power, and control, and seems in complete mastery of her talent. She is helped by having music to support her that is both restrained and interesting, with trip-hop-edged slow, fuzzy beats combined with keyboards and guitar that provide more of a texture and palette for her to work from than anything too defined. As Lulu pulled back her cloak and, eventually, took it off to reveal an LBD, the music became looser and the tempo increased, ending on an toe-tapping crowd-pleasure that had a Ferry-like sophistication, a sort-of posh-nightclub feel, that might have worked even better if she had been later on the bill.

I can't imagine South African singer-songwriter Farryl Purkiss in a posh nightclub. He looks more of a chuck wagon kind-a guy. He and his band were tuning up when I arrived at The Hub in Jubilee Square and they looked every inch the 1970s country rock outfit. Fortunately, the country rock sound has been made smaller and more intimate from its overblown, overwrought and over-bearded heyday – nowadays, for example, only one band member can have a beard longer than extended stubble. Fitting that mould, Farryl and friends were accomplished, inventive and extracted the most from the confines of their chosen style, sampling and overlaying semi-acoustic guitar riffs and effects as they played to give some of the songs a mesmeric strength that suggested a bigger venue might have been in order. But this was music that was made for festivals, and sitting outside on a partially sunny day, albeit not on grass, to listen to Purkiss et al seemed about right. There were quieter, intimate moments too, and Farryl seemed at ease with the crowd during a very pleasing half-over out of time and place.

There was nothing too pleasing about the next act on my list. Reverend and The Makers were on the original bill for the Brighton Dome, but they were replaced with Splashh. What could go wrong, I thought, seeing as every thing I had heard thus far had been at least played by extremely talented musicians, even if not always to my taste. Splashh were neither. And I would suggest the frontman stops trying to sing like Liam Gallagher. And change your name.

Nothing needs changing about what came next. The Africa Express Sound System have been described by Damon Albarn, one of the driving forces behind this and the original Africa Express, as the future of music. It is hard to disagree when the collaborative, cross-cultural, egalitarian ethos aimed at with Gorillaz is achieved so effortlessly and so genuinely by this group of fine musicians and performers. It is hard, or it has apparently been hard, to create this kind of mix without seeming naff, patronising, awkward or just wrong, but there was no such feeling on Saturday. The non-stop stream of talent – including Kano, South African DJ and producer Spoek Mathambo, Mim Suleiman, who could perhaps qualify for most powerful voice in the universe, Senegalese artist Diabel Cissokho, Reverend and the Makers’ frontman Jon McClure, Gorillaz keyboardist Jesse Hackett, Ghanaian hip hop pioneer M3NSA, British singer-songwriter Terri Walker and West African percussionist Musa Mboob – was given room to breathe and express itself, while maintaing a whole that generated a unique atmosphere in which there was never a moment of silence, and the noisily appreciative crowd were swept along in a wave of goodwill and expert music-making. Noisettes vocalist Shingai Shoniwa and guitarist Dan Smith joined the stage for a couple of tracks, and while they fitted seamlessly into the overall palette, there was never a sense of anything being over-rehearsed. Quite the opposite – it sometimes felt as if you were sitting in on the Best Jamming Session in the History of the World. Ever. For me, the highlights were when Diabel Cissokho took the lead, and the breathtaking performance of Mim Suleiman, but that is partly because I am more familiar with the types of music performed by the other artists. To say that was a fitting end to The Great Escape would be an understatement. It was an extraordinary gig, and the good thing was that everyone, performer and audience members alike, seemed to realise that.