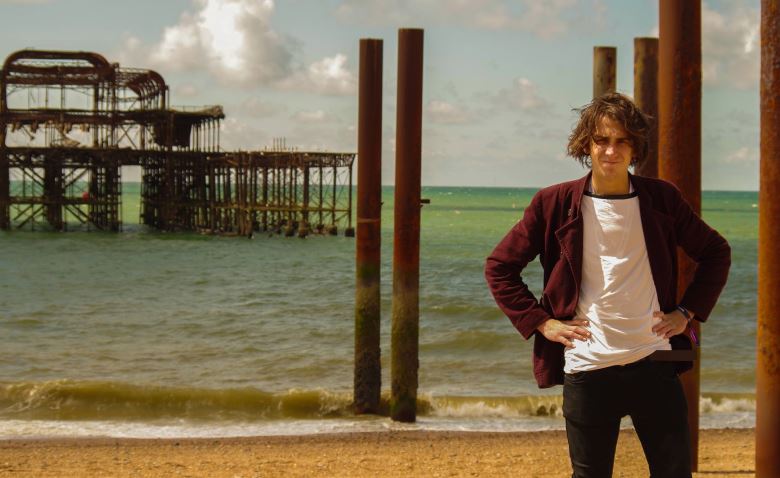 Life doesn’t always go to plan. On the way to work, your legs suddenly cease to function and you’re rooted to the spot. Did you forget to oil your kneecaps? Are you waist-deep in wet cement? You clasp your face with fear only to weld your hands to it as your entire body becomes the colour of metal and as supple as stone. You’ve become a living statue and this is your new profession, like it or not.

Do not worry, though, as there’s far worse fates than this near-alchemical transmutation from flesh to gold. You could become a Morris dancer, clad in cricket whites adorned with colourful ribbons and rattling bells, waving handkerchiefs above your head like someone in the next town has a streaming cold and you’re the only person who can help. At least, that’s what the troupe appeared to be doing in Brighton during the week of 2017’s Great Escape Festival.

It’s baffling, really, how Morris dancing is still practiced. Neither gracious nor mesmerising and certainly not seductive, it’s more reminiscent of drunken one-legged kangaroos with Tourette’s syndrome. Sometimes they bash sticks together and dance to seaworthy folk music like a scene from the world’s worst pirate pantomime. I hope they know they look stupid. But it is amusing to behold – mostly owing to the sheer embarrassment – so perhaps that’s why it was on offer in modern day Britain.

Or it could be that old excuse for insanity: tradition, the reason why we annually stand 6ft coniferous trees in our lounges, race with pancakes in pans and scream ‘Happy New Year!’. I’m not saying these things can’t be enjoyed, but they are often pointless, done simply because our parents taught us so.

Sadly, another relic of the bizarre past that lives on is the Charleston dance, also a ridiculous assortment of arm swings and leg shakes to antique music. An act I misheard as ‘Super Trolls’ (real name: ‘Swing Patrol’) were performing a live, interactive Charleston session where they walked the public through the many moves. And my word the place was packed. Just not with people joining in. Everyone was drinking beer at the bars opposite, looking on with a smirk of ‘rather you than me’. Well, apart from one couple who braved the onslaught of the energetic dance teachers’ excessive enthusiasm for shouting commands and relentlessly smiling. Why are these sorts of people so incredibly exuberant? Are they starved of attention or stuffed with MDMA?

One way to catch people’s eye is to steamily rub lubricant on your bald head and body before squeezing yourself inside a giant, green balloon. Do it head first, then slip in the torso, and finally leave your chicken drumstick of a lower leg hanging out and waggle it like a dog’s tail to the beat from your audio system, just like another Great Escape performer did. Oh, and when fully contained in the rubber prison, bounce up and down for a while, eventually reappear dressed as Elvis Presley and do a very brief bit of mime to a song. That’s entertainment, folks.

How Would You Know I Was Artsy if I Didn’t Tell Everyone?

I stole that subheading from a very good question posed in a song by the Rhythm Method: ‘How would you know I was lonely if I didn’t tell everyone?’ Much like the calendar-based contraceptive technique they’re most likely named after, the band is all about fun: drinking on stage, cheesy dance rhythms, comedic lyrics… Lead singer Joey’s rapping is often a slurring alcoholic’s attempt at karaoke and the voice of keyboardist Rowan reminded me of a shoddy Neil Tennant impersonator, if such a thing exists. Combine this with guest vocalist Zoee’s helium-high singing and you’ve assumingly got a recipe for a talent show laughing stock. But in actuality, it works. I wouldn’t know what genre I’d classify their sound – although to me it seemed like a parody of dance music – and with the jokes and the individuals’ respective charisma, they were without doubt the best act I saw in Brighton. And I may even dare to use the cliché ‘unique’.

Speaking of clichés, have you heard of the musician Glassmaps? I hadn’t until I saw him and his band in the Queen’s Hotel’s dimly lit underground function room and he typifies those artsy kinds who seemingly lead the most turbulent, melodramatic lives imaginable. Here’s a quote from his Bandcamp biography: ‘…more than anything, Glassmaps is about strong and idyllic melodies wrapping themselves around autobiographical tales we can all relate to.’ Fair enough, but I’m sure he introduced a song as written about being madly in love with a girl and not knowing why. Now, I don’t know about you but to me that could suggest the stance was both effortless and enjoyable, and if he was reaping all the benefits of an intimate, consenting relationship, put me on the list to find a woman like that.

To slightly loosen the nails in his coffin, I say that Glassmaps’ vocals were good, though he’s by no means my favourite singer and when every track is introduced with a personal backstory, he did start to bug me. That said, for all my criticisms, his guitar work was solid and so too his drummer and bassist – overall a decent unit.

Elsewhere were performers galore, some busker-style in the streets, a scantily clad cabaret double act and a choir of old women to name a few. Some musicians were listed as Great Escape acts, others Alternative Escape acts, all under the umbrella of the Great Escape Festival, just to keep things simple.

In the Beyond Retro clothes shop alcohol was sold and some punkish act were thrashing away from the top floor as vintage shirts and the debauched looked on. In and around bars, pubs and clubs were several performers including Thyla, whose soundcheck in the Mucky Duck pub warranted a trip back that evening to hear their full set, only to be scuppered by my allergic reaction to some peanut butter. Still, despite my face swelling up like a hot air balloon, my airways’ suffocation and my vision horrifyingly replicating staring at the sun through a kaleidoscope, my friend and I got a free trip in the ambulance to A&E where a man repeatedly demanded a commode and a Nebuchadnezzar. Whether he wanted one of the Babylonian kings to kiss him better or a flight on the hovercraft from the Matrix, I don’t know. It’s highly likely he meant to say ‘nebuliser’, a piece of breathing equipment, but even when told they’d bring him one he complained and threatened to shit himself. Needless to say, my friend and I were out of there as soon as possible with my new EpiPenezzar.

If the mental state of the hospital patients was somewhat questionable, then members of the general, ‘healthy’ public must also be scrutinised as I’m sure everyone had a pint in hand at all times, a herd of women dressed in hazmat suits passed by in the street and on two separate occasions the same man devoured an Indian banquet and a Chinese feast fit for 18 families. Maybe they were just having fun. But there was an Eastern European man in our King’s Arms Hostel dormitory who listened to three hour atmospheric tracks of violent thunderstorms to help him sleep, presumably only to wake up five minutes later wide-eyed and trembling in a cesspit of bodily fluids.

For all its gay connotations and the odd homosexual apparatus store, I don’t believe Brighton exposed too much to enrage a homophobe but then I was ¼ gay until the backend of last year when I chose to give it up, so perhaps I’m a bit multicoloured flag blind. That said, I’m sure erotic endeavours of any orientation are there for the taking and I hear the Lady Boys of Bangkok are in town this year, a treat for the footballers and sexually undecided amongst us, a game of two halves, a body of two parts and all that. And if you stroll on down to Brighton Pier, you’ll be transported back to the days when ‘gay’ meant ‘happy’, when you could have a gay old time licking ice cream and shoving things in various slots around the amusement arcade.

Something way more overbearing than the gays were the artsy-fartsy types, an abundance of round sunglasses, Dr Martens, and vintage, brown suede and fur coats. At one point, I’m sure I saw two strangers stood next to each other in exactly the same outfit, not so unique after all. Then again, this may have been the repercussion of an influx of musicians and performers, although the city does have a reputation for the arts, so perhaps it could look this all year round. But if like me it is an unwelcome surprise for the eyes that you’d rather not endure, best stand at the far end of the pier and look out to sea to avoid them. And you can always throw yourself off it if their presence has been foisted upon you for more than 2 seconds.

Despite my scary mishap and a few people I’m glad I’ll never see again, I cannot say that I didn’t have a good time. On the whole, the acts on offer were marvellous for all the right and wrong reasons, the booze houses I visited were lively but not unbearably crammed and having the sea so nearby made for a great escape from the Great Escape whenever the urge arose. All in all, as far as urban festivals go, I would recommend the Great Escape and brand it as something I’m sure would satisfy many of the locals: ‘different’.

Published on 28 May 2017 by Joshua Perrett | Photo Laurence McManus