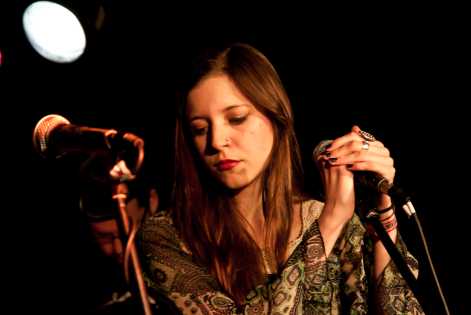 Day One, Thursday 10 May
Brighton: That a seaside town in the rain is the coastal version of a child's half-deflated balloon is something of a cliche. Yet I'm sure that's one of the reasons why Brighton's The Great Escape, which was ushered in today by grey skies and endless drizzle, is held indoors, aside from the sheer number of music venues available. Not that anyone cares about the weather when they are presented with over 300 bands at 30 venues over the equivalent of a long weekend, with only a fairly short dash from place to place.

Talking of music... Enter Slow Down, Molasses, from Saskatoon, Canada, who opened The Great Escape on Thursday at the Blind Tiger. The impression that they might be a polite bunch of youngish indie kids seeking to persuade rather than assault was not exactly dispelled when they were introduced by a man from their native Saskatchewan who had the air of a minor public official and told us about the booming local economy, among other tidbits of prairie life. But it was midday, no-one was quite up to speed and perhaps a soft drink would be about right, thanks.

Respectful of the hour and in keeping with their name, Slow Down, Molasses started gently, the two guitarists blending pleasantly and the moustachioed bassist delivering a fine line that was reinforced by the keyboardist. Two drummers seemed excessive, but I was in no hurry to judge. Good thing too, as it turned out, as their sound grew and swelled over several minutes, adding plaintive vocals, into a thoughtful, but muscular, crescendo that surprised the majority of the crowded room. That blend of refinement and power carried on throughout a varied set that acknowledged, but never copied from, the library of rock references, to deliver a whole that was very satisfying. The last song was a bit of a let-down but, overall, I decided that a little politeness is no bad thing.

No such sentiments were on offer when Australian five-piece The Killgirls slammed onto the stage at The Haunt. It may have been mid-afternoon, but it instantly felt like 11pm in a dirty Camden bar once the first chords ripped out in a blaze of fuzz and reverb. This indie/electro outfit have a swagger that deserved a bigger room, and a bigger audience, but majority of the people who had turned out for the Last Dinosaurs had sadly slipped away by the time The Killgirls struck up a note. That was a shame, as they missed a confident, uncompromising and well-drilled performance that was a complete antidote to the weather outside. Borrowing from The Whip, and grabbing keyboard riffs practically wholesale from electropop classics, they bounced and thrashed they way through their set. After a rousing cover of Sabotage by the Beastie Boys, they ended on a high, with a powerful version of Set Yourself On Fire from their eponymous 2009 debut EP.

When I reached Komedia in time for the evening shows, I was getting a little fed up of being cold and damp, and wanted something that would, at the very least, make me forget about the world outside. My wish was granted by Nottingham's own Jake Bugg, who looks like a teenager (he is, just) but sounds like a cross between Bob Dylan and Alex Turner filtered through the kind of charcoal they use to make Jack Daniels. The capacious Upstairs room was full, and eager for the kind of soul-searching folk-rock lyrics that suggested a life way beyond his years. If the words occasionally stretched credulity coming from someone so young, the music did not, and the bass and drums perfectly mirrored the noticeably precise playing from Jake. His stage presence was assured and measured, and there was a suspicion that he was slightly playing within himself. That there is more to come from someone with such talents at his disposal is not in doubt, and I for one look forward to seeing how he develops.

A band in development was certainly not what I came across downstairs in the Studio Bar at Komedia, where Ninette and the Goldfish, who arrived that day from Barcelona, played a set. Nina Thomas, aka Ninette, has a strong, powerful voice that you wouldn't guess at from her slight frame, and her band, who are significantly older than her, were mature, professional and clearly enjoyed themselves, particularly the exuberant acoustic guitarist. The music was accomplished, if a little uncharismatic, and the lyrics hinted at a rich life. There was much songcraft on display, and it was all enthusiastically received by the attentive audience. You could have been mistaken for thinking that they were performing to a home audience, and I suspect that it is only a matter of time before they find a regular following here.

A home audience was something of a given when Gaz Coombes was announced for The Great Escape, the only surprise being that the Blind Tiger was the chosen venue. By the time his band were ready, the pub was rammed and the windows were steaming. So it was something of a relief when Gaz jumped onto the stage, as the sense of being on a crowded Tube carriage in summer was getting a little much. If he was feeling any sense of nervousness about presenting music without the comfort blanket of Supergrass, he didn't show it, and even managed to stop the music to fix a technical gremlin and restart without once sounding remotely tetchy. The focus was on his the upcoming debut solo album Here Come The Bombs, including the lead single Hot Fruit, which might not have worked with the crowd but for the genius of Gaz's songwriting, which makes the unfamiliar sound instantly familiar. The songs were upbeat, powerful and embracing – everything you would expect from the Oxford man.

Expectations were also fulfilled at the Corn Exchange. I didn't stay for long, but I had to check out Mystery Jets. They won the prize for the most speakers, lights and dry ice, but they had a space to fill and a huge crowd to please, and they didn't waste a single bit of any of it, right from the opening bar. It may not not have entirely been to my taste but I suppose the beauty of a festival is listening to new things with an open mind and, maybe, finding something that gets to you.

When I was too late to get in to Django Django (I shall catch them instead on Friday) at the Pavilion Theatre, I wasn't sure whether I could face trekking in the cold to see anything else at gone midnight. But I was told that White Arrows were good, definitely worth seeing, so I shook off any tiredness and headed over to Sticky Mike's Frog Bar. As they plugged in and set up, I wasn't expecting much, based on their student recycled chic, but they were talking an awful long time to get ready, and it started to dawn on me that this outfit might be a little out of the ordinary. They announced themselves as from California and then burst out in a ringing, looping clash of sounds that sounded like a million things at once and yet entirely original. They managed to pull off the trick of having a wall-of-sound feel while making every instrument and voice perfectly audible, which meant that the funk-laden driving bass wasn't drowned out by the chiming guitars or the echoed, layered voices, and the drums could literally beat their own path through the music. I could sight 1001 influences and absorbed ideas to give you a sense of their sound, but it would get tedious and sound like I am name-checking my own musical knowledge. Instead, what I will say is that they were upbeat and sunny inside that noise cloud, and I would be surprised if the majority of people who were at the gig don't wake up the next morning thinking that White Arrows might just have been the best thing they saw that day.