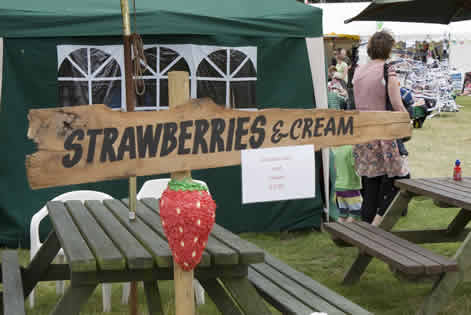 Before rocking up to the Deer Shed Festival on Friday evening I didn’t really know what to expect. Billed as a family friendly music festival that is only in its second year I was a little apprehensive. I don’t have children and was worried that the music may play second fiddle to the kids activities. I needn’t have worried, despite not having heard of half of the bands performing, they were all spot on, and I have come away from the festival with a list of bands I will definitely be keeping an eye out for in future.
My first impressions of the festival were good, it was well signposted, once I made it to Topcliffe, and I was directed straight into a parking spot and pointed in the direction of the campsite by the helpful steward who also advised me to ‘weave between the cars’ to get to the entrance as it was quite a way! Loaded up with armfuls of bags I went in search of a pitch. Once past the campsite entrance I noticed the scout camp, scouts were on hand to help carry your things from the car, very helpful once I’d already carried it all that far!
So, tent pitched it was time to find the ticket exchange which could only be described as organised chaos. It was here I got my first indication of the family friendly approach to the festival as children get their own wristband, on which their parents name and telephone number is written, just in case. After a short queue I had my wrist band and less than an hour of arriving I was ready for the arena. The festival has more than doubled since its debut last year so the organisers and stewards did a brilliant job getting everyone in and keeping everyone (including the children) happy and upbeat. The same organisation and thought could be seen throughout the festival, two of the stages had the beer tent under the same marquee! I was also pleasantly surprised to find that the extortionate beer prices often found at festivals were absent from DSF with a pint of lager costing £3.
My first impression of the actual festival was of a laid back and relaxed atmosphere. Knowing that people would be arriving throughout Friday evening the organisers kept the entertainment relaxed and light. With a cabaret in the Big Top, an illusionist in the Deer Shed and bands on the In the Dock Stage there was something for everyone. The first band I saw was Two Spot Gobi, in their own words they aim to “put smiles on people’s faces”, and they did. Next stop for me was the cabaret which did remind me of the entertainment you might find at a holiday park, definitely aimed at children, and the children (who made up the majority of the audience) certainly loved it. Wandering back towards the music, again I couldn’t help but smile, Hope and Social were doing a cover of ‘Call Me Al’ by Paul Simon.
Saturday morning and people were still arriving, 5000 adult tickets were sold for this festival, and that didn’t include the children. The increase in numbers was immediately noticeable in the main arena, but there was enough going on that whilst each stage was crowded, it was still quite easy to get to the front if you wanted to, each performance felt intimate. During Saturday, three of the stages were dedicated to bands and music while the other two held children's workshops. The way the music programme had been worked out, the bands start times were staggered meaning that there was no mad dash between stages to see everything. The most chilled out of the stages, with much of the audience lounging on the grass, was the Key Production Stage which opened with Yonder Boy, a band I’ll be keeping an eye out for in the future. Back on the main stage the quality of the line up was clear from the large audience mostly dancing all afternoon. Demanding movement from the audience was The Go! Team, the band are captivating and it’s hard to stand still when watching them. Lead singer Ninja worked the crowd brilliantly with her high energy and enthusiasm. The Go! Team (who played Glastonbury earlier this year) were the perfect warm up act for the headliners, I Am Kloot. By the time the headline act took to the stage all other music at the festival had ended so everybody came to watch this band (who are due to play at the V festivals later this year). Their performance was certainly one not to be missed and well deserving of the headline spot.
Like Friday evening, Sunday morning was chilled out as people concentrated on packing up their tents.
In summary this festival does exactly what it says, provides a relaxed and safe environment for festival goers to enjoy with their family, young and old. The usual problems with festivals such as litter, high entry fees, expensive catering and poorly cleaned toilets are not problems for DSF. I recommend the festival to everyone, with or without kids. A thoroughly enjoyable weekend, I will definitely be going back.