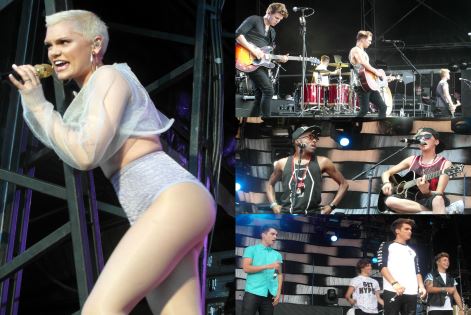 Every year The Sound Island Festival is one of the biggest and most awaited events to hit the Kent region, being held in Quex Park in Birchington-On-Sea, near Margate.

Due to the brilliant organisation and not forgetting the massive line-ups that have been bought forward to music fans since 2008, the festival keeps coming back for more and this year was set to be BIGGER and better than ever with the in-demand acts that were set to storm the stage on the two-day event.

With past performers including JLS, Madness, N Dubz, Olly Murs, The Pussycat Dolls and many more, there was a high expectancy of who would be on this year’s bill. So when ‘She Said’ rapper Plan B, the UK’s answer to Rihanna - Rita Ora and 2012’s X Factor winner James Arthur were announced for the Saturday line-up, festival fanatics everywhere were keen to book their tickets. Support acts also confirmed for the Saturday 27th date were influential rapper Giggs, singer Bebe Black and Little Nikki, who is on MTV’s ‘10 to watch in 2013’ list.

Attending Sunday’s show, it was easy to see that family fun, entertainment and a large variety of food and drink offerings were all on the agenda. Plus with a massive list of musical geniuses’s set to take the stage and the sunshine weather on side, what more could you ask for?

Being In Partner with Heart FM radio meant that breakfast presenters James and Charlie were on hand to introduce each act and entertain the crowd pre-performance.

Pop heartthrobs Union J were the first act of the day, making a lengthy appearance. Since finishing in fourth position on the X Factor last year the band, who is made up of Josh, George, JJ and Jaymi have had a huge following. The hyped crowd were certainly pleased to hear their recently released debut single ‘Carry You’ performed live, as well as tracks that they performed whilst on the TV talent show in 2012. Their debut album is due for release in October this year and with the band also having a headlining tour starting at the end of this year and following through to the next, continuous success is unquestionably on the cards for the four piece.

Glam rock band Joywride were next to perform and were another act that added onto to the talented characters supporting the big names on the 2nd day of this star-studded event. An impressive set was given out from the band, who are a reminiscent cross between the Scissor Sisters, who have a club-oriented sound and ‘I Believe In A Thing Called Love’ rockers, The Darkness.  Joyride are definitely one to watch out for.

Acoustic - driven Indie pop band The Vamps have supported a number of iconic bands, including McFly and The Wanted. The Youtube sensations bought a range of their sing-along songs to the stage, also throwing in a great cover of punk rockers Blondie's 'Teenage Kicks'. The four piece are definitely one to look out for this year and the crowd seemed to agree by chanting their catchy lyrics back to them.

Traditional dubstep duo MK1, who consist of Charlie Rundle and Sim Dixon were the first urban act to progress onto the live shows in the X Factor last year. The pair warmed up the crowd with some great acoustic covers, including Rihanna’s ‘Diamond’s, Rizzle Kicks’ ‘Mama Do The Hump’ and The Jackson 5’s ‘I Want You Back’. MK1’s debut single added the final touch to their urban setlist.

It was a double boyband whammy with multi-talented man band Lawson also on the line-up. The band had female fans pulses racing when they performed tracks from their debut album ‘Chapman Square’. An impressive cover of ‘Don’t You Worry Child’ by Swedish House Mafia was a special surprise in between their own songs. Members Andy Brown, Ryan Fletcher, Joel Peat and Adam Pitts are four extremely talented young men. They have come a long way since their very first single ‘When She Was Mine’ was released last year and with their constant radio airplay, appealing charisma and exceptional set they are definitely here to stay.

Referring to the term of ‘time flies when you’re having fun’ various hours of mind-blowing performances rushed by and with only one act left to perform that is global phenomenon Jessie J, it was sure to be a triumph to the day.

Jessica Ellen Cornish, better known by her stage name Jessie J, has been the talk of the town since releasing her debut single ‘Do It Like A Dude’ back in late 2010. Whether its for her ever growing talents of singing, performing, song writing, charity work, or having a seat on BBC 1’s show The Voice for the past two years that she has become recognised for, this iconic soloist is very much loved by the nation.

Of course we look up to this unique talent especially, due to the fact that she has presented us with notable pieces of advice and highly amazing tunes over the years, telling us that ‘Nobody’s Perfect’, to ‘Stand Up’, be true to ‘Who You Are’ and to forget about the ‘Price Tag’.

Jessie appeared to be tremendously pleased to be headlining the festival before her UK tour begins later this year. The female artist proved that she has a lot of love for her fans, of whom she has labeled her 'Heartbeats' since the start of her career.

The stage lit up when Jessie took to it, as a result to her spectacular stage presence, dazzling getup and blonde hair, which has become a statement for the singer since shaving off her original black bob for Comic Relief earlier in 2013.

Kicking off her set list was the UK number one ‘Price Tag’, followed by ‘Rainbow’, plus other smash hits 'Laserlight', ‘Abracadabra’, ‘Casualty Of Love’ and a knockout performance of her latest single featuring Dizzee Rascal and Big Sean 'Wild'. Jessie also threw in a brand new track from her next album and a 80’s cover medley, which were magnificent highlights to the show.

The band and vocalists of whom assisted with Jessie’s time on the stage were absolutley tremendous and are definitetly skillful musicians themselves, which was visible to see when each of them took their own individual time in the spotlight, whilst Jessie left the stage for a quick outfit change returning wearing a branded white t shirt, along with a baseball cap and black lipstick to belt out ‘Do It Like A Dude’ along with showing some hip hop credability and asking the crowd to do the same with pulling their best ‘hip hop swag faces’.

Jessie J has one heck of a voice with a sensational vocal range and is without a doubt sincerely grateful for all of the opportunities that have arisen her way, thanking everyone who came along to see her. The Essex lass completed her remarkable set with an energetic performance of ‘Domino’ and was on top form throughout.

With a second album to follow next year, Jessie J will persist in being the gifted soloist that she is for many years to come.

Crowd goers will be twiddling their thumbs for the announcement of 2014’s line-up. Everyone everywhere will be rushing out to buy tickets for next year’s event in no time.

Published on 29 July 2013 by TasminAnderson