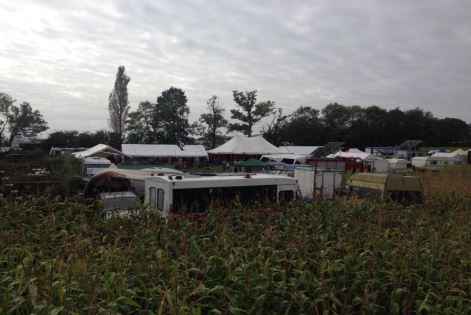 I was lost in a maze as the sounds of gypsy-metal band Who Killed The Bear echoed around the site. I was of course at Something Else In the Dean, a festival run by festival-goers for festival-goers. This is the last festival of the season and for many crew it’s the first weekend of the summer they’ve had off.
One of the things I love about the grass roots, old school Something Else festivals is that even though they’re not the biggest festivals in the world, the music is of such a high quality. Highlights included Acoustic Punk Troubadour Gaz Brookfield who, despite just being one man and a guitar, brought an anthemic festival sound that had everyone singing along and warmed up for the weekend.

On Saturday afternoon New Groove Formation got the whole crowd bouncing with their tight live show and sunshine tunes. As Saturday night’s music drew to a close 5-piece festival legends Back To the Planet took to the stage. With lead singer Fil’s unique vocal styling and quality, and Rock ‘N’ Roll guitarist Fraggle making it look easy, BTTP had the whole crowd in their hands. The set climaxed with ‘Turtles’. The killer tune kicked in with an infectious riff complimenting the punk-tinged keys. There were 5 minutes of waiting before they came on for an encore – surely that’s a sign of a cracking set.

There are far too many bands to mention but other acts across the weekend were Celtic-Dance-Folk-Punksters Tarantism; festival favourites Leatherat; live funky hip hop from locals Boys In The Wood; one man industrial harmonica-playing looping machine Funke & The Two Tone Baby; Les Carter’s Abdoujaparov with special guest birthday brother Brian Carter; anarcho-folk Muddy Summers; and last but never least headliners Inner Terrestrials.
Further out and back into the maize was an intimate stage set under a pear tree. Not only was it a perfect place to chill but also a great setting for acoustic music, which could of otherwise got lost in a bigger area. I lay down in the sunlight and listened to afro-roots duo TwoManTing who really drew a crowd despite their stage being further out than the others.
There is not a massive kids area at Something Else In the Dean but the festival is perfect for families. Not only is the festival relaxed and safe but there is also lots of space for children to run around together. All the stages are near to the kids’ stuff so you can watch a band while playing with your child. In between the alternating stages; the Warren James & the Something Else stage, was a climbing frame dome with ropes and hammocks etc. Kids also joined in with Labyrinth Arts’ workshops and active games. And if that wasn’t enough for you there was a second adventure maize, with tunnels, slides, and never ending circles to get lost in (when I tried it in the dark at least!)
As Sunday came punters walked onto the site, feeling that they most definitely gave Summer 2014 a good send off the night before. Lots of people gathered at Nana’s Kitchen. Nana’s really is the place to go for a freshly cooked scrumptious breakfast in the mornings (the best ever festival porridge, rocky road, chips and mash – not to be eaten all together mind!). The Devil’s Prefects opened the day who, even though it was midday, had the whole field singing along to instant classics ‘Knocking One Out For Jesus’ and ‘We’re Going To Get Shitfaced.’ Their wit and charm travelled through the festival even to the other stage where I was sound checking.
Another thing I must praise is the on-site shop, on the way back from the festival we stopped off at the Chipping Norton off licence and the prices were more expensive there. Which just shows that the Something Else crew’s grass roots ethos of treating everyone fairly (the bands, stewards, punters) is truly genuine. The bar had a large selection of Beers, Ales and Ciders served at £3 a pint. I also loved the homemade cakes – especially the chocolate one!
The Something Else Tea Tent and its festivals create something special in the festival circuit. If we were to lose this spark, it would be greatly missed. My advice is to get yourself a ticket to Something Else Somewhere Else before they all sell out – and they will!

Published on 22 October 2014 by Ned The Kids Dylan