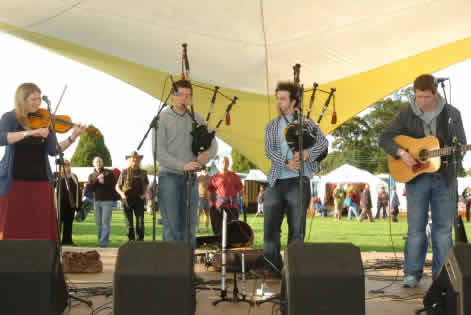 'I am your new patron and you will obey me!' This was how Steve Knightley of Show of Hands broke the news to an uproarious Shrewsbury crowd that he had agreed to be co-patron of the festival. The crowd was unanimous: I think it was a popular decision!

The festival kicked off with rocking blues band Babbajack. The vocalist manages to team energy with intimacy and the guitarist plays resonator and his home made wine box guitar for a unique sound. It was a fantastic opening set. They told me that they had a great time.

Luckily festival favourites Uiscedwr ably followed this with one of their last ever festival gigs. The magnetic Anna Esslemont together with the percussionist/ bodrahn player Cormac Byrne was a must see. The band has regenerated with additional members including Anna's sister to form the band BAD Anna. The Shrewsbury audience was in for a very special treat when BAD Anna premiered at the festival the following day. There are inevitable echoes of Uiscedwr but the new material has a more contemplative feel. The reception was excellent with a standing ovation from a discerning crowd.

If you are a bit nervous about festival camping, Shrewsbury is perfect for you. There is plenty of room, you can camp alongside your friends, and the music venues are all seated and undercover (stage one does have a mosh pit for those who like this). There are 150 indoor (yes, indoor) toilets and lots of hot showers. It's also a great festival for wheelchair users and anyone with less mobility: the whole festival is on flat ground, reserved places at the front, battery charging for electric scooters and wheelchairs. There are lots of stewards and they are the most relaxed I have come across, which makes for a great festival. They definitely deserve congratulating.

I also need to mention that there are 45 reasonably priced real ales on offer - my neighbour's ambition being to try them all! You can also find good priced food - I over indulged with 16 pieces of fudge from the delicious Little Yellow Sweetshop.

Cara Dillon finally brought her beautiful voice to the festival after not being able to play last year. She was on before the explosive Bellowhead; they were just such a great opening night headliner to the festival.

I have seen Martyn Joseph before but his outstanding set was really something special. I have never seen a festival audience so in tune with the artist and Joseph was obviously overcome at the reaction.

I also caught up with an old friend BBC radio presenter, Genevieve Tudor. We chatted about how we missed the BBC bus this year. Genevieve told me that one of her highlights was Lucy Ward.

Lucy Ward is an emerging talent. She was born with stage presence and played an amazing set. Her voice is like an angel's and she's hilarious too. I caught up with her after her gig. Lucy was excited by how well she had gone down at the festival and I also asked her whether she had caught any good acts. Lucy had a firm favourite: newcomers Walsh & Pound.

This brilliant duo definitely caused a buzz around the site, managing to play nearly all the venues and the fringe too. Dan Walsh's Banjo is incredible and Will Pound's harmonica fast paced and so versatile. These are definitely a duo to watch out for.

I admitted to Lucy that she was one of my personal highlights too, along with Show Of Hands and The Imagined Village.

The Imagined Village started as a project but touring extensively, it has become more of a supergroup in a short time. It is a collaboration with big talents, including Chris Wood and founder Simon Emmerson. I personally think the band has an interesting take on the folk tradition with heavy bhangra beats topped by Eliza Carthy's vocals or Jackie Oates on viola. Sadly Martin Carthy wasn't with the band on the night but is set to return next year.

I think a special mention should go out to a great compere called Terry Walden. When I spoke to him he told me that he enjoyed Show Of Hands and Chris Wood.

The line up at Shrewsbury is always top quality and it is impossible to see all the bands. This festival also stands out for its impressive fringe. Many of the bands and dance teams play several sets at the festival site and local pubs. I am particularly impressed with the quality of the less well known acts; you will never be disappointed.

An example of this is the young Welsh talent, Calan. They made it to the main stage having impressed last year at the smaller venues. The band is fairly traditional with plenty of clog dancing percussion - they did not put a foot wrong however and have lodged themselves in the heart of the festival.

Shrewsbury Folk Festival is one of the most family friendly festivals in the country with tons of interesting art, dance, music and drama workshops for all ages including a lantern making workshop, drama classes, a lazytown sports club, the ever popular and in constant demand Panic Circus and lots more. I went to the blues guitar workshop with Brook Williams. I learnt so much and was dying to get home to practice all he taught us.

I interviewed the very dedicated Maggie Love - she is the drama coordinator. She told me that she loves the impromptu approach to the drama and song workshops where all the ideas come from the children. This means however that she has to do much of the preparation as she goes along - she did not even get to see any bands this year. The children's art, drama and music workshops culminate in a performance on the village stage. This is really special for the children and I have fond memories of being Charles Darwin in the show a few years ago.

I tend to get into a tangle at Ceilidhs so steer clear for the sake of everyone. But I do know that some people return year after year for the full ceilidh programme alone. It has its own impressive marquee with a sprung floor and this year it played host to Bellowhead superstars, Boden and Spiers as well as other great bands.

I joined Steve Knightley for a relaxed breakfast interview after his Sunday night double set with the Cecil Sharp project. He told me that he really likes all aspects of the festival. His musical highlights included The Imagined Village and Martyn Joseph. But Steve also likes the bags of space the site offers to punters, that it looks after the artists well with the chance for a proper sound check, and that the festival organisers listen to what people want. On this note he had understood that people find stage two lacking in atmosphere. This is probably my only criticism and it is very minor, but you can see some very energetic bands there and the audience does not have an area where it feels acceptable to dance. But overall Shrewsbury is spot on and Steve and I agreed that the ticket pricing offers an unbelievable deal.

On the final day, co-patron John Jones headlined with his Oysterband. During the set they welcomed on June Tabor. Her voice is so powerful and gave depth to covers of Joy Division and Velvet Underground. By way o finale, they welcomed on Sandra and Alan Surtees (the organisers), Steve Knightley and June Tabor for an acapella rendition of Rising Star. It was the most moving ending to a great festival.

Everyone I spoke to said they would definitely be back next year. So my advice is get your tickets early because it is set to be another sell out!

Published on 30 August 2011 by Ned Mansfield